That was the case for two B1G rookies.

Former Ohio State tailback Ezekiel Elliott and former Michigan State offensive tackle Jack Conklin were both named to the Associated Press All-Pro team. They were two of three rookies to make the cut. That hasn’t happened since 1981.

Elliott’s honor came after a season in which he fell just short of Eric Dickerson’s rookie rushing record. The No. 4 overall pick led the NFL in rushing and led the Cowboys to the No. 1 seed in the NFC.

“It’s special,” Elliott said to the AP. “Just to be able to come into this league my first year and dominate and just play at the level I’m playing, and just kind of get these honors already as a rookie, it means a lot. I was never even All-American in college. I was never a first-team All-American. I’ll never get a Buckeye tree at Ohio State. That’s the one thing that I regret the most.

“Kind of seeing it come into the league and making All-Pro this rookie year, it definitely means a lot.”

Conklin has been a key part of the Titans’ offensive turnaround. Along with former Michigan first-round pick Taylor Lewan, Conklin paved the way for the league’s No. 4 rushing attack. The No. 8 overall pick was the only rookie lineman to make the All-Pro team.

Conklin and Elliott were two of four total B1G players to make the team. The other two, Sean Lee (Penn State) and Travis Frederick (Wisconsin), were both Cowboys.

Here were the complete teams: 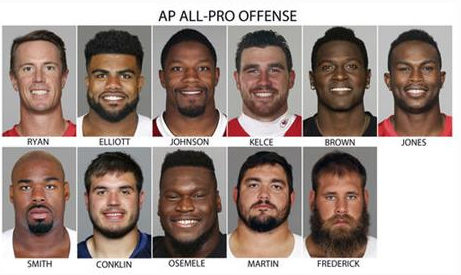 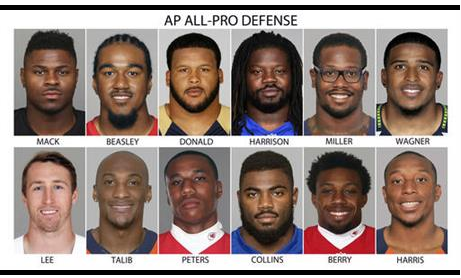