Lost in the shuffle of all the excitement on Saturday’s playoff-potential games was the fact that the B1G earned three more bowl berths.

Indiana, Maryland and Northwestern all earned their sixth wins and clinched postseason trips. That meant that we won’t have to figure out who leads the country in APR. Minnesota and Nebraska had to deal with that as five-win teams last year.

Here are the B1G teams that will play in the postseason:

Now, a banner regular season for the B1G has the potential to be a banner postseason.

Here’s how the final Saturday went down and where each new B1G bowl team could end up:

The Terps, of course, had the easiest final day of a B1G team on the bowl bubble. Taking care of Rutgers is something every B1G team did in 2016. The Terps did more than enough to make sure that they didn’t stub their toes.

As a result, DJ Durkin’s first season in College Park will continue into December. That’s a remarkable accomplishment in itself. Many are going to look at the Terps’ -33 scoring differential and say that they just got lucky the bowl system is so saturated.

But unlike most Power Five teams, the Terps played not one but two road games in non-conference play. One of those was against a UCF squad that’s going bowling itself. Maryland had every right to celebrate its sixth win on Saturday.

Maryland quarterback Caleb Rowe had a different reason to celebrate:

Now, a young Maryland team gets another month to practice with its first-year head coach. The benefits of that are tremendous.

The question now is where will Maryland end up. Early signs point to a trip to Detroit.

A lot of people expected the Wildcats to clinch a bowl berth last week at Minnesota. Northwestern looked like one of the better five-win teams in the country at the time.

Instead, the Wildcats’ postseason bid was locked up a week later against intrastate rival Illinois. And it came in convincing fashion. How about FIVE rushing touchdowns? Three of those came from Justin Jackson, who continued his first-team All-B1G season with 173 rushing yards.

Look at the patience he showed:

Thanks to another huge day from Jackson, Northwestern is going to its second consecutive bowl game. The Wildcats might not be the 10-win team that earned an Outback Bowl bid, but they certainly have much more offense than that group had.

In a perfect world, the Wildcats would earn a trip to California to play in the Foster Farms Bowl. Unfortunately for them, Indiana played in the Pinstripe Bowl last year. That game rotates between six-win B1G teams. 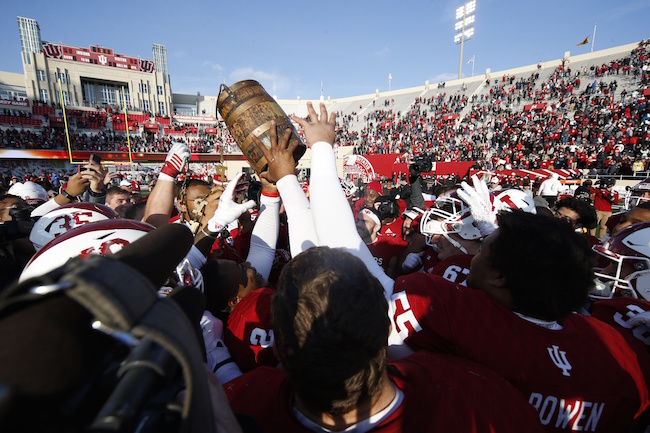 The Hoosiers didn’t roll to a Bucket Game win like many expected them to, but they locked up their fourth-straight win against rival Purdue. That definitely means something in Bloomington.

You know what else means something? The fact that the Hoosiers clinched consecutive bowl berths for the first time in 25 years.

Are they building Kevin Wilson’s statue yet?

Based on the way this season went, defensive coordinator Tom Allen would deserve just as much, if not more praise. His defense was huge in a rare subpar offensive season for IU. On Saturday, IU held a very solid Markell Jones to 35 yards on 22 carries.

The Hoosiers figure to put up a much better defensive effort than they did against Duke in the Pinstripe Bowl last year. Speaking of the Pinstripe Bowl, don’t expect IU to return to New York for a second straight year. IU could make a little trip out West.