Here's where every B1G school ranked in home attendance in 2016

It wasn’t much, but it was something.

The average B1G attendance in 2016 rose to 66,162, which was an increase of less than 1 percent (via CBS Sports). That was second only to the SEC, which once again topped all Power Five conferences with 77,565 fans per contest.

But the B1G did have the advantage at the top of the national leaderboard, with Michigan and Ohio State sitting at No. 1 and No. 2, respectively: 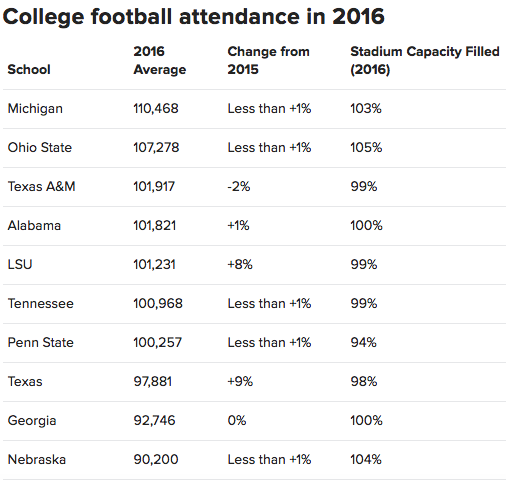 Including Penn State (seventh) and Nebraska (10th), that was four B1G schools in the top 10. The B1G and SEC actually made up nine of the top 10 attendance leaders.

As for the rest of the B1G, some schools had more dramatic changes than others. Minnesota had the second-biggest decrease in home attendance (down 16 percent) and Maryland had the fifth-biggest decrease at 11 percent.

On the flip side, Iowa and Illinois ranked fourth and sixth, respectively, in attendance increases at 10 percent.

Here’s where each B1G team ranked nationally, as well as what their year-to-year change was: