Is October still a potential start date for B1G football? To at least one coach in the conference, the answer is “yes.”

Thursday, Tom Dienhart of Gold and Black Illustrated reported on a conversation he had with an unnamed coach in the conference. And while October seemed to be off the table when the B1G postponed the fall football schedule, that anonymous coach says playing before Halloween is still a possibility.

Whether or not it will actually happen is another matter entirely. But, as of right now, it appears that October is still on the table.

Below is the conversation Dienhart posted to Twitter on Thursday:

Me: Is playing in October possible?
Coach: That’s definitely part of our discussions right now.

Me: What did you think of Ryan Day's statement? Wow.
Coach: Your response was the same as mine!!!

The response to Ohio State head coach Ryan Day’s statement on Thursday was similar to what the rest of us had. Day called for the B1G to provide transparency and open the lines of communication behind the decision to postpone the season.

He blasted the B1G for its shortcomings in those areas, and said a mid-October start date was possible. Below is the message Day sent out on Twitter: 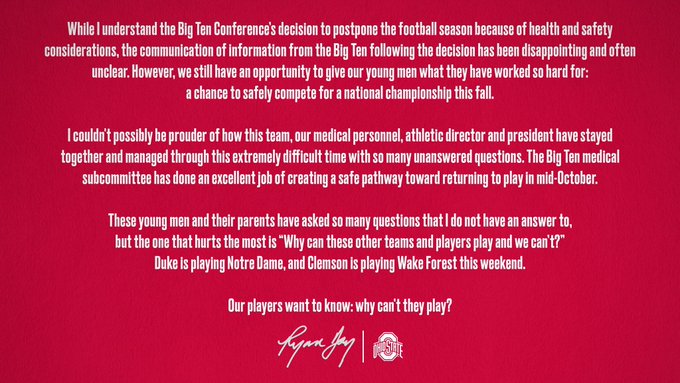 For now, it appears that everything is on the table for the B1G. That, or nobody actually knows what’s happening in what was considered one of the most prestigious conferences in all of college athletics.