Who wins B1G Coach of the Year? We debate the top three candidates

Coach of the year rarely goes to the conference’s best coach.

As in, Urban Meyer and Jim Harbaugh aren’t winning the award anytime soon. Why? Well, they don’t get as much credit for meeting expectations, even though they could end up having the best seasons of anyone in the B1G.

Coach the year may as well be “Surprise Coach of the Year.” The B1G has three candidates that surprised many in 2016. Here are the best:

The case for Mike Riley:

Mike Riley has been tested in a lot of ways this season.

On the field, off the field, in the media — there’s really not any facet where Riley’s leadership skills haven’t been challenged.

It started in July, when All-B1G punter Sam Foltz was killed in an automobile accident in Wisconsin — the most devastating type of tragedy anyone could ever encounter.  It continued into the regular season, when Michael Rose-Ivey and others took public criticism from fans and high-ranking officials for kneeing during the national anthem as a form of protest.

In both situations, Riley stood with his team.

Following the Foltz accident, he and University opted not to travel for B1G Media Days and allowed time for the players and coaches to mourn as a family. When Rose-Ivey was blasted for his stance, Riley was there again, supporting the voice of his players.

On the field, Riley has been pretty good, too. That 5-7 mark the Huskers posted last season almost seems like a misprint.

The changes that everyone was begging Riley to make were implemented. Instead of watching Tommy Armstrong Jr. sling the ball around the field 35 or 40 times per game, the rushing attack with Terrell Newby and Devine Ozigbo has become more prominent.

How about that awful pass defense the Huskers trotted onto the field last year? Yep, that got fixed, too.

Nebraska is allowing 70 fewer passing yards per game this year and already has 16 interceptions through 10 games. Last year, the Huskers nabbed just 10 picks in 13 games.

For the first half of the season, Nebraska was back in the good ole days. Its name was dropped in conference title conversations and even as a national contender. The Huskers were 7-0 before dropping their first contest to Wisconsin, an overtime thriller at Camp Randall Stadium.

The 62-3 loss at Ohio State was ugly. Certainly, losses like that aren’t a favorable sight for a Coach of the Year candidate. But I’d ask you to consider the following: right now, at 8-2 with two weeks remaining in the regular season, Nebraska is on the brink of a 10-win season.

Producing those type of results in the presence of tragedy is pretty damn remarkable.

You also can’t ignore the challenges and affliction Nebraska has endured this season. And through it all, Riley has his team enjoying an extraordinary amount of success on the field.

To me, that’s the true sign of a coach worthy of the award. 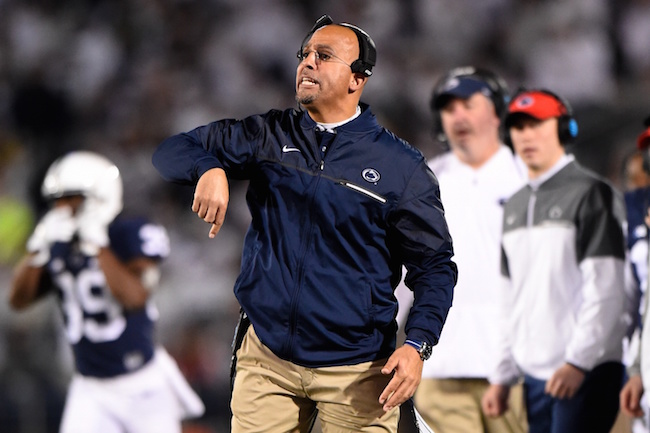 The case for James Franklin:

Seven weeks ago, Penn State was an afterthought. The Lions were embarrassed in Ann Arbor in every possible way. At best, it looked like the Lions were looking at a seven-win regular season and heading to another lackluster bowl.

It’s Nov. 15, and Penn State might be the favorite to win the B1G East. The B1G East, you know, the division with Michigan and Ohio State. That was the division Franklin was never going to win, remember?

Six straight wins turned the Lions’ season around and put them in unthinkable position with two weeks to play. Franklin was sitting there at 2-2 with as injury-riddled of a defense as you’ll ever see and the second-youngest team in America. To think that the Lions just have to beat two teams with a combined 1-13 B1G record and they’ll have a shot at Indianapolis is remarkable.

RELATED: Make no mistake, that was the toughest win Penn State earned all year

Keep in mind that Franklin is doing this with two first-year coordinators and a new position coach at PSU’s most-vulernable position. He also lost four NFL defenders and has a first-year starting quarterback.

This wasn’t a place like Indiana where Franklin had to overcome those things. He had to deal with that pressure — and hot seat speculation — at one of college football’s traditional powers. Even an eight-win season would’ve been impressive under those circumstances.

Franklin has his eight wins. But amazingly, he has his squad in position to do much more damage. 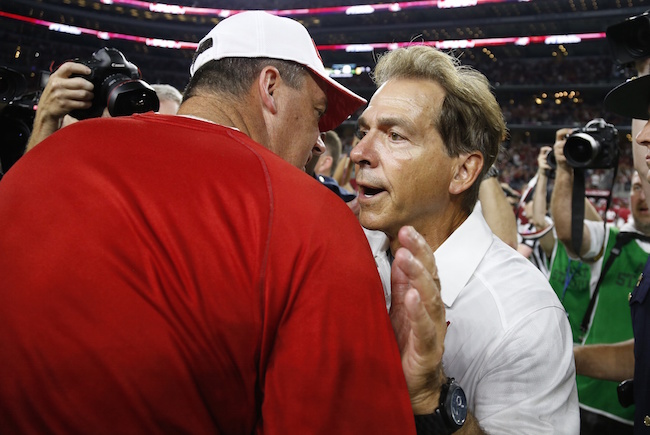 The case for Paul Chryst:

The Badgers are going to get crushed by that brutal schedule. It’s one thing to start the season with a top non-conference opponent like LSU. But how in the world did the Badgers draw the B1G’s top four teams in the first four conference games? Man, a 2-5 start. Ouch.

Remember when that was the Wisconsin narrative? Chryst took Paul Bunyan’s Axe and smashed it to pieces.

It’s mid-November and this team is somehow still alive for the College Football Playoff. Yes, the team that was supposed to start off 2-5 has the clearest path of any B1G team to the conference championship. Go figure.

Chryst deserves a ton of credit for that.

Oh, his world-class defensive coordinator left for greener pastures? No problem. His new DC, Justin Wilcox, is leading the No. 3 defense in the country.

RELATED: For the first time all year, Wisconsin could use some style points

Oh, he doesn’t have a quarterback with any experience? No problem. He got an unconventional two-quarterback system — one that few coaches would dare to try — to help jumpstart his offense.

Oh, his team suffers key injury after key injury? No problem. He’ll just plug in the next guy and coach them up to play at the All-B1G level of their predecessor.

Everyone keeps waiting for Wisconsin to fall apart against quality competition. But this team played start to finish with four teams ranked in the current top 20. Chryst has this team believing it can win a B1G title and become the first two-loss team to make the College Football Playoff. With that schedule, that’s still unbelievable.

Forget B1G Coach of the Year. This guy might win national coach of the year.