Ranking B1G coaches from least to most job security

It’s always worth keeping an eye on.

What would it take for a coach to get fired? One bad season? Two? Three? Some coaches have shorter leashes than others, though no B1G coach appears to be on the hot seat entering 2017.

It is, however, interesting to think about what it would take for each B1G coach to fall out of favor with his program.

Here are the B1G coaches ranked (by group) from least to most job security:

One Horrific Season Could Do It

Why — To be clear, Riley is NOT on the proverbial “hot seat.” That implies if he doesn’t meet expectations, he’ll be fired. That shouldn’t be the case. Winning three or four games, however, would make it a legitimate topic of conversation in Lincoln. Nebraska athletic director Shawn Eichorst did put it all on the line to fire Bo Pelini and make Riley the surprise replacement. But Riley’s contract runs through the 2019 season, which means that if there’s enough heat, Eichorst could pull the plug after sub-.500 records in two of three seasons. 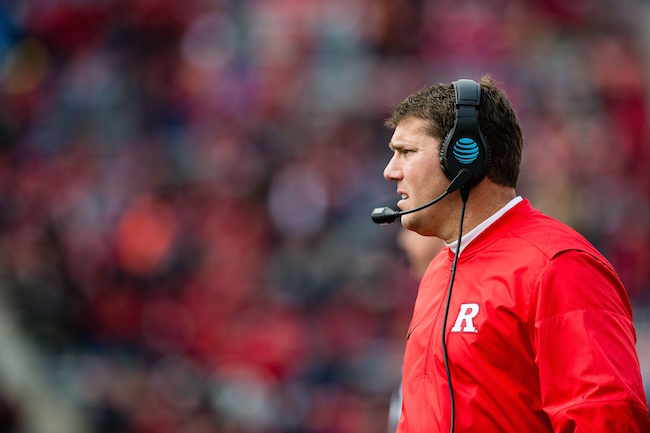 Still At Least A Year Away From ANY Heat

Why — To Ash’s credit, he ran a clean program in his first year at Rutgers. He had to survive the pending NCAA hammer from the Kyle Flood investigation. As long as there’s no postseason ban, he shouldn’t have any off-the-field restrictions on recruiting. If he only wins two games and looks like the worst Power Five team in America again, however, that leash will get much shorter.

Allen is a wildcard because he was a gamble to begin with. The terms of his contract are unknown — other than that he’s on a six-year deal — but one would think Fred Glass put a friendly buyout in there just in case. Basically, Allen just can’t stoop to the level Darrell Hazell was at in West Lafayette. 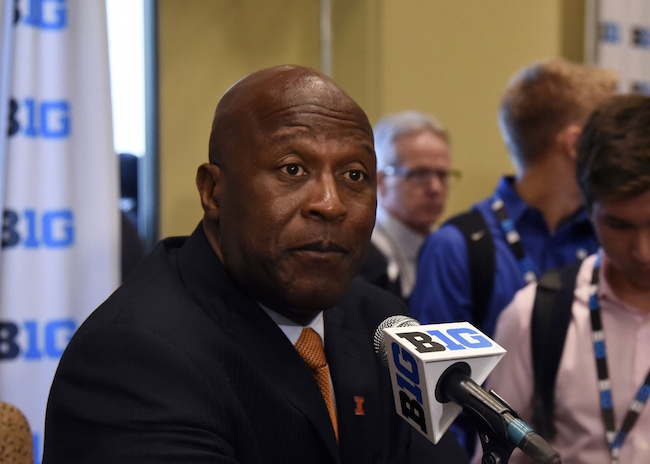 Why — Smith and Durkin are in different stages of their on-the-field rebuilds after one year. Illinois athletic director Josh Whitman put all his chips to the middle of the table to hire Smith. He would need a couple more three-win seasons for Whitman to even think about punting on his first big hire. As long as Smith shows some sort of improvement, he isn’t going anywhere.

Durkin, like Smith, must avoid regression. He set the bar high for himself with six wins in Year 1. With a tougher schedule in 2017, the Terps would actually show great improvement by winning six games again. And with the way that Durkin recruited in his first full cycle, the odds of him winding up on any hot seat for the next two years is unlikely. 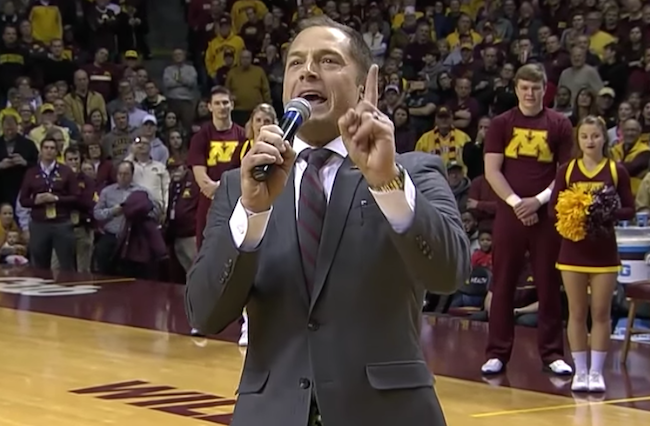 Why — Brohm and Fleck were both considered by many as slam-dunk hires. They injected new life into programs that needed it (Minnesota’s nine wins was clouded by the bowl boycott). Brohm is working with a low bar to exceed. It’s not asking for much to improve on a 3-30 conference record the last four years, especially in the B1G West. If Brohm can get fans back in the seats and at least flirt with bowl eligibility, he’s more likely to get extended than fired.

Fleck has different circumstances to work with. Minnesota coughed up some serious coin — $18 million over five years — to make a splashy hire. Like Jim Harbaugh, Fleck came to the Twin Cities with his own brand. That’ll make him more scrutinized or more celebrated with every move he makes. As long as Fleck doesn’t spend the next three years getting out-coached and missing bowl games, his job is safe.

The bigger concern for guys like Brohm and Fleck is that they win eight or nine games in their third year and promptly bolt to even better jobs. 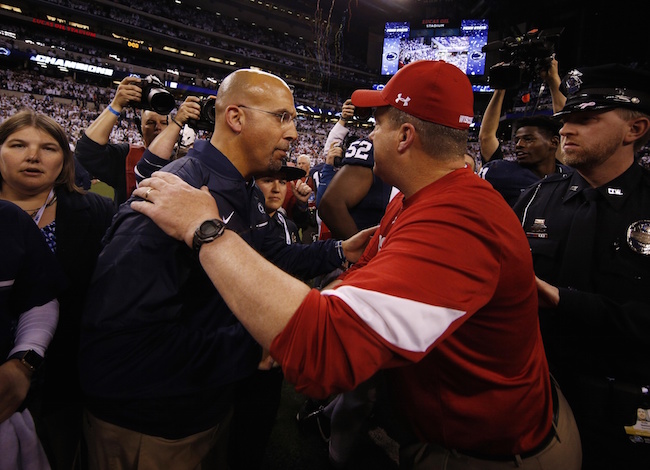 Why — The B1G’s Coach of the Year winners are both coming off incredible seasons that defied expectations. You won’t find them looking for work anytime soon.  The biggest deterrent to their job security is time.

Yes, Chryst won more games than Harbaugh in his first two seasons. All signs point to him racking up a bunch of double-digit win seasons in Madison and becoming one of the best coaches in program history. But two years is a small sample size, and for the most part, he won with players that Bret Bielema and Gary Andersen recruited. Wisconsin hasn’t missed the postseason since 2001. Wisconsin won double-digit games in eight of the last 11 seasons. There are expectations to be met on a yearly basis under Barry Alvarez.

Franklin is riding more momentum than any B1G coach right now, but that momentum started just five months ago. Six months ago, Penn State AD Sandy Barbour had to declare his long-term security. The 2016 season was magical for the Lions, but it’s a distant memory if Franklin lays back-to-back eggs, especially with how high expectations are entering 2017. It’s not easy to fall off the radar in the B1G East. Just ask Michigan State.

A scandal — something within the program that receives negative, multi-week attention nationally — plus two disastrous seasons would certainly turn that job security upside down. 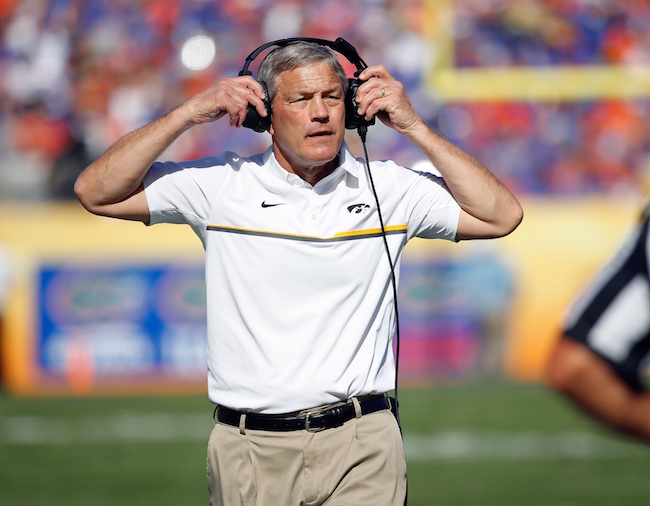 Current A.D. Won’t Fire Them, But Not Quite Grandfathered In

Why — Unlike Chryst and Franklin, the previous B1G Championship coaches have longevity. Ferentz is the longest-tenured B1G coach by a long shot, and Dantonio is entering his 11th season. Both programs withstood other big-time suitors to keep them around.

Let’s be honest. Iowa athletic director Gary Barta isn’t firing Ferentz. Barta gave Ferentz an extension last year — one that would keep him Iowa City through 2025 — to keep him until he retires. And given the structure of his buyout — he would still get 75 percent of his contract if he was fired before 2021 — it isn’t likely that a couple of losing seasons will oust Ferentz. Barta also just signed an extension through 2021. It would take him retiring/leaving and combined with a few rough seasons in a row for Ferentz to get fired before his deal runs out in 2025.

And even after a stunningly bad season, Dantonio might have the same kind of leash. He’s under contract through the 2022 season. Mark Hollis won’t fire Dantonio even if has a couple more clunkers. The guy might already the best coach in program history. The only scenario in which he doesn’t leave East Lansing on his own terms is if Hollis leaves and a new AD wants to make a change after several losing seasons. But don’t count on that happening. 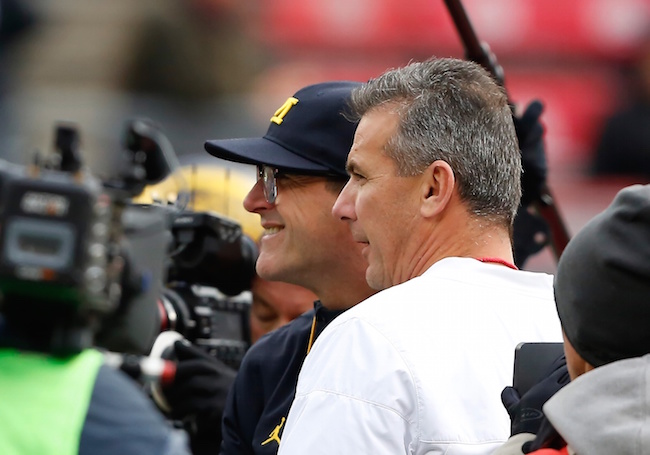 Why — All three of these coaches have had varying levels of success. It might surprise some to think that Fitzgerald could have more job security than Dantonio and as much as Harbaugh or Meyer. But Fitzgerald belongs in that group, and one could argue that he has even MORE security than the other two coaches he’s associated with.

You can point to Fitzgerald’s 10-year contract extension he signed in 2011 as job security. That was actually after back-to-back seasons of decreasing win totals. But there’s also the fact that Fitzgerald is the program’s winningest coach in school history. He also took the program to more bowl games in 11 years (7) than it went to from 1876-2005 (6). Fitzgerald has “Northwestern lifer” written all over him. He inherited a program that was historically awful and he has a fan base that adores him, even when the team wins seven games and loses to Illinois State. His job is safe.

Harbaugh is in a rare spot as a coach entering his third year on the job after a season that fell short of expectations. He’s the closest thing to Bo Schembechler that Michigan could hope for and a couple lackluster seasons wouldn’t change that. Harbaugh has essentially an open invitation to do or say whatever he wants with his athletic director’s blessing. That’s serious security. Even if Warde Manuel stepped down tomorrow, his replacement wouldn’t dare fire a coach of Harbaugh’s caliber. Michigan is as all-in with a coach as any program in the country.

Meyer, like Harbaugh, has an expectation to win a conference title and compete for a national title every year. Say what you want about Meyer’s one B1G Championship, but he’s 61-6 overall and 39-2 in the B1G. Oh, and he has that national title (three if you want to count the Florida days). Win 11-plus games, send a bunch of guys to the NFL draft, recruit a top-five class, rinse and repeat. That’s what every program covets and that’s what Meyer brought back to OSU. Barring something crazy, we’ll never see the day that Meyer is fired in Columbus.