It’s the offseason and once again, the B1G East looks loaded heading into 2017. On top of that, we’re coming off a season in which the East legitimately had three teams vying for a College Football Playoff spot heading into the final weekend of the regular season.

In other words, get ready for it. This offseason — probably at B1G Media Days — the question will surface once again, just like it did last year.

Are there any plans to change up the divisions?

B1G Commissioner Jim Delany will probably have a similar response. He’ll have the same look of frustration on his face, and for good reason. After all the heat he caught for “Legends and Leaders,” the 2014 switch to “East and West” was exactly what those critics wanted.

But now it’s obvious that there are more national contenders in the East than there are in the West, and that’s somehow Delany’s fault. Some believe it’s Delany’s responsibility to make a change based on a three-year sample size.

The truth is, that’s still not enough time to see this thing through. Changing up the divisions now would be premature, and in reality, Delany would be asking for an even bigger headache by doing so. 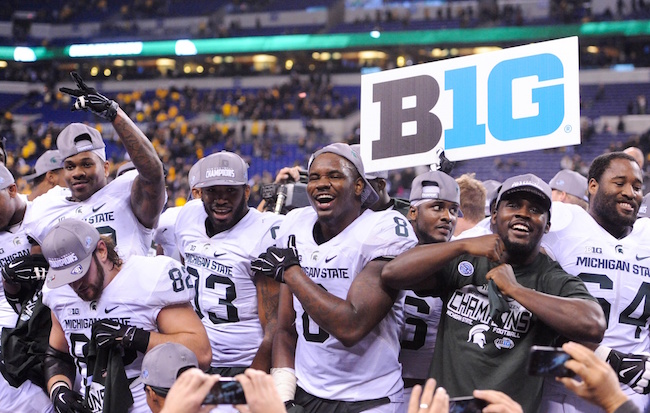 Obviously one could look at the divisions and see that since the 2014 expansion, the East has been the better division. They own all three B1G titles and all three College Football Playoff berths. One could argue that between Mark Dantonio, James Franklin, Jim Harbaugh and Urban Meyer, no division in college football has better coaching.

Those are all valid points.

But let’s not pretend like the West has been a doormat. After all, six West teams finished in the final Associated Press top 25 in the last three years. In that same stretch, eight West teams won at least nine games.

Let’s also not forget that arguably the top two B1G upsets the last two years were Nebraska knocking off Michigan State in 2015 and Iowa stunning Michigan in 2016.

And with the exception of the 2014 B1G Championship, the West was represented well in the title game. We’re coming off of two thrilling B1G Championships that were fair fights to the finish.

Who could forget this?

Both B1G West teams would’ve likely earned playoff berths had they prevailed. That’s a lot more than the SEC can say.

Getting back to those nail-biter B1G Championships, Michigan State is the exact reason that division-shifting can be an impossible task.

At this time a year ago, MSU was part of the unbalanced divisions problem. They were the team that had three straight top-six finishes and by all accounts, looked like a national power for the foreseeable future. As long as Dantonio was in town, it would’ve been easy to assume that wouldn’t change anytime soon.

RELATED: Projecting the B1G’s non-conference schedules from weakest to toughest

In one year, MSU went from the team that dethroned the defending national champs to the team that won half as many games as Maryland. With an offseason from hell, the Spartans are college football’s biggest mystery moving forward.

Penn State looks like the team that took MSU’s place in the East hierarchy, which nobody predicted last year. And while the Lions appear locked and loaded for another run, what happens if they go back to being an seven-win team if and when Joe Moorhead takes a head coaching job?

There are no guarantees in college football. We can act like we know exactly how a team will perform over the next five or six years, but it’s still a guessing game.

Even if we could guess future records accurately, the B1G is actually set up much better for parity now than it was in years past. 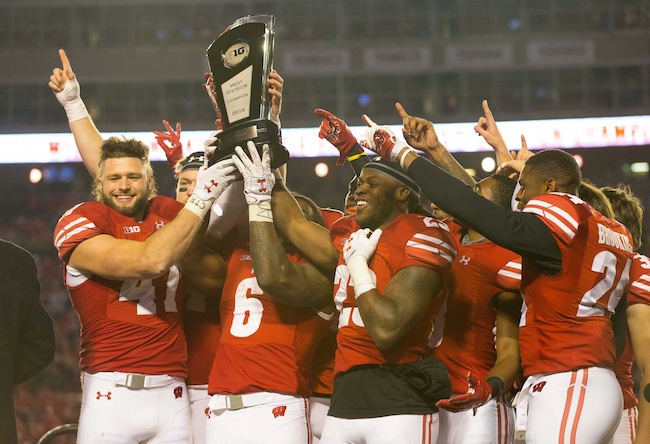 The nine-game conference schedule is why division-shifting is an unnecessary gamble to make in the near future. Three crossover matchups lessens the probability that one B1G team has a significantly tougher schedule than another.

Perhaps more importantly, every West team has at least one matchup with either Michigan, Ohio State or Penn State each of the next three years. There are no more cases like 2015, when Iowa’s two crossover games were against Indiana and Maryland.

That also evens things out for the East, which will see plenty of Illinois and Purdue the next three years:

Throw in a yearly matchup with Rutgers and the East will have its fair share of matchups against the conference’s weakest foes (at least recently).

It can be frustrating if you’re a Rutgers or an Indiana fan knowing that you have three yearly matchups with potential playoff contenders, but those teams also have double the Illinois/Purdue meetings compared to the rest of the East.

Even if you do believe B1G teams are locked into their current standing for the next few years, the nine-game conference schedule has sort of become an equalizer. Nobody is lucking their way into the B1G Championship because of unbalanced divisions under the current model.

RELATED: Maryland will encounter the toughest schedule in the B1G

That won’t happen this year in the B1G. It might not happen for several years. That’s because it’s an imperfect system.

Sure, Legends and Leaders struck a nice competitive balance, but it didn’t take intra-divisional rivalries into account. East and West — many believe — is the inverse of that.

Still, it’s only been three years. That’s not even a full college experience. If the East wins 10 straight B1G Championships and the West fails to put a team in the playoff as a result, a couple tweaks would be understandable.

For now, don’t expect Delany to answer the inevitable division-shifting question any differently.