If you made it through all seven rounds of the draft, congratulations. You’re a trooper. Consider this your reward.

Ok, you deserve more. How about some bragging rights?

Well, the B1G had its best seven-round draft ever. It topped the conference’s previous record of 44 players drafted in 2004 with 47 players picked.

Every B1G team was represented, and none more than Ohio State. The Buckeyes fell short of pulling off the first-round and cumulative draft records some thought they could reach, but they still set a new draft mark with 12 players selected in the first four rounds.

Until things finally wrapped up on Saturday night, there was B1G intrigue. Here were some of the noteworthy B1G elements from an action-packed Day 3:

What a weird draft it was for Cook. There had to have been a dozen different spots in which he thought he would be picked before Saturday.

Instead, he landed with the Oakland Raiders, a team that already has a young franchise quarterback. Derek Carr isn’t losing that job to a rookie, so barring injury, you can all but squash any notion of Cook stepping into a Russell Wilson-like situation. He’ll be holding a clipboard alongside former Penn State quarterback Matt McGloin, who could likely remain the No. 2. Carr showed last season that he could be the franchise quarterback that the Raiders have been searching for since Rich Gannon.

But there is a bright side for Cook.

The NFL is all about opportunity. Most rookies in the NFL need a break to get a chance. That’s Cook’s reality now.

His road to becoming a franchise quarterback is a steep one, but it’s certainly not an impossible one. And if he does get there, he has one of the league’s most talented young wideouts in Amari Cooper. Don’t forget that Cook is the same guy who was an unheralded recruit who had “backup” written all over him out of high school. He knows how to work his way up a depth chart.

Cook will get a chance to do that, just as fellow fourth-round pick Kirk Cousins did. Cousins was stuck behind NFC Offensive Rookie of the Year Robert Griffin III, and he just got $20 million to play football next year.

He offered up some words of encouragement to Cook:

The Raiders traded up 14 spots to get Cook. They know that things happen, and in a quarterback league, you need to have that spot solidified. Just like the case would’ve been if he was drafted in the first round, it’ll be Cook’s job to be ready if and when the opportunity comes.

And besides, why wouldn’t Cook enter the NFL with a chip on his shoulder?

Speaking of overlooked guys, I thought each one of the B1G’s linebackers picked in the fourth round could’ve been picked on Day 2. They almost were.

All-American Joe Schobert was the first pick on Saturday by the Cleveland Browns, who were fired up to pick him at that spot. The Browns need pass-rushers and few guys did it better than Schobert in 2015. Sure, Dave Aranda put him in ideal positions to succeed and he might not have tested as well as other outside linebackers. But go back and watch that Iowa game or frankly, watch any game Schobert played last year. The guy is relentless. He has a nose for the ball that will earn him a spot at the next level.

Joshua Perry was another guy who made a billion tackles in big games. You don’t record 298 tackles at Ohio State without having some next-level ability. They made an interesting comment on the NFL Network broadcast that if this were five years ago, Perry would’ve been a possible first-round pick. Last time I checked, guys who had one tackle broken in an entire season are still valuable in the NFL. He’ll join Joey Bosa in San Diego and provide an immediate impact on a defense that was gashed in 2015.

Then there’s De’Vondre Campbell, who might not have been as decorated as Perry or Schobert, but he’s just as talented. The guy didn’t have a Division I offer out of high school. Minnesota found him at Hutchinson Community College and a few years later, he was one of the B1G’s top linebackers. Campbell has the speed to play linebacker in the NFL. There are questions about his size, but Atlanta desperately needed an edge-rusher, and it got a good one in Campbell. 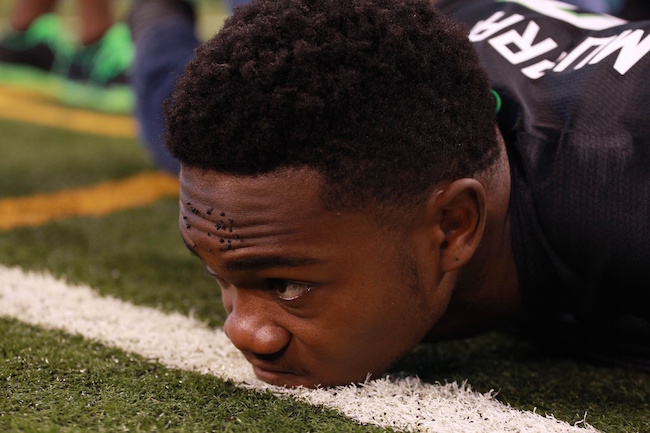 Here’s a quiz for you. Can you name the only schools in the country to have defensive backs drafted in each of the last three years? Alabama and Ohio State probably come to mind, as does Virginia Tech. Maybe you guessed Florida State, too.

What about Minnesota? Well, that’s the fifth team.

Eric Murray was selected in the fourth round, which gave the Gophers their third straight year with an NFL DB. In fact, Minnesota had six players drafted in the top 150 picks in the last two years, which has never happened before. That’s a testament to Jay Sawvel and the development the Gopher coaching staff has done. These aren’t four-star guys the Gophers are turning into NFL players. That’s not an easy thing to do.

Minnesota has been following the Michigan State model by turning unheralded recruits into NFL players. Players like Murray and Briean Boddy-Calhoun — who should’ve been drafted — are only going to help this program land even more talented recruits. But from the look of it, the Gophers don’t need much help recruiting.

B1G QBs off the board

I already wrote about Cook enough, so let’s talk about the other B1G East quarterbacks who came off the board. There were a total of five, four of which were on Saturday.

Cardale Jones was drafted into a nice situation. Most guys don’t get excited about getting drafted by Buffalo — even Jim Kelly didn’t initially want to go there — but Jones finds himself in one of the better situations for a rookie quarterback. I don’t think the Bills are sold on Tyrod Taylor as their franchise quarterback yet, and E.J. Manuel is Jones’ biggest competition for the backup spot.

Jones will get out of his comfort zone and play in a cold-weather climate where you need to have a big arm. With the right development, maybe Jones forms a deadly duo with Sammy Watkins. Jones might be one of the only guys in the NFL who can out-throw him.

RELATED: When and where every B1G player was drafted

Another big-armed B1G signal-caller who has potential is Nate Sudfeld, who was drafted in the sixth round by the Redskins. Sudfeld was actually the most productive quarterback in the B1G last year, and he wasn’t even healthy for the entire season. He’ll have an ideal chance to learn from Cousins, who got franchise-tagged this offseason. It’s never a bad thing to be a backup behind a guy on a one-year deal. If he can develop in a pro-style system, Sudfeld has the intangibles to surprise some people.

And it might’ve surprised some to see Jake Rudock drafted. At this time a year ago, he was a quarterback without a starting job. Credit him for buying into Michigan’s system and working to turn himself into an NFL draft pick. And go figure, he ended up in Detroit alongside center Graham Glasgow. Rudock will be a major recruiting tool for Jim Harbaugh, who made the bold prediction that he would get drafted. Now, he won’t have to travel very far to see him in the NFL. 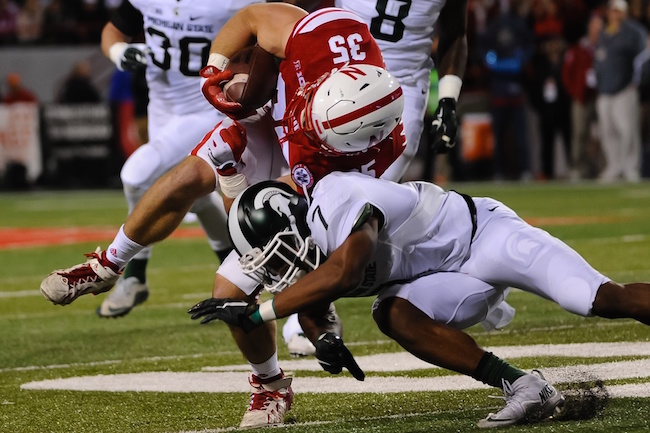 The NFL loves it some B1G FBs

I thought it was a bold prediction to say that Derek Watt and Dan Vitale would both get drafted. Little did I realize that I was selling B1G fullbacks short. They got drafted, but Nebraska’s Andy Janovich — a former walk-on — was the first one to get drafted out of all of them. And go figure, he got a ringing endorsement from John Elway:

I thought it was interesting that the Chargers drafted Watt, who was extremely comfortable with Melvin Gordon. He obviously didn’t have the rookie year many expected him to behind a depleted offensive line. Perhaps Watt can be the guy to maximize his potential. Lord knows it worked in Madison.

All three of these guys can play fullback at the next level, or they can play special teams until they get their shot. Fullbacks rarely get drafted, much less three from one conference. The B1G actually had more fullbacks drafted than running backs.

And who said the fullback was dead?

Why the slide for Aaron Burbridge?

Connor Cook wasn’t the only Spartan who had a surprising free-fall. Aaron Burbridge was on the board for far too long. I thought he could’ve went in the third round, but I didn’t expect to see him drop all the way to the sixth round.

This was the B1G Receiver of the Year, who played in a pro-style offense and comes from a place with a history of producing NFL wideouts. Here are just a few of the guys who went ahead of Burbridge:

I mean, this guy was voted MVP on a team that went to the College Football Playoff. So what if he isn’t 6-3, 220? Did people only watch the film from the Alabama game? Chip Kelly got himself a steal, and a guy who can easily develop into a starting receiver in the NFL.

MSU’s offensive prospects fell way further than anybody imagined. This was supposed to be one of the best drafts ever for the Spartans. Instead, the disrespect shown to Jack Allen, Burbridge and Cook was still there.

There will be some motivated Spartans in the NFL. 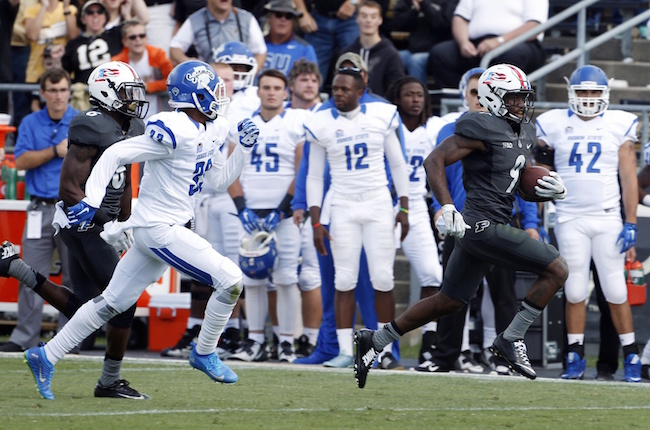 The teams on the two opposite ends of the spectrum in the B1G had a couple of streaks on the line. Purdue had a player drafted in each of the last 18 years while Iowa’s streak went all the way back to 1977.

Fortunately, they both continued.

Purdue’s Anthony Brown, who ran the fastest 40-yard dash of any B1G player, was selected in the sixth round by the Cowboys. With that kind of speed, Brown will have a chance to make a team that has secondary issues. Even in Purdue’s leanest years, that’s an important tradition to continue.

Iowa, the team that went undefeated during the regular season, was the last B1G team without a draft pick. In fact, with only six picks left, the Hawkeyes were in jeopardy of having their 38-year streak snapped.

It’s odd how it works out sometimes that a team that can have as much success as Iowa could lack NFL draft picks. But hey, NFL prospects don’t necessarily guarantee collegiate success.

Blythe’s selection meant that every B1G team had a player picked. No other conference had universal representation in the draft.