You’ll hear that a lot in the days leading up to National Signing Day, but it’s true. Highly-touted recruiting classes don’t always take shape and turn around a program. On the flip side, classes ranked in the middle of bottom of the country can still provide a major impact. We saw that with the B1G West.

With that in mind, here’s a look back at the top recruiting class from every B1G East team:

Why they were the best — Kevin Wilson’s best class was supposed to be the 2013 group, which was the highest-rated in Indiana history at No. 42. But based on performance, it didn’t come close to the 2012 group. In it were arguably the four best offensive players of the Wilson era (Sudfeld, Spriggs, Dan Feeney and Tevin Coleman). There were also underrated veterans like Dimitric Camiel, Ralph Green III and Nick Mangieri in that group. No wonder IU had its first consecutive bowl streak in a quarter century.

Why they were the best — Diggs was the most-hyped recruit in Maryland history, and while he wasn’t the once-in-a-generation player some hoped for, he was still the Terps’ star for three years. Dunn, on the other hand came in as a walk-on and started all four years at three different positions. There were highly-touted recruits like Wes Brown and Abner Logan who didn’t work out, but Maryland still got key production from guys like Sean Davis, Perry Hills and Levern Jacobs. Something tells me DJ Durkin’s 2017 class will top the 2012 class. 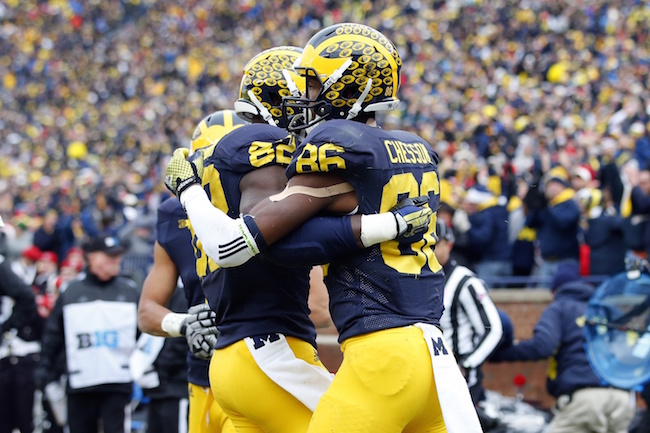 Why they were the best — To be clear, I believe that by this time next year, the 2016 class will own this spot. But Michigan got a ton of value from Brady Hoke’s 2012 class. Kalis, Ben Braden and Erik Magnuson were staples on the offensive line. James Ross, Joe Bolden, Chris Wormley and Henry were all key pieces of Michigan’s defense during the Jim Harbaugh transition. And most of all, the production from the 2012 pass-catchers was tremendous. Jehu Chesson, Amara Darboh and Devin Funchess were all part of that group. Harbaugh will have more talented classes — the 2016 and 2017 classes — but Michigan doesn’t bounce back with consecutive 10-win seasons without the depth of the 2012 group.

Why they were the best — While they weren’t quite as dominant as the 2011 class, there was plenty of key pieces in MSU’s 2012 group. Burbridge morphed into the B1G’s top receiver as a senior, Conklin became an All-American tackle and Riley Bullough was MSU’s best tackler the last two years. Mark Dantonio got production from key 2012 recruits like Demetrious Cox, Josiah Price and Kodi Kieler, as well. They didn’t finish on the note they were hoping for, but the 2012 class was still responsible for a 36-5 mark from 2013-15, which was the Spartans’ best three-year stretch since they joined the B1G.

And they were also contributors for arguably the biggest regular season win in school history:

Why they were the best — Goodness. Where to begin? This group fueled Ohio State’s national championship run as second-year players and many of them left Columbus after three years. Bosa, Eli Apple, Ezekiel Elliott, Jalin Marshall, J.T. Barrett, Gareon Conley, Billy Price and Tyquan Lewis were four-star recruits. Vonn Bell was actually the only five-star in that historic group. Getting a player like Lee to produce like he did was what made that 2013 class special. The 2017 class might come in as the higher-rated group, but it has a long way to go to accomplish what that 2013 group did.

Why they were the best — James Franklin’s first class at Penn State was the reason it surprised everyone and went to the Rose Bowl. Godwin, McSorley and Mike Gesicki were the three key offensive pieces. After his B1G Championship outburst, throw in the inconsistent Saeed Blacknall, too. The defensive additions were just as critical. Third-team All-B1G selections Jason Cabinda and Marcus Allen were in this group along with Grant Haley and Koa Farmer. With the exception of Godwin, this group is all back and capable of doubling down on an incredible 2016 season.

Why they were the best — Perhaps the most buzz ever generated by a Rutgers recruiting class was in 2012, when five-star and New Jersey native Hamilton gave Rutgers his pledge. Had he stayed healthy, he could’ve finished his career as one of the B1G’s best defensive linemen. Still, that class also had the best receiver in school history in Leonte Carroo. There was also the team’s 2016 MVP, Julian Pinnix-Odrick, as well as tackling machine Steve Longa. That group was part of three straight bowl berths and a 23-16 stretch from 2012-14, but Kyle Flood sank his own ship in 2015.