Which B1G fanbase had the most ejections and arrests in 2016?

Eleven Warriors compiled those numbers from every school in the B1G through a Freedom of Information Act request. Well, 10 schools. Northwestern and Penn State are private and don’t have to share that information, Rutgers told Eleven Warriors that it did not track ejections and arrests while Indiana didn’t respond with data.

Still, Eric Seger compiled a whole lot of data on shenanigans caused by B1G fans on game days in 2016.

This table (via Eleven Warriors), documents those arrest/ejection figures: 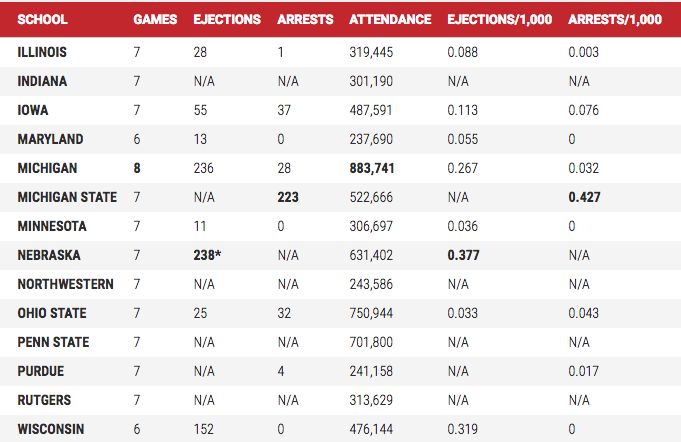 A few things jump out. Of course schools like Nebraska and Michigan ranked high in ejections. When 90,000-108,000 people show up at each game, that’s expected. The ejections per 1,000 people might be a better measure of how rowdy a fanbase is.

Another interesting note was how big of an outlier Michigan State was in the arrests department. Considering the next-closest team to MSU’s 223 arrests was Iowa at 37, that’s saying something.

Did MSU tell the truth and other schools not track that number as closely? We don’t know. We do know MSU told Eleven Warriors that its arrests were compiled over the 24-hour period of a given home game. Other schools might not have taken that into account.

Iowa and Ohio State, which were second and third in arrests, saw increased problems during night games. According to Eleven Warriors, 13 of Iowa’s 37 arrests came during the night kickoff against Iowa State. Ohio State had 12 ejections in the 8 p.m. tilt against Nebraska.

Schools like Maryland, Minnesota and Wisconsin claimed it had no arrests at all in 2016. But according to Eleven Warriors, Wisconsin recorded 142 “field contacts.” They never heard a clear definition on what that was.

To read more about each B1G team’s specific arrests/ejections breakdown, read the entire Eleven Warriors story. It’s worth your time.