This is the year.

After 20 straight drafts without a B1G quarterback in the first round, it’s going to happen in 2016. It has to. 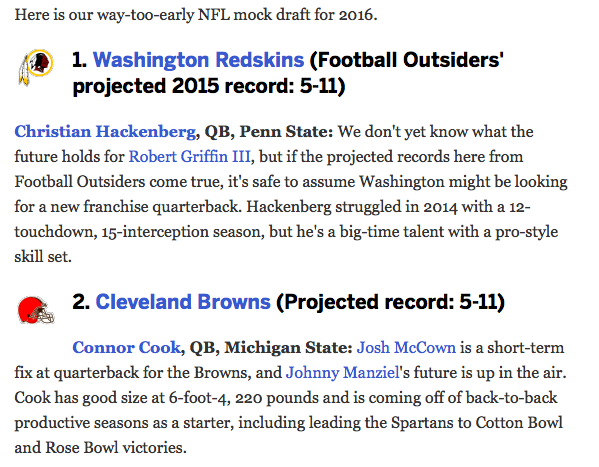 McShay’s No. 1 pick didn’t suffer any major injuries or have any off-the-field issues. McShay’s No. 2 pick earned All-B1G honors and led his team to the College Football Playoff after winning his second B1G Championship. And McShay’s No. 7 pick, the 6-5, 260-pound national-title winning quarterback, finished his career without a loss.

Wait, you mean to tell me that a year later, there’s not a first-round pick somewhere in there?

That’s the way the experts see it. Despite the loaded crop of B1G quarterbacks in this draft, it’s hard to find many people who believe this never-ending streak will end on Thursday. It begs the question worth asking.

If not this year, then when will it ever happen?

That’s extremely hypothetical. It’s still too early to tell, but the B1G’s projected starting quarterbacks in 2016 don’t appear to have a first-rounder in the bunch. I’m not in the business of projecting high school kids as future NFL prospects, either. Projecting guys like Connor Cook, Christian Hackenberg and Cardale Jones is hard enough, and we’ve seen them play in plenty of big games.

For one reason or another, there’s always something that prevents a B1G quarterback from going in the first round. 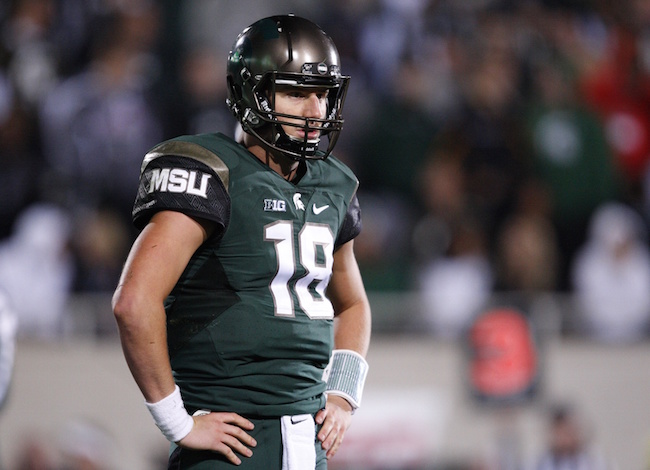 Chalk that up to the run-first NFL days of old.

Ok, what about 2001? Everybody knew that Michael Vick was the prize of the draft. But after that, many felt Drew Brees was the next best quarterback. When Vick went off the board first, surely there should’ve been ONE team that needed a quarterback. Well, Mike Riley’s San Diego Chargers did after Ryan Leaf busted. But because some wondered about Brees’ height — the Chargers started 5-9 Doug Flutie that season — he wasn’t worth trading into the first round to grab. So they patiently waited until the first pick of the second round and got their guy.

You’ll want to watch this old draft tape that looked back on the Chargers’ knockout 1-2 selections (and see Riley with hair):

Brees, of course, is a lock for the Pro Football Hall of Fame. So is Tom Brady, and if he continues to play at this level, so is Russell Wilson. Even Kirk Cousins just got franchise-tagged and looks like he could be a solid starting quarterback in the league for years to come.

But on paper, you can’t ask for a much better scenario for the real streak to end. The top two quarterbacks — Jared Goff and Carson Wentz — are both expected to come off the board in the first two picks. Both of their likely teams traded all the way up to the top of the draft to get them, despite the fact that they aren’t considered once-in-a-decade prospects.

Everybody knows that in today’s NFL, you have to have a franchise quarterback to sustain success. And if you don’t, you need a once-in-a-decade defense like the Denver Broncos had.

Speaking of the Broncos, they HAVE to be in the market for a quarterback, right? You mean to tell me that John Elway is going to be able to sleep at night knowing that Mark Sanchez and former Northwestern great Trevor Siemian are his two best options?

Knowing the way this usually works out for B1G quarterbacks, the Broncos will pull off a trade to get the disgruntled Sam Bradford. The other teams in need of a quarterback will either trade down, wait until the second round or take Paxton Lynch.

I’m prepared for Cook and Hackenberg to go off the board early in the second round and accept the reality that the B1G will still lack a first-round quarterback in the 21st century. We’ll watch at least one 2016 B1G quarterback turn into a Pro Bowler and then look back on him wondering why he wasn’t a first-round pick.

But maybe B1G quarterbacks have been so successful in part because they weren’t first-round picks. Maybe it put a chip on their shoulders. Or maybe it was the fact that they weren’t put into dire situations that forced them to become cornerstones immediately. Cook, Hackenberg and Jones could all use a little time away from the spotlight.

RELATED: Twenty bold predictions for the B1G in the 2016 NFL draft

Even though none of them were invited to the green room, each one of them will be a hot topic of conversation throughout the draft. They are the household names. The average fan has seen them play far more than Goff, Lynch or Wentz. Are B1G quarterbacks victims of over-analyzation? Perhaps, but teams do enough homework on all possible franchise quarterbacks that outweigh any quotes from anonymous scouts.

Still, despite what’s been said about Cook and Hackenberg — Jones’ 2015 benching likely excludes him from first-round consideration — they can make B1G draft history.

Is this the year?