Every year when the schedule is released, I make a mental note of whether or not I think it can be a candidate to host College GameDay.

Several factors go into that. Obviously, having a headliner matchup is crucial. Another is playing at a venue with a passionate fanbase. Having a game already locked into a primetime slot helps, and a primetime slot on ESPN/ABC is even better. Noon games are all but out of the question.

Both teams also have to be relevant. Every non-service academy team that played in a GameDay game in 2015 was ranked in the top 25. In fact, only two unranked teams in the last three years have taken part in ESPN’s pregame show.

There’s also the competition factor. There could be a really solid candidate that would be a host in most weeks, but a potential No. 1 vs. No. 2 matchup is going to take the cake 10 times out of 10.

So with that in mind, here are the B1G games that are most likely to host GameDay (excluding the already-announced LSU-Wisconsin game).

What are the chances? — This game has potential to have major B1G West implications. Both Nebraska and Wisconsin figure to still be in the division race in late October. On top of that, the game already has a primetime slot on one of ESPN’s networks.

But this game has little chance of hosting GameDay. Wisconsin will have already played games against LSU, Michigan State, Michigan, Ohio State and Iowa. If the Badgers are above .500 — much less ranked — it’d be a minor miracle. It would also be dependent on Nebraska being 6-1 or 7-0 coming into Madison. The schedule is favorable but that might be a bit of a reach for a team that won five games in all of 2015.

Even if Wisconsin and Nebraska somehow both found themselves in the top 25 by Week 9, they’re up against stiff competition. Michigan and Michigan State had the game of the year in 2015, which GameDay was there for. On top of that, two potential top-five teams could be facing off. And if that doesn’t happen, the Florida-Georgia game figures to be a more likely destination. Don’t forget that GameDay is already going to Wisconsin for the opener at Lambeau Field.

In other words, don’t hold your breath, Badger fans. 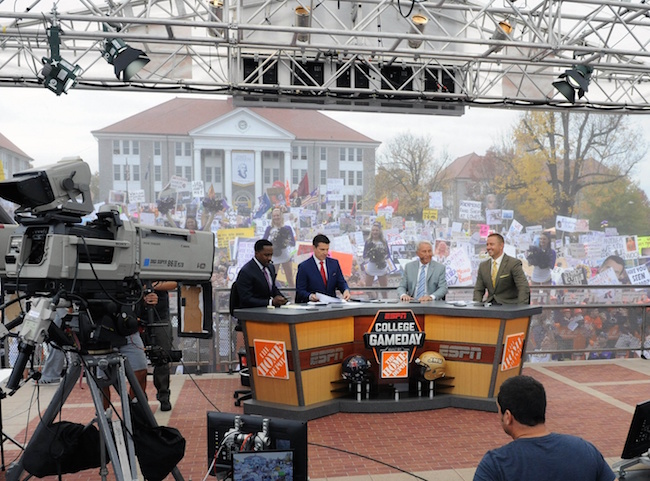 What are the chances? — This is one of the B1G’s top non-conference matchups, and clearly Nebraska’s only chance to host GameDay in 2016. The pregame show actually hasn’t been to Lincoln since 2007. It will surely be a packed house with two of college football’s most popular teams. On top of that, it already has a 3:30 p.m. ET slot on ABC.

Well, there are a few reasons. For starters, the competition is deep. There are four other games that could likely feature ranked teams. Nebraska also likely won’t be ranked by Sept. 17. Even if the Huskers beat Fresno State and Wyoming by 75 points, they still likely won’t crack the top-25 by Week 3. History suggests that when GameDay has a choice of a ranked games — much less three with major College Football Playoff implications — they get the nod. Nebraska’s GameDay-less streak will likely continue.

What are the chances? — Surprised to see the B1G’s biggest rivalry game only at No. 8? You shouldn’t be. GameDay hasn’t hosted it since 2007.

Besides ESPN’s infatuation with the Iron Bowl — GameDay has been to it three times in the last five years — there are a couple of other things preventing it from happening. Because of tradition, the game is almost always a noon kickoff. Those don’t work for GameDay. For that to even begin to be a possibility, it would have to be a 3:30 p.m. ET kickoff.

The odds of GameDay going to “The Game” for the first time in nine years aren’t favorable. 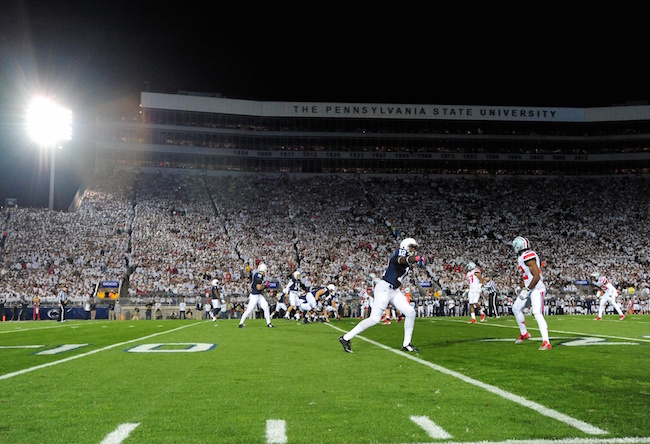 What are the chances? — On paper, this one seems like it would be a good fit for GameDay. It’s a primetime game on an ESPN network in Happy Valley. Outside of Ole Miss vs. LSU, there aren’t a ton of matchups that figure to capture a national audience like an OSU-PSU tilt would.

I wouldn’t be surprised if this happened, but I’m skeptical.

How many times has GameDay been to College Station in the post-Joe Paterno era? None. Part of that has been the Lions’ step back on the field. PSU hasn’t had a win over a ranked team in the James Franklin era, and their blowout losses to top-tier teams certainly don’t help.

The good news for the Lions is that they have home games against Minnesota and Maryland and a bye week leading up to Ohio State. The Lions would have to be 6-1 — a close game in Ann Arbor is required, too — and at least a borderline top-25 team. It wouldn’t hurt if the Buckeyes were undefeated.

If not, PSU’s post-Paterno GameDay drought will continue.

What are the chances? — I’d say it’s a coin flip. In all likelihood, this is a game between two top-15 teams. A renewed rivalry between two nationally relevant teams in primetime? What’s not to like?

For me, nothing. For the powers that be, there might be a few hurdles. The fact that the game is on NBC doesn’t help, but it’s not necessarily the end-all, be-all. The bigger challenge for the MSU-Notre Dame tilt is the competition it’s up against. The Ohio State-Oklahoma game will have a huge audience, as will the Alabama-Ole Miss matchup. Considering Ole Miss has been Alabama’s kryptonite, that might be an attractive host site for GameDay.

MSU and Notre Dame should warrant serious consideration. Those games are always thrillers, no matter how good either team is. Believe it or not, GameDay hasn’t been to South Bend since 2012. The only two chances for that are the MSU game or the Stanford game.

Plus, there’s always the chance of this happening again:

What are the chances? — For all the reasons that the MSU-Notre Dame is a coin flip, so is Ohio State-Oklahoma. A non-ESPN primetime game with two top-15 teams appears likely. So why is it ahead of MSU-Notre Dame? There’s a decent chance that it’ll be a showdown of two top-10 teams. Usually, that’s an automatic qualifier for GameDay. If both teams look strong out of the gate, it’ll be tough for this game not to be picked.

But last time GameDay went to Oxford, it was the epic takedown of Alabama in which Katy Perry broke the internet. A return could be imminent.

What are the chances? — I mean, after last year’s game, how can GameDay not come back for the grudge match? The finish of the year in college football was everything a network could’ve hoped for. It smashed regular season ratings records and proved to be one of the lasting images of 2015.

But ESPN could have a tough call if Clemson and Florida State are both unbeaten entering Week 9. Both teams are likely to be in the preseason top five and could essentially be playing for a College Football Playoff bid. We all know that Lee Corso doesn’t need any excuse to head to Tallahassee.

Still, I think Michigan and Michigan State are both undefeated and in the top 10 heading into this one. If that’s the case, I think UM-MSU gets the edge.

What if this happens again?

What are the chances? — Favorable. I know what you’re thinking. Why would GameDay go to a game where one team is a touchdown favorite? There are four major factors leaving me to believe this will happen.

So yes, I think the crew does make a late-September stop in Ann Arbor. 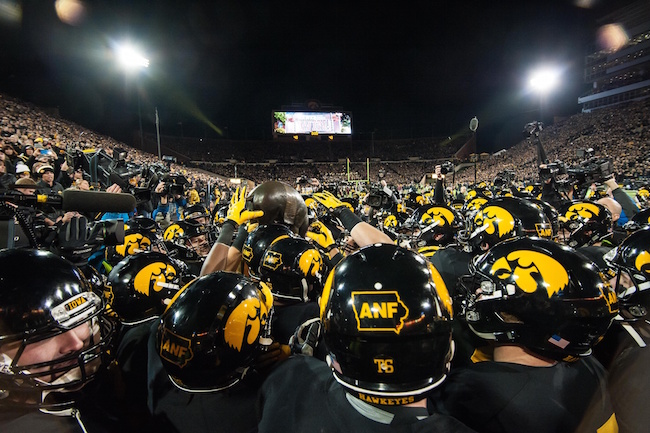 What are the chances? — I know what you’re thinking: Iowa hasn’t hosted GameDay in 10 years. That’s true. But everything else could line up perfectly.

Think about it. Iowa’s toughest pre-Michigan games are vs. Wisconsin and at Penn State. We could definitely be talking about an undefeated Iowa team in mid-November again. The Nov. 12 tilt will mark Michigan’s second time leaving the state. The only other time that’ll happen is when it travels to Rutgers.

If both teams are undefeated, it’s a lock. Even if there’s a loss or two between them, the odds are still favorable.

The game is already penciled in as a primetime showdown on one of ESPN’s networks. That’s a good early sign. Plus, the competition doesn’t appear that strong. There’s no major rivalry game to compete with.

If Michigan and Harbaugh go unbeaten that deep into the season, they’ll be the biggest enemies in college football. Iowa City would be the place to be if that came to fruition. GameDay surely would not be disappointed.

What are the chances? — If there’s one B1G game I’m betting on to host GameDay, it’s OSU-MSU. Three of the last four years, the GameDay crew has been on hand to watch the B1G’s best battle it out. I’ll go out on a limb and say that they make it four out of five years.

Last year’s slugfest was an instant classic. It seems like every game with these teams is down to the wire. If both are unbeaten in the B1G, it’s a guarantee. Even if they both have one loss apiece, I still think GameDay still gets to East Lansing. There isn’t much competition with the SEC basically taking a week off to play FCS teams.

But hey, who am I to judge?