It isn’t all or nothing. Sometimes, however, it appears that way.

Here are the Week 5 B1G Grades:

Here’s the good. Illinois went into No. 15 Nebraska and had a fourth-quarter lead. That was because of some stellar defensive line play. Illinois ultimately wore down with the Huskers’ long second-half drives and ultimately couldn’t get the ball back. Still, it was progress after the Western Michigan debacle.

Indiana beat a ranked team at home? Seriously? The Hoosiers took down Michigan State thanks to some solid second-half defense and some timely offense down the stretch. Griffin Oakes got the hero moment, but Indiana is blown out if not for its dominance on third down. Holding the MSU offense to just 4-of-15 conversions in those spots pushed IU over the top after a mistake-filled start.

Who saw this one coming? For the third straight week, Iowa played down to its competition. Losing at home to Northwestern is one thing. Allowing 38 points to that offense is more embarrassing than losing to North Dakota State. The Hawkeyes have zero consistency on either side of the ball. Desmond King’s special teams dominance overshadowed another lackluster offensive effort from a group with all sorts of problems near the midway point of the season.

Sure, it was Purdue, but what are good teams supposed to do against bad ones? Win 50-7. The Terps dominated the line of scrimmage with 400 rushing yards. Usually a 400-10 rushing advantage results in a massive win. Want a not-so-bold prediction? Ty Johnson and Lorenzo Harrison are going to fuel this offense to more victories this season.

The Wolverines beat their first top-10 team in eight years. They looked like they had the best defense in America. They might have the best defensive back in America, too. So why not an ‘A’? Against Wisconsin’s dominant defense, the offense still showed weaknesses. Wilton Speight still has to make better decisions and the ground game has to get going against better defenses. Missing three kicks isn’t good, either. If the Wolverines are going to live up to that No. 4 ranking, there are areas to clean up.

Michigan State failed its first road B1G test. Let’s not put lipstick on a pig and pretend the Spartans just got unlucky. Nine days ago, this was a top-10 team. The Spartans were a mess down the stretch and fell to a team that hadn’t beat a ranked opponent at home in 10 years. The penalties, the sacks allowed and the defensive lapses were all killers for MSU. It doesn’t matter if you out-gain a team and proceed to do shoot yourself in the foot like the Spartans did. 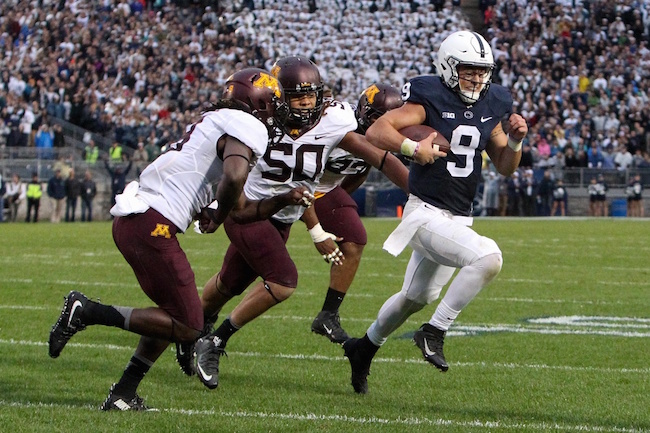 There was a lot to like for the Gophers. They jumped out to a double-digit lead on the road in front of 95,000 fans. They racked up nearly 500 yards of offense and put themselves in position to get a nice victory. Where did it go wrong? Minnesota had a few too many lapses. The breakdown in coverage on the 80-yard Irvin Charles touchdown was bad, as was the cheap shot on Joey Julius. It was sort of fitting that the Gophers lost on a walk-off touchdown run on the first play of overtime. It didn’t take much to lose a game that Minnesota should’ve won.

That wasn’t an ugly win, but it was far from a sexy win, either. Nebraska went throwback and pounded the rock right at Illinois. The go-ahead scoring drive was the Huskers’ longest in 16 years. It covered up a slightly below average afternoon. Nebraska finally lost the turnover battle, which was the reason Illinois was leading in the first place. But Terrell Newby got rolling behind some solid offensive line play down the stretch and prevented a meltdown at home.

Remember when this team couldn’t score against an FCS team at home? Now the Cats are putting up 38 points against the defending division champs. That was thanks in large part to Austin Carr, who recorded a career-high three touchdowns. If not for some poor special teams coverage, the Cats would’ve won that game by two touchdowns easily. It was one of the better all-around efforts we’ve seen from any B1G team in the first two weeks of conference play. 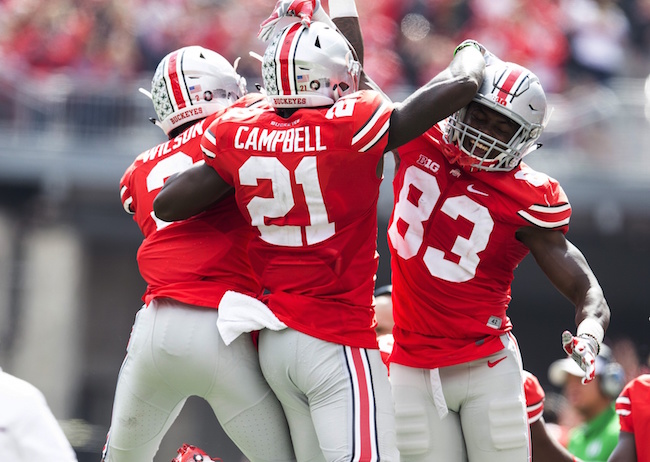 Speaking of impressive, goodness gracious that was a lopsided affair in Columbus. Everyone knew Rutgers would struggle, especially without Janarion Grant. But what the Ohio State defense did to the Scarlet Knights was almost unfair. After the fourth play of the game, Rutgers completed one pass for two yards. On the other side of the ball. J.T. Barrett set Ohio State’s passing touchdowns record, Mike Weber was the B1G Freshman of the Week and Curtis Samuel boosted his rising Heisman case. It felt like OSU was playing an FCS squad.

The matchup didn’t set up as well as some might’ve thought. Down all three starting linebackers, PSU was extremely vulnerable in the ground game, especially against Minnesota’s talented backs. The Lions bent, but they didn’t break. That allowed for Trace McSorley to lead a second-half rally and ultimately, a victory. That was a game that the Lions were desperate to win. You saw that in the post-game celebration. With Saquon Barkley bottled up for most of the game, he and the Lions found a way.

Remember how Purdue was supposedly building this team on an experienced offensive line? Well, the Boilers were out-rushed 400-10. By Maryland. Sure, the Terps are improved, but that says a lot about where this program is at heading into the heart of the B1G slate.

Here’s how bad Saturday was for the Scarlet Knights. They didn’t even turn the ball over and they still lost by 58 points. Completing one pass for two yards in the final 58 minutes wasn’t good, either. Ohio State is the cream of the crop in college football, but that was an overwhelming beatdown.

How does a team score seven points, throw three interceptions, lose and still wind up with a B+? By pushing yet another top-10 to the brink away from home. The Badger defense stepped up again and did so without captain Vince Biegel. That was a team averaging 52 points per game that Wisconsin held to just 14. Offensively, it’s hard to fault Wisconsin too much for struggling against arguably the best defense in college football. Still, the Badgers showed the nation that the LSU and Michigan State victories were no fluke.