There are probably a lot of people wishing that they could fast forward to September and get to the start of the 2016 season.

I can’t blame you for that. Four more months without football does sound daunting.

But if there’s a day to get excited for, it isn’t opening weekend. Sure, LSU and Wisconsin should be a fun one, and Chris Ash’s debut at Washington could be one of the better Power Five matchups of Week 1.

Still, that doesn’t compare to what the B1G has on tap in Week 3. The news that Michigan State and Notre Dame will play under the lights in South Bend, Ind. on Sept. 17 made me realize something. Week 3 will be the B1G’s most important non-conference, regular-season weekend in a very long time.

If you don’t have the B1G’s Week 3 lineup memorized yet, need not worry:

Let’s start with the headliners. Matchups against two college football blue bloods (Notre Dame and Oklahoma) and one against a modern power (Oregon) will generate plenty of hype.

Every one of those games could host College GameDay. I expect Oregon/Nebraska and OSU/Oklahoma both to be played at night. Outside of Alabama/Ole Miss, no other games will draw the audiences of those three.

Nebraska is going to have its usual sellout, with a few extra special visitors on hand from the West Coast. Mike Riley has been building the Calibraska pipeline. You know what would open up that pipeline even more? Beating Oregon — widely viewed as the most dominant western power — and doing so in front of a national audience would be quite the sell to any recruit visiting Lincoln. 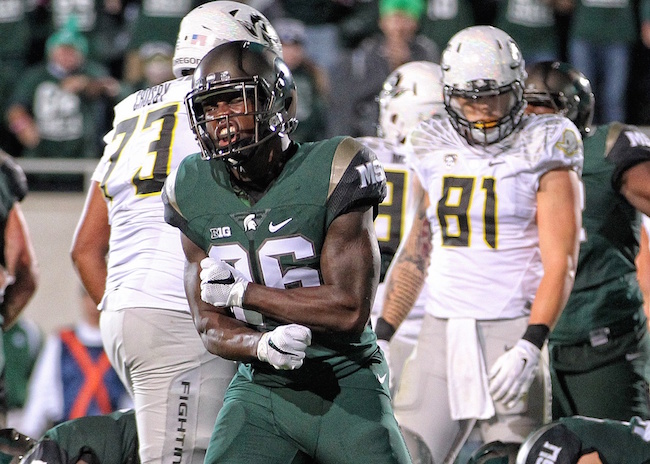 Nebraska might not be considered a College Football Playoff candidate, but Michigan State and Ohio State certainly are. MSU withstood a conference loss and made the final four because it had that Oregon win. OSU didn’t have that headliner non-conference victory to fall back on, and it was left out with one loss to one really good team.

With how good the B1G East is supposed to be this year, both MSU and OSU could suffer a conference loss and still make the field. But that only puts them in the discussion if they take care of business in Week 3. A top-10 road win is the best possible feather in the cap for a borderline team.

But Week 3 isn’t just about the B1G’s headliners. There are people that will pick a B1G team or two to lose one of those “tricky, better-not-lose-them” games. Athlon Sports already came out with a ranking of “best FBS vs. FCS matchups” that had Iowa at No. 1 for its showdown against FCS national champion North Dakota State.

RELATED: Non-conference games that B1G teams should add to their future schedules

Rutgers, Illinois, Northwestern and Penn State all will host bowl teams. First-year coaches Chris Ash and Lovie Smith have to avoid losing home games to non-Power Five teams. James Franklin cannot afford to lose back-to-back years to Temple, which Penn State hadn’t lost to since 1941. And D.J. Durkin doesn’t want to rap up his first non-conference slate with a loss to the only FBS team that didn’t win a game in 2015.

Whether or not they admit it, nearly every B1G team in action has something significant at stake in Week 3.

I hate forecasting schedules four months in advance because there’s obviously a lot that can happen in that time. But if you can go back and find a more important week for the B1G in non-conference play, I’d be surprised.

There are still national pundits that will be holding on to the belief that the B1G fell short of expectations in last year’s bowl season. In the College Football Playoff era, conference strength matters more now than ever. The SEC was rewarded by the selection committee last year because for the most part, its teams dominated headliner non-conference games. The B1G has a chance to do that on Sept. 17.