B1G backfields welcomed several fresh faces last year. It was a bit of a youth movement, but the numbers reflect anything but inexperience.

Five of the top 10 ball-carriers in the conference last fall were either freshmen or sophomores. Only three of those top backs won’t be returning to the field in 2016.

The future of the ground attack in the B1G is bright.

There are a handful of running backs who could lead the conference in rushing at the end of the season. Several of those candidates will just be entering their sophomore campaign. A few seasoned veterans will be in the mix, too.

Regardless of class, the conference is littered with exceptional talent in the backfield. A number of guys could surface on the national radar this year.

Here are the five candidates who are most likely to lead the conference in rushing.

A well-balanced back who displayed a solid combination of power and speed, Jones has the tools to be Purdue’s first 1,000-yard rusher since Kory Sheets in 2008.

Jones carried the ball 168 times for 875 yards and 10 TDs in 2015 as a true freshman. His best performance came against Michigan State in East Lansing, pounding the Spartans defense for 157 yards and a pair of touchdowns while averaging 7.1 yards per carry.

Darrell Hazell already made it clear that the sophomore is going to be the offensive anchor for the Boilermakers this fall. The increased workload could lead to a breakout season for Jones.

To put it simply, Scott was a bruiser last year. What he lacked in speed he compensated for in strength and power.

He totaled 699 yards and 11 touchdowns as a freshman and was an excellent go-to back in short yardage situations. Of his 14 carries on third-and-short situations last year, Scott moved the chains 10 times and scored three TDs.

Even as a freshman Scott was one of the most difficult backs to bring to the turf. Defenders might have an even tougher time wrapping him up in 2016.

Scott is expected to weigh in around 225 pounds this season, 13 pounds lighter than a year ago. If that decrease translates to quicker feet, the sophomore could be one of the most versatile backs in the country.

Clement was a highly-regarded Heisman candidate heading into the 2015 season. As a sophomore, he rushed for 949 yards and nine TDs in backup work behind NCAA-leading rusher Melvin Gordon.

Injuries and discipline issues halted Clement’s Heisman push before it got started last year, though.  Despite limited action as a junior, expectations haven’t changed for the Badger ball-carrier.

Clement has great speed and has the ability to turn a small hole into a 50-yard run. When he reaches the open field, he’s impossible to catch.

His elusiveness and quickness makes up for his lack of power. Playing in an offense that has dominated the ground for the past decade makes Clement a perfect candidate to lead the B1G in rushing in his senior season. 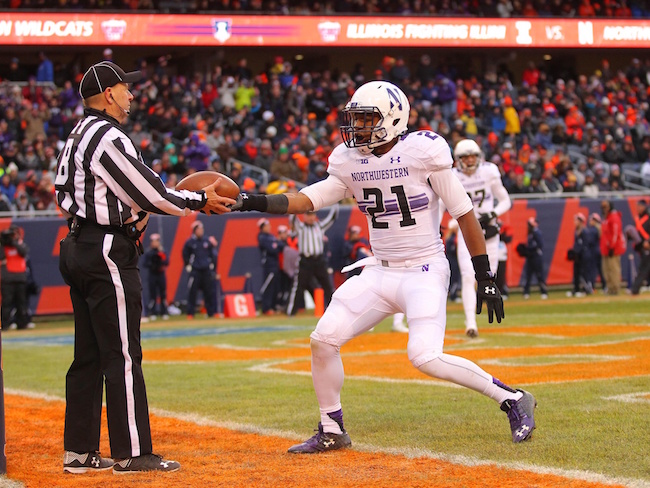 Patient and consistent might be the best two words to describe the junior from Northwestern. He doesn’t have blazing speed nor does he impress you with overwhelming power. Still, Jackson gets the job done.

He’s been a workhorse for Pat Fitzgerald’s offense, toting the ball 557 times for 2,605 yards and 15 TDs in his first two seasons in Evanston. Last year, he was the B1G’s second-best runner behind only Ezekiel Elliott.

RELATED: Justin Jackson might not be a superhero, but he’s worthy of national attention

What makes Jackson so talented is his field vision and crafty footwork. He has an innate ability to make guys miss and always finds a hole in the defense.

Even when teams knew Jackson would be the focal point of the offense, he was tough to stop. Eight times in his sophomore season he eclipsed the 100-yard mark, including a 186-yard performance against Penn State.

With such great vision, Jackson could see himself as the top rusher in the conference by season’s end.

Barkley burst onto the scene last fall as the B1G’s only freshman back to reach the 1,000-yard mark in 2015. He finished the season with 1,076 yards, seven TDs and a 5.9 yards per carry average.

Expectations for a sensational sophomore season have only increased this offseason.

The 5-foot-11, 223-pound back received plenty of praise during winter and spring workouts for showcasing unbelievable strength and improved foot speed.

He dominated in games against Rutgers and Ohio State in 2015. Barkley ran for 195 yards and two TDs in the win over the Scarlet Knights and tallied 194 yards against the Buckeyes.

Those types of performances will be more common in 2016.

Barkley has a combination of athleticism, power and speed that not many running backs in the B1G possess. He has the ability to bounce off defenders, power through tacklers or pass by them in a foot race.

With a year of experience under his belt, another offseason in the weight room and a new offense that will cater to his abilities, the sky is the limit for the Penn State back this fall.

Dustin Schutte
Dustin grew up in the heart of Big Ten country and has been in sports media since 2010. He has been covering Big Ten football since 2014. You can follow him on Twitter: @SchutteCFB
RECENT ARTICLES
BIG TEN
NFL Draft: Which B1G first-rounder will have the best rookie season?
BIG TEN
Purdue's George Karlaftis first B1G player off the board, 4 Buckeyes projected as first-round picks in way-too-early mock draft from CBS Sports
BIG TEN
How the B1G 2022 recruiting rankings look at the beginning of May
BIG TEN
Latest odds released for 2022 college football national champion