Recruiting is a national business. That’s not news.

Every Power Five team — no matter where they are — has to have connections in the recruiting hotbeds. That means plucking recruits from California, Florida and Texas. Few are able to sustain success without having some sort of pipeline in those three areas.

Even Mark Dantonio, who built Michigan State into a national power with a foundation of three-star recruits from Michigan and Ohio, knows the importance of that. That’s why he said he would consider hosting spring break practices in Florida or Texas.

The B1G is broadening its recruiting borders to the nation’s hotbeds, and the numbers prove it.

Here’s every B1G school’s top out-of-state recruiting pipeline and how many recruits they signed from that area (2015-17):

By looking at that, there are a few things worth noting. First is the Florida dominance. Half of the B1G goes to Florida more than any other state. That’s not surprising considering no state produces more talent than Florida does.

The B1G’s only three 2016 road games against non-Power Five teams are all in the state of Florida. Coincidence? No way.

Of the schools that didn’t get most of their out-of-state recruits from Florida, only Minnesota, Nebraska and Northwestern went to non-border states. That isn’t much of a surprise considering Minnesota’s desire to go near-and-far for recruits and Mike Riley’s “Calibraska” movement. 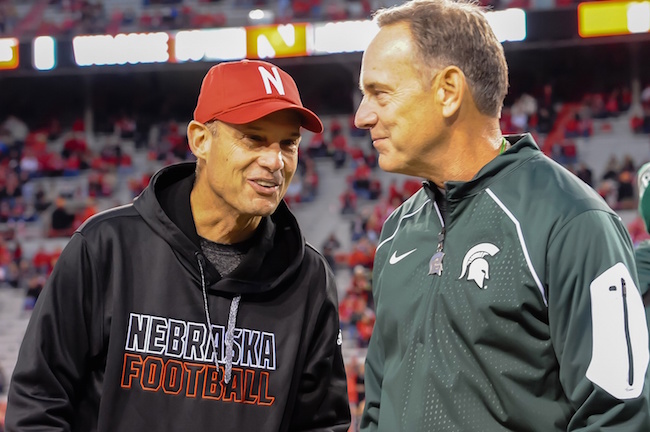 You probably would’ve assumed that the Wolverines went to New Jersey more than any other state. Surprisingly, that wasn’t the case from 2015-17. If you were to include 2014, then New Jersey would’ve had 11 commits and Florida would’ve had 12 commits. But considering Michigan got its top two recruits in program history from the Garden State, New Jersey has clearly been just valuable of a pipeline as Florida.

All three of the five-star recruits that came from B1G hotbeds in the last three years were 2017 recruits, which means that those three teams have improved their presence in their respective go-to markets.

The B1G has eight out-of-state top 100 recruits in 2017. That’s with signing day nine months away. Compare that total to the past 10 years:

That’s an average of 7.6 out-of-state top-100 recruits per year. In other words, the B1G already passed its 10-year average for 2017. Keep in mind that there are still 63 uncommitted top-100 recruits in the 2017 class, many of whom have B1G schools as finalists.

You’ll notice that the two largest totals in that category were in 2013 and 2016. Those were the first full recruiting cycles for Urban Meyer and Jim Harbaugh, respectively. Of the 26 total out-of-state recruits in those two years, 22 of them came from either Michigan or Ohio State.

RELATED: Urban Meyer might have his best recruiting tool yet

But in 2017, Iowa, Maryland, Michigan and Ohio State already have commitments from five-star, out-of-state recruits.

And remember how Texas was once considered the toughest hotbed market to break into for an out-of-state team (that’s now Louisiana)? Of the top 100 recruits in the state of Texas, six are committed to B1G schools in 2017. The B1G set a personal-best of seven top-100 Texas recruits in 2015, which topped the previous high of four.

Eno Benjamin, a four-star 2017 running back committed to Iowa, provided a reason for why that might be happening:

I swear every Texas recruit I know is leaving Texas to go ball somewhere else ? #Migration

which I feel is mainly b/c Texas schools think they have an up on recruits in TX while other states are working hard to get those players..

So what’s the significance of all of this?

The B1G is expanding its borders, and not just in the cable-TV market. Perhaps the expansion of the conference’s national television games helped. Maybe it can be credited to better, more recognizable coaches who recruit kids from hotbed areas harder than the local schools.

Ok, I’ll spare you any more talk on that subject.

If you don’t think the B1G is making strides in recruiting, consider this. Nine B1G teams are in the top 27 in the 2017 recruiting class rankings. In the top 27, the ACC and SEC have five teams apiece, the Big 12 has four and the Pac-12 has one.

It’s early, and those rankings will likely see a significant shakeup, but that’s a strong early statement from the B1G. The conference is tapping into the country’s recruiting hotbeds now more than ever.

No wonder the South so desperate to close off its borders.