CHICAGO — Monday began the unofficial start of the 2016 season for B1G football.

B1G Media Day in Chicago produced no shortage of storylines. From talk of rivalries, raps and guarantees, there were plenty of topics to discuss on the first day in Chicago.

Here were some of the best topics of discussion

There was a consensus feeling from B1G coaches who took the podium on Monday. The tragic deaths of Nebraska punter Sam Foltz and former Michigan State punter Mike Sadler shook the entire B1G community.

See what they said here:

Chris Ash and D.J. Durkin were likened to each other often during the offseason. Both of them came from powerhouse programs where they were defensive coordinators and they both took over non-bowl B1G East teams.

Durkin surrounded himself with recently-fired head coaches across the board. Chris Ash, on the other hand, never even considered doing such a thing.

“I don’t want yes-men in our program. I want guys that have thoughts and ideas that help me learn and grow also,” Ash said at B1G Media Day. “But I do want them to do things a certain way. I feel when you hire younger guys, energetic guys that aren’t set in their ways, it’s easier to get that alignment than it is to hire older, experienced guys, especially head coaches.”

Just in case you thought that Northwestern’s marketing pitch of All-American linebacker Anthony Walker was going away, it isn’t. In fact, we found out on Monday that it could be just beginning.

Pat Fitzgerald was asked about the origins of it. He talked about how the marketing staff did a similar thing with Dan Persa years ago, and that it shows the staff’s ability to “think outside of the box.”

“Let’s have some fun with it,” Fitzgerald said.

Walker played the humble card when asked about it. As it turns out, his teammates gave him the nickname of “The Franchise.” One of his teammates, Justin Jackson, was asked if Walker could tackle him. 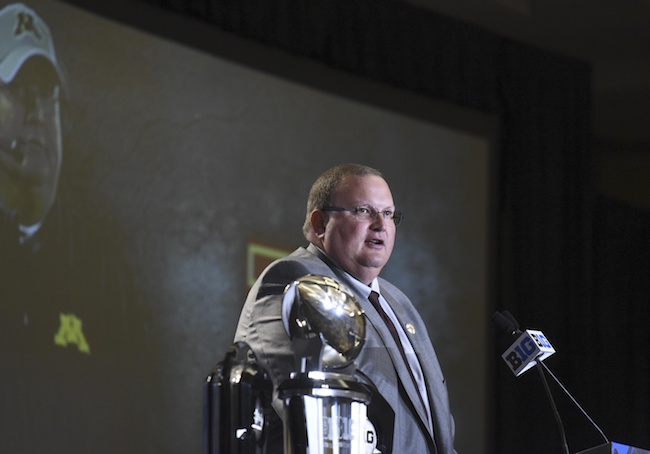 A recent hot topic of discussion in college football is the possibility of kickoffs being eliminated. It’s been discussed at the administrative level, and the Ivy League is already experimenting by moving the kickoff to the 40-yard line. Kickoffs have been a part of 23.4 percent of concussions during games despite representing only 5.8 percent of plays.

There are many who would fight eliminating the play in college football. Minnesota coach Tracy Claeys isn’t one of those people.

He thinks there’s a different way to solve the potential problem.

“If that play is causing that many injuries, and it’s that obvious from the data, then we need to replace it,” Claeys said. “Find a good way to replace it and get it out of the game. I think the player’s safety is the No. 1 priority.

“My own thing that I’d like to see is rather than the double teams and stuff like that, I would like to see first where it’s all man-blocking so we don’t have the two-on-one blocking at full-speed.”

But there are a lot of freaks in college football. What makes Barkley different than the rest?

“He’s a once-in-a-ten-year player,” Gaia said. “It doesn’t just roll in every other year like that. That kid is his own worst critic. He’s always competing. When he sees me hit 555 on squat, he’s going to go put 565 on squat and try to go after it.

“It doesn’t matter who you are or how big you are. He’s going to go after you.”

RELATED: The five things Saquon Barkley can do to become legitimate Heisman candidate

Gaia is right. Barkley did have a video go viral that showed him power-cleaning a whopping 390 pounds.

On the field, the sophomore has sky-high national expectations after breaking the Penn State freshman record for rushing yards in a season. Gaia is looking forward to getting back on the field and blocking for the explosive tailback.

“It makes our job easier, just knowing that if you hold that block for just a second longer, it can be an 80-yard touchdown,” Gaia said. “Having someone back there that at any moment can take the ball all the way is amazing.”

Jim Harbaugh went on and on about how many different positions Jabrill Peppers could play. He said that he could be an option quarterback, he could be the team’s best slot receiver and that he could even challenge for the starting tailback job.

But Peppers isn’t the only one with a multi-position versatility.

“I’m going to put this out there right now, I want to play offense, receiver,” Lewis said . “I love having the ball in my hands, I love being out there trying to make plays.”

Lewis compared himself to a version of Antonio Brown, saying that he could handle himself running routes. The 5-10 defensive back has been sharing a few videos of himself throwing down highlight-reel dunks this offseason.

Butt also talked about playing on the other side of the ball. He apparently “messed around” playing linebacker against De’Veon Smith this summer and did pretty well.

Should we get ready for some unique personnel packages from the Wolverines this year? If we’ve learned anything, it’s that one should never count Harbaugh out of doing anything.