Mel Kiper Jr. had just over two weeks to break down tape of his top 2017 offensive prospects. In other words, take his early rankings for what they are.

In total, Kiper had 15 B1G players among his top offensive prospects. The only position group that didn’t have B1G representation were receiver and tackle.

At quarterback, both C.J. Beathard and Mitch Leidner were among the top seniors while J.T. Barrett was one of Kiper’s top underclassmen. Leidner was a bit of a surprise on Todd McShay’s way-too-early mock draft as a first-round pick. But as you can tell, he isn’t the only one high on the Minnesota signal-caller: 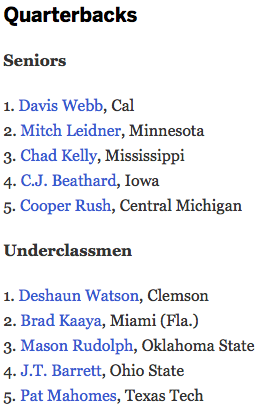 At running back, the guy many expected to compete for the B1G rushing title in 2015 was listed. Corey Clement is one of the more popular bounce-back candidates, so it isn’t much of a surprise to see him among Kiper’s top senior running backs: 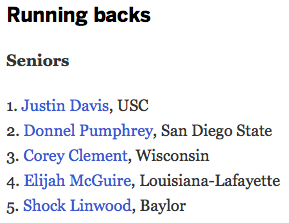 The B1G, as you’ll recall, had a whopping three (!) fullbacks drafted this year. Despite all of that talent gone, Kiper has two more B1G fullbacks among his best prospects at the position: 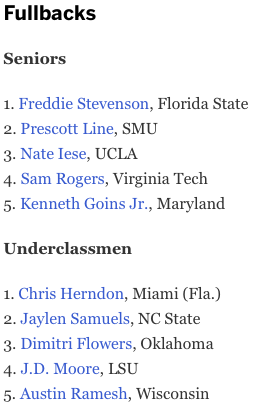 Had Michigan tight end Jake Butt entered the draft this year, he likely would’ve been one of the first tight ends off the board. But the likely preseason All-American is back for his senior year, and considered the top senior prospect by Kiper. Brandon Lingen and Troy Fumagalli, both among Kiper’s top underclassmen, are expected to have expanded roles in their respective offenses in 2016: 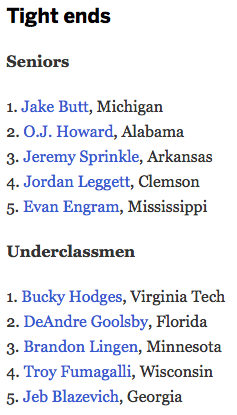 At guard, Kiper actually had two B1G players atop his lists, both of whom are actually expected to play center this season. Pat Elflein and Brian Allen could both be preseason All-Americans, but Kiper has them pegged as guards at the next level. Returning All-American Dan Feeney and returning OSU starter Billy Price also cracked the list: 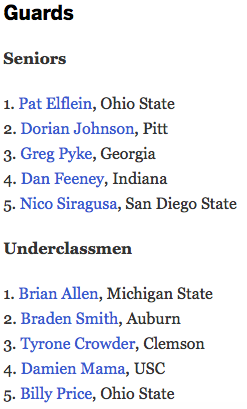 And speaking of guys switching to center, Mason Cole is also making the offseason move. But Kiper had him tabbed as a center instead of a tackle, which could be because Cole is still and underclassman and he could get multiple years at the position if he stays in school. And Dan Voltz, who is coming off a torn anterior cruciate ligament, is expected to move to guard. Nonetheless, Kiper put him as a center: 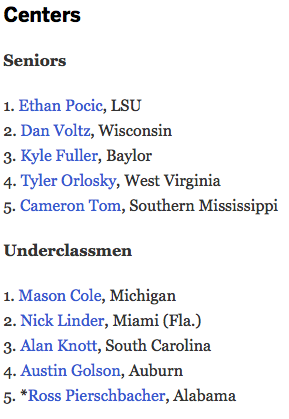