We didn’t need the release of the College Football Playoff poll to show us what we already knew.

The B1G is really, really good this year.

Not surprisingly, the first College Football Playoff poll was loaded with B1G teams in the top 10. Michigan, Ohio State, Wisconsin and Nebraska are all theoretically still alive in the playoff hunt, though that number will decrease by one on Saturday (we’ll get to that later this week).

Oh wait, I almost forgot that Penn State was at No. 12?!?!? Remember when the Lions were 2-2 and couldn’t stay on the field with Michigan? My how things have changed in a couple weeks.

Two, maybe even three candidates from the B1G East, and two from the B1G West show that there’s balance in the B1G. That wasn’t supposed to be the case this year.

The B1G was supposed to be one of the Power Five conferences left out of the playoff picture. Even after Week 2, several bowl projections had the B1G missing out on the playoff for the first time.

But with a month to play, the B1G might already have its ticket punched for a third straight year. 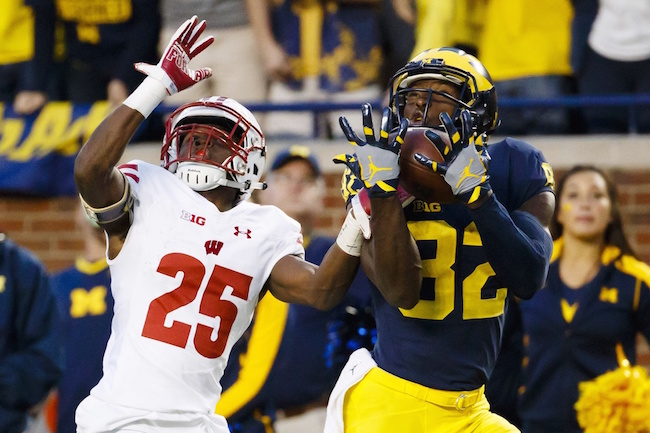 Save your “anything can happen” arguments. We know that. That’s why these rankings aren’t set in stone. But based on what we know from the first nine weeks of the season, it’d be awfully hard for the B1G to mess this up.

Without predicting each game, there are a couple hypothetical scenarios in which the B1G misses out on the College Football Playoff.  If any team other than the B1G’s top four teams wins the conference championship, that could become an issue.

Penn State and Minnesota are the two teams that could play spoiler. The Lions, with their remaining schedule and two wins vs. a top-25 team, would still need some chaos to make the field. Penn State can get into the title game by winning out and having Michigan lose to Iowa and Ohio State. The Lions would have the tiebreaker over OSU and would get to the title game.

But OSU could still make the field as a one-loss, non-conference champ over Penn State because of its résumé.

If OSU & PSU win out, & Wisc plays PSU in B1G Champ, OSU is in the CFP. Far better resume than PSU, & win at Wisc. I stand by my statement.

The Gophers, with upcoming games against Nebraska, Northwestern and Wisconsin, could sneak into the B1G Championship by winning out. Minnesota has too big of a mountain to climb to reach the final four, but it could stop the rest of the conference from doing so. It would take three wins vs. top 10 teams. Minnesota hasn’t beat one top-10 team in 16 years, much less three. Consider that unlikely for a team that needed a game-winning field goal to beat Rutgers at home.

A three-loss Wisconsin team or a two-loss Nebraska team winning the B1G Championship would also be bad news.

But the odds of any of those scenarios aren’t good. The odds are actually better for the B1G to have two teams in the playoff than zero.

How? Well, consider this. It’s boring, but let’s say chalk happens. The favored teams win every game for the rest of the season.

RELATED: Wisconsin held on to playoff dreams, but Nebraska should’ve too

Even though it looks like a coin flip, Ohio State is currently favored against Michigan. So let’s say the Buckeyes win the finale and win the B1G Championship. The Wolverines, with one loss in Columbus, would be in good position to get in as a non-conference champ. Michigan does have three wins against teams in the current top 25, including one vs. the top 10.

If chalk played out in the B1G, Michigan would still need Clemson or Washington to lose a game to steal another Power Five conference’s bid. There would be a potential debate about one-loss teams like Michigan, Louisville and Clemson/Washington, but the Wolverines would certainly be in the discussion to sneak in.

Michigan has every right to think it’ll go into Columbus and win. If that happens and Michigan goes into the conference title game undefeated, the playoff spot might already be locked up, especially if the Wolverines were to face either Wisconsin or Nebraska in the title game. 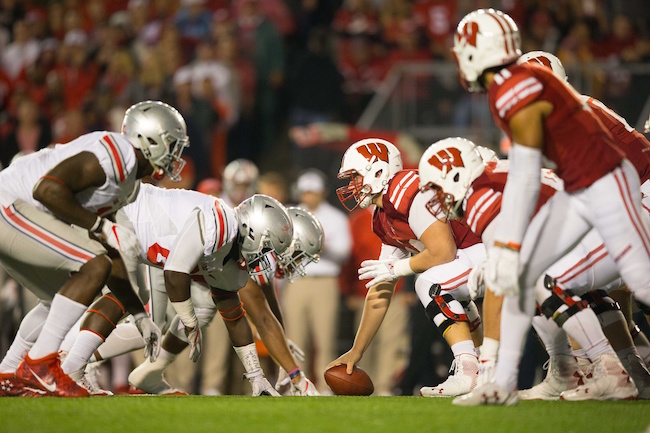 Michigan and Ohio State potentially playing as one-loss/unbeatens would be a huge part of the B1G’s saved playoff spot. But the rise of two West contenders is equally responsible for why the B1G might already have a spot in the final four.

Michigan and Ohio State both picked up close, quality wins against Wisconsin. The Badgers, with arguably the toughest schedule in America, are a legitimate top-10 team. That’s the biggest reason why the conference has exceeded national expectations.

With all due respect to Nebraska, which would essentially be eliminated with a loss at OSU, Wisconsin is the key to all of this because it faced both Michigan and Ohio State. The likely scenario is the Badgers run the table and face either one-loss Ohio State or undefeated Michigan in the B1G Championship.

And if you think the selection committee will question the legitimacy of the B1G as a whole, consider this stat (via Phil Steele): 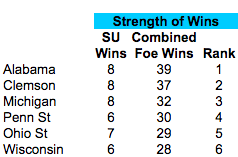 The B1G is the only conference with two legitimate playoff contenders in each division (go check out the trainwreck that is the SEC East). The Big 12 is in need of a miracle and the Pac-12’s only hope is an undefeated Washington. And while the ACC has battle-tested Clemson and Lamar Jackson-led Louisville, they play in the same division and would be against a non-playoff contender in the conference title game.

And sorry Western Michigan, but wins at Northwestern and Illinois were impressive for a Group of Five team, but those weren’t playoff-worthy wins.

Regardless of what happens outside of the B1G, it all comes back to the original point. The B1G has four legitimate contenders that could win out and make the field. Who knows? Maybe five. Odds are, two will meet in Indy with a chance to decide who plays on.

There’s still work to be done to ensure that happens. Lord knows there are sleeper games remaining for every contender. As we’ve seen, anything can happen on a November Saturday.

But in the brief history of the playoff system, the B1G couldn’t be in a much better spot on Nov. 1.

At this point, it would take a collective B1G collapse to get left out of the playoff field in 2016.