One of these days, the top six will stay the same.

Perhaps its wishful thinking for that this early in the season. The bigger pipe dream is thinking that I have every team pegged perfectly.

Call me crazy, but I didn’t think Purdue could handle Nevada at home with two weeks to prepare. Darrell Hazell earned another week in West Lafayette. But let’s wait to remove Purdue from the bottom spot until it can win a B1G game.

Rutgers didn’t get dropped for the effort against Iowa. Frankly, it was impressive that the Scarlet Knights contained C.J. Beathard like they did. They dropped because this is based on teams I would feel confident betting on moving forward. I have little confidence in this offense without Janarion Grant. At least right now.

And who says you can’t move up by taking a week off?

Saturday was about what we’ve come to expect from the Cats in 2016. Another solid defensive effort at home was squandered by offensive miscues and an inability to make the one key play late. Last year, Northwestern made those plays. This year, not so much. 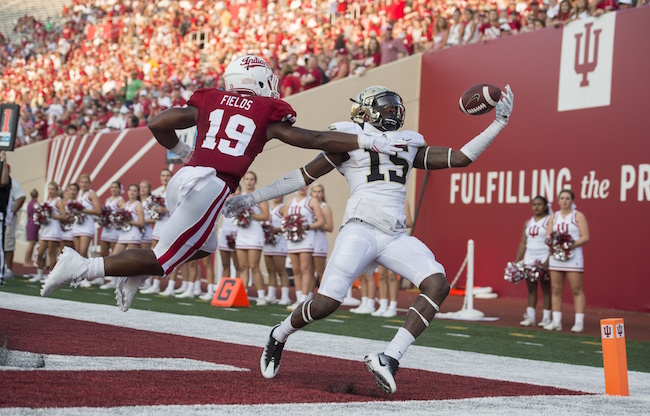 Yikes. How long will it take Indiana to become a touchdown-favorite against a non-conference Power Five team after that showing? The Hoosiers imploded with turnover after turnover and let a lesser Wake Forest team come into Bloomington and steal one. This offense has potential, but it’s still nowhere near the level the B1G’s top offense was at last year.

If not for such a poor week from a few of the bottom-tier B1G teams, Penn State would’ve fallen even further. James Franklin basically chalked up the blowout loss to Michigan being really good and PSU being really injured. Yes, the Lions are banged up at linebacker in ways that few teams — if any — are. Still, Saquon Barkley was the only one in white who looked like he belonged on the same field. The Lions have yet to put together one solid, all-around game this year. That’s not good in the B1G East.

Speaking of that aforementioned poor week for the bottom of the B1G, the Terps moved up by simply not playing. This team still has major questions about its run defense and offensively, we don’t know what Perry Hills will look like when he faces a B1G pass-rush. Still, it’s hard not to like the Terps, who STILL HAVEN’T TURNED THE BALL OVER.

I’m not saying I’m all in on the Gophers after beating Colorado State at home. But there is a stat I like about this team through three games. Minnesota played 180 minutes of football so far and trailed for just 13 of them. The Gophers don’t want to be in obvious passing situations. With Shannon Brooks back, they now have a three-headed rushing attack that’s one of the B1G’s best. When they’re ahead like that, it plays into the strength of this team.

On the bright side, the Iowa defense held a road opponent to single digits. Even with the offensive struggles, that’s a good formula. But with Matt VandeBerg out, this once-prolific passing game has major questions to answer this week. C.J. Beathard can’t bail the Hawks out on third-and-long with scrambles anymore. Iowa needs wideouts to step up in a hurry or defenses will load the box all year.

Last week, I was ready to say that MSU was on the cusp of competing with Michigan for that No. 2 spot. Then the Spartans were swallowed up at home by an underrated Wisconsin team. That didn’t look like a top-25 team. That pass protection was uncharacteristically awful, the quarterback play was sub-par and the defense couldn’t get off the field. Right now, the Spartans are banged up at linebacker and outside of Malik McDowell, they lack linemen who can get off blocks. Saturday in Bloomington could end up being a dogfight.

It would’ve been easy to go into Evanston with a big head. Coming off that huge Oregon win, everybody is saying “Nebraska is back.” The Huskers showed that they’re not playing down to competition like they did last year. That game actually should’ve been a four-touchdown game if not for two fluky goal-like fumbles. And lost in the shuffle was the fact that the 13 points were the fewest allowed by Nebraska vs. a Power Five team in the Mike Riley era. It’s all setting up well for the Huskers.

Man, what a difference a week makes. Wisconsin went from struggling to win at home vs. Georgia State to blowing out a College Football Playoff contender on the road. Alex Hornibrook was poised, the defense was at its absolute best — a scary sight — and it was the Badgers who ended up looking like playoff contenders. It baffles me that Wisconsin is a double-digit underdog at Michigan. There’s a chance this defense won’t even allow 10 points. If they play like they did on Saturday, the Badgers are plenty capable of up knocking off the other Michigan power.

We knew Penn State had its struggles, but the Wolverines made them look like a JV team. It was a reminder that Michigan has scary upside, despite what we saw against Colorado. The defensive line is as good as it gets, and when the offensive line gets rolling like that, the Wolverines can pound the rock all day against a lesser defense. But that was last week. Wisconsin’s defense is lightyears ahead of PSU’s injury-riddled group. For all those people still saying the Wolverines won’t be tested until they travel to East Lansing, tune in to the action on Saturday afternoon and let me know if Wisconsin is worthy of “testing” Michigan.

A bye week before the start of B1G play was probably a good thing for Ohio State. The Buckeyes could’ve easily had a tough time coming down from the high that was the Oklahoma game. The question now, of course, is will we continue to see this team improve. Will they look like a No. 2 team vs. lesser B1G foes? Or will we see this young team tighten up with increased expectations. Nothing about this group has looked stiff so far. But that trip to Madison isn’t very far off. Now isn’t the time to take the foot off the gas and get sloppy. We’ll learn plenty about the Buckeyes after watching how they treat these next few weeks.