Five WRs who could lead the B1G in receiving in 2016

Aaron Burbridge won’t be in East Lansing this fall.

The Michigan State receiver finalized his career catching 85 passes for 1,258 yards and seven TDs to lead the B1G. He caught eight more balls and earned 150 more yards than any other pass-catcher in the B1G last season.

Now that the decorated Spartan is gone, the conference’s top receiver spot is up for grabs. With seven teams returning their top pass-catcher from last season, several different guys could wind up with the honor.

Here are the top five candidates to lead the B1G in receiving this year:

Westerkamp has been a staple of Nebraska’s offense for the past two seasons and has more receptions than any returning receiver in the B1G.

In three years, Westerkamp hauled in 129 passes for 1,948 yards and 13 TDs. He snagged several passes worthy of the highlight reel and is one of the conference’s most acrobatic pass-catchers.

Westerkamp will be on the receiving end of passes from fourth-year starter Tommy Armstrong Jr. The two roommates have developed a unique chemistry and might be one of the best quarterback-receiver duos in the conference.

The 6-foot, 200-pound senior is 52 receptions and 741 yards short of owning school records in both categories. A year similar to 2015 and Westerkamp will leave Nebraska as one of the all-time great receivers.

One of only two sophomore receivers to tally 1,000 yards, Godwin averaged 84.7 receiving yards per game last year. He ranked second in the Big Ten in total receiving yardage at the end of the season.

Godwin is a great downfield threat for the Nittany Lions. He caught 12 passes for 30 yards or more in 2015, the most by any receiver in the B1G. He’ll continue to be a great weapon downfield, even as Penn State adopts a new offensive scheme.

RELATED: Five RBs who could lead B1G in rushing in 2016

He displayed a great knack for finding the football and is excellent at catching passes in traffic. No returning receiver from the B1G accumulated more receiving yards than Godwin last year.

If he’s as effective as he was a season ago, he’ll easily be one of the top pass-catchers in the conference again in 2016. 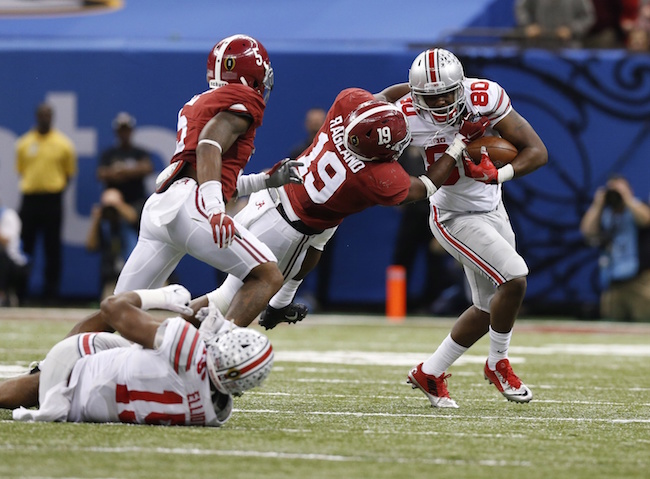 It might be generous to put a sophomore receiver with one catch to his name on this list, but Brown is worthy of the honor.

After a broken leg ended Brown’s season before it got started, the New Jersey native is at full strength heading into the season with high hopes coming from the Buckeyes coaching staff.

Urban Meyer said he expects an All-B1G type of season from Brown. Quarterback JT Barrett has compared the receiver’s hands to suction cups. Big things are expected out of the sophomore this fall.

Brown’s recovery and development this spring has created plenty of hype in the offseason. With so many playmakers leaving Ohio State after last season, Brown has the opportunity to emerge as the next great receiver for the Buckeyes.

Usually those guys find themselves atop the B1G statistically.

Indiana’s offense has been dynamic under Kevin Wilson and Cobbs has become the top-receiving target for the Hoosiers. He was the second sophomore to make the century club in 2015, totaling 1,035 yards and four TDs on 60 catches.

Cobbs is a reliable target who is serviceable in short yardage situations and can be a home-run threat. The junior does his best work outside the numbers and can turn short gains into big plays.

In Indiana’s pass-heavy offense, Cobbs will see plenty of passes thrown his way. The totals he posted as a sophomore could easily be trumped with a solid junior campaign.

The 6-foot-4 receiver causes match-up problems for defenders and possesses crafty footwork for his size. Even with a new quarterback under center, Cobbs is going to have plenty of passes thrown his way and could easily post back-to-back 1,000-yard seasons.

At B1G Media Days, Jim Harbaugh said that Darboh had passed teammate Jehu Chesson as the team’s no. 1 receiving target this fall.

Darboh caught 58 passes for 727 yards and five TDs in his junior season and made several big plays throughout the year. He has a flair for the dramatics, hauling in a number of passes with a high degree of difficulty.

Of Darboh’s 58 catches last year, 32 ended in gains of 10 yards or more. He averaged 12.5 yards per catch but that number could be much higher this fall.

The senior has all tools to lead the B1G in receiving in 2016. He’s got a 6-foot-2, 215-pound frame with great speed and finds ways to get open. Anything thrown near Darboh is likely to be caught.

Last year we just got a sample of what the Michigan receiver can do. This fall, he might be one of the top receivers in the country.