When Bret Bielema left Wisconsin for Arkansas in 2012, it was viewed by some as a slap in the face to the B1G.

The fact that someone would leave a program coming off three straight Rose Bowl berths to take over a 4-8 Arkansas program said plenty about the perception of the B1G vs. the SEC. At the time, it felt like the SEC was undoubtedly the destination for coaches across America, even for those without Southeast ties like Bielema. Besides getting a raise for himself, he also got an increased pool of money to spend on assistant coaches.

Now, Bielema would probably do anything to get a head coaching job in the B1G again. The Hogs coach was fired after five seasons in Fayetteville, where he compiled a 29-34 record (11-29 in SEC play). Arkansas was one of five SEC programs that will have a new head coach in 2018.

The B1G, on the other hand, will only have one. And go figure, he was arguably the top up-and-coming coach in America. Scott Frost was named the Home Depot Coach of the Year for the job he did rebuilding UCF. A few weeks ago, Kirk Herbstreit said that he’d be “shocked” if Frost didn’t end up at Florida.

Here’s the bit from @CollegeGameDay on Scott Frost. pic.twitter.com/rGp4XRJIjJ

That, of course, didn’t happen.

Frost spurned the Gators and Tennessee to return home to Nebraska. Jeff Brohm was also part of the fraternity of coaches who turned down Tennessee. Even with a reportedly significant raise to come to Knoxville, Brohm stayed at Purdue.

There’s plenty of evidence to back up that argument.

Obviously that’s not saying “every coach in America wants to come to the B1G.” Guys like Jimbo Fisher were paid $75 million to go to Texas A&M while Chip Kelly could’ve pretty much had his pick of anywhere and he went with UCLA. Each situation is different, as we saw with Frost, as well.

But there’s certainly a case to be made for why the B1G has become the best conference to coach in. And no, that’s not referring to getting to play against B1G West competition. Frankly, every Power 5 conference has a weaker division.

There is big news coming to the upcoming 2022-23 Big Ten football season (and NFL season). Ohio online sports betting will be officially launching on January 1, 2023. Pre-registration is now open at FanDuel Ohio, and you can get extra $100 bonus by signing up now. Take advantage now.

This boils down to numbers.

Check out the top 20 highest-paid coaches in college football, as compiled in the annual graphic from USA Today: 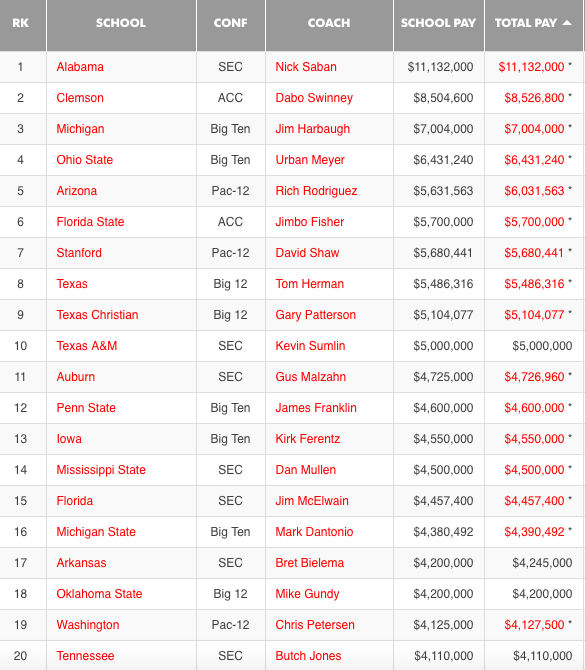 You’ll notice that among the top 20 salaries, here’s how they break down by conference:

With that stat in mind — salary is a pretty important element when discussing “desirability” — let’s focus on just the B1G vs. the SEC.

The top 20 shows that the SEC still has a slight advantage in terms of maximum compensation for its coaches, but if the cutoff was at No. 16, the B1G and SEC would each have five.

Interestingly enough, though, four of those seven SEC coaches were fired this year compared to zero for the B1G. Expectations are high in the SEC. A stat like that shows you that they’re still higher than they are in the B1G.

That peaked my interest about the job security aspect. The narrative — especially in the last few weeks — is that SEC programs have shorter leashes on their coaches. The numbers actually show that B1G programs fired more coaches after four years or less (7) than the SEC (6) in the last decade.

But there’s one stat that tells you all you need to know about why the B1G is more desirable for coaches than the SEC. In the last decade, here’s a list of all the B1G coaches who were fired despite having had multiple nine-win seasons in the 21st century:

That’s the entire list. For the SEC, that’s a different story:

By the way, that’s eight different SEC programs (more than half) who fired a coach with multiple nine-win seasons the last decade. Five of those SEC coaches were fired in the last three years. And Pelini’s firing at Nebraska was extremely controversial because he won at least nine games every year he was in Lincoln.

So if the compensation gap has closed (that’s what $50 million in annual TV revenue will do), why wouldn’t a coach find more comfort in the B1G compared to the SEC or any other conference?

There are scenarios that I like to run through when I think about that argument. Like, what would have happened to Mark Dantonio after 2016 if that 3-9 season happened at Auburn? You know, the school that was reportedly considering firing Gus Malzahn if his squad, which ranked No. 4 nationally at the time, didn’t beat No. 1 Alabama.

Do you think McElwain, who was coming off consecutive division titles in his first two seasons at Florida, would’ve been fired in the middle of his third year if he accomplished the same feat in the B1G? I have a tough time believing that. Shoot, even Michigan let Rich Rodriguez finish his third season.

It’s not just some narrative that the SEC demands more. For crying out loud, THE SEC’S OFFICIAL HASHTAG IS LITERALLY #ItJustMeansMore. How does that translate for potential coaches on the move?

ESPN’s Todd McShay shared some revealing insight on that on “The Russillo Show” a couple months ago.

‘@McShay13 shares a story of why one coach, who was in high demand, wanted nothing to do with coaching in the SEC when they came calling 👀 pic.twitter.com/oTKsoZbYuS

None of that sounds unbelievable.

“That SEC, they eat their young,” Moos said, “…there’s no patience.”

Did that factor into Frost’s decision to turn down the SEC to go to Nebraska? We don’t know, but you can bet Moos made a calculated move to mention that publicly and privately. And if Tom Osborne brought it up when he talked to Frost over the phone, I wouldn’t be shocked, either.

It’s ironic that of all the places in the B1G for that comment to come from, it came from Nebraska, which was the only B1G team in the last decade to have fired a coach with multiple nine-win seasons. But that certainly isn’t the norm in the B1G.

You can say a lot about the B1G. The conference struggles in the postseason. It doesn’t produce elite quarterback prospects. The B1G isn’t the premier conference in college football. Those are all fair critiques. But there’s one thing that can’t be denied.

It’s the best conference to coach in.