Is the B1G better than the SEC right now?

So Paul Finebaum — the biggest SEC apologist there is — believes that the B1G and not the SEC is the best conference in the country right now.

“Right now, repeat after me, read my lips: the Big Ten is the best conference in college football,” Finebaum said while appearing on ESPN.

Chris Wright, Editor for Saturday Down South, attempted to argue why the SEC is still better than the B1G. While he brought up facts from 20 years ago, forgot about LSU-Wisconsin and focused his attention on Iowa, I made points about why he was wrong. And more importantly, I debated the question Finebaum actually brought up.

Which is the better conference right now?

WHY THE SEC IS BETTER THAN THE B1G

1. About that non-conference slate …: At the risk of bringing up history — no, not the SEC beatdowns of postseasons past — did you see what the esteemed B1G did last weekend?

While they were gushing over Ohio State beating an Oklahoma team that Houston already beat, Georgia State — then 0-2 Georgia State — went into Camp Randall Stadium and led No. 9 Wisconsin 17-13 midway through the fourth quarter. The Badgers rallied at home to beat a team in its FBS infancy. Hooray.

At least they won.

Iowa (more on the Hawkeyes in a minute) couldn’t even do that. The Hawkeyes, No. 13 and playing at home against an FCS program — albeit arguably the best one — lost to North Dakota State, whose quarterback sounds like a $300 composite bat — Easton Stick. 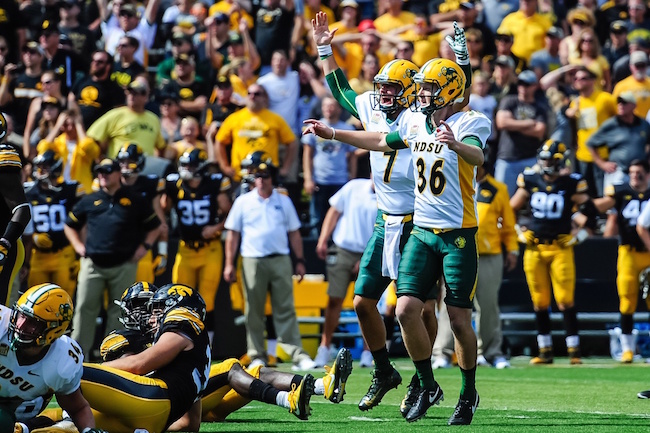 2. Iowa is … so B1G: We’ve seen this so many times from our northern neighbors. I spent seven years in Indianapolis as a college editor covering the B1G. It was the same thing every year. Just like this year.

The B1G is Mr. September. And Mr. October.

Because three-fourths of the B1G is bye-week material, good teams like Iowa continue to win and often appear much better than they are. They tend to be ranked accordingly. It’s hardly surprising that three B1G teams are ranked in the top 10 this week. Last year, the Week 4 AP Poll had Ohio State No. 1, Michigan State No. 2.

Remember last November, when Iowa was still undefeated, ranked No. 4 and analysts actually thought of them as a playoff contender? It was laughable if you actually watched them play.

Iowa faced exactly two Top 20 teams — No. 19 Wisconsin and No. 20 Northwestern — during the regular season.

It won the weak West and lost to Michigan State in the B1G title game. Michigan State, of course, went to the playoffs, where Alabama promptly spanked Sparty 38-0. Iowa went to the Rose Bowl — hardly a consolation prize to anybody in the Big Ten — where Stanford promptly stomped the Hawkeyes 45-16.

At least we won’t have to worry about Iowa the rest of the year. The Hawkeyes fell from No. 13 all the way out of the rankings this week.

3. Michigan might be this year’s Iowa: Big Ten teams play only three non-conference teams. The Wolverines took care of Hawaii, Central Florida and Colorado. They should beat Wisconsin at home. Jabrill Peppers is unbelievably great, as dynamic as anybody in the SEC. Outside of that, we won’t learn anything of substance about the Wolverines until Oct. 29, when they travel to Michigan State. They close the season at Ohio State in a game that likely will knock the loser out of the playoff discussion.

Regardless of what happens in that game, please don’t beg for a playoff rematch.

4. The SEC has better quarterbacks, better skill players, better defensive linemen: This always plays out in the NFL Draft, too. And it will again this year in April. Even the ACC has better high-end quarterback prospects than the B1G.

The B1G hasn’t had a quarterback taken in the first round since 1995.

The SEC could have another this year in Chad Kelly and could have the first two off the board in the 2019 draft in Jacob Eason and Jalen Hurts.

I’m not sure the B1G has ever had anybody quite like Eason or Hurts, though they sure thought mighty highly of Drew Henson.

Look, everybody raved about Michigan State’s Connor Cook last year too. He dominated the B1G. Remind me again how he fared against Alabama? He was 19-of-39 with a season-high two interceptions.

5. Talk to me in January: As much as critics like to claim the SEC is Alabama and everybody else, the B1G is even much more tied to Ohio State — its only outright national champion in 60-plus years. (Michigan shared the 1997 national title. Nebraska and Penn State won before joining the league; Michigan State and Iowa shared a title, etc.)

Both leagues are extremely top heavy. The SEC is deeper, but ultimately, we’re comparing the SEC’s four best against the B1G four best.

Nobody cares whether Illinois might be able to beat Kentucky. Both leagues have teams capable of losing to anybody — though ranked SEC teams typically don’t lose at home to FCS schools.

Obviously we’re spoiled and they’re envious. Eight national championships produced by four programs in 10 years will do that to us and them.

Michigan State and Michigan are terrific. But neither is built to deal with Alabama. Ohio State might be.

With any luck, we’ll find out in January. 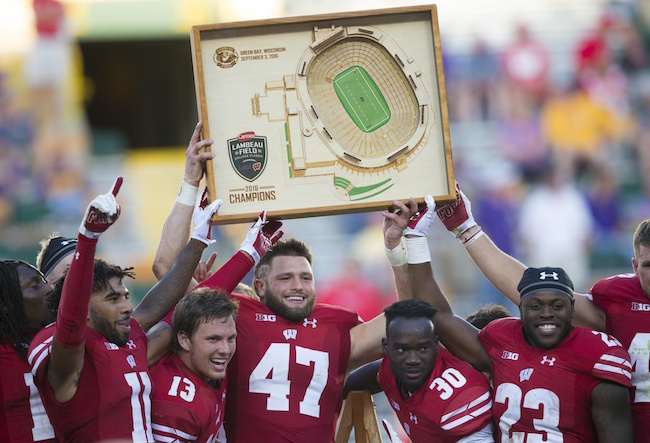 WHY THE B1G IS BETTER THAN THE SEC

1. Remember LSU-Wisconsin? In the only head-to-head battle this year between the B1G and the SEC, the B1G won. Even better, it was a battle between the SEC’s No. 2 team (No. 1 in some peoples’ eyes) and the B1G’s fifth or sixth-best team.

Wisconsin beat LSU at its own game. In B1G country, all we heard about during the offseason was LSU competing for a national title and Wisconsin picking up the pieces. After the conference’s only head-to-head matchup, that script was flipped.

2. There’s actual depth in the Top 25: I know that Kentucky fans flex their muscles when Alabama wins, but that doesn’t reflect conference dominance. The same argument SEC fans attempt to make — Ohio State is the only B1G team worth anything — is the one the B1G could make.

Outside of Alabama, who really looks the part? Texas A&M? Wait, didn’t Nebraska — a five-win team in the B1G — pound that same UCLA squad in the Foster Farms Bowl last year at a neutral site? Unimpressed.

And Georgia? You mean the same team without a double-digit win three weeks into the season with the likes of Nicholls and Mizzou on the schedule?

Sorry, but the B1G has a better top five teams this year. Michigan State and Ohio State look like playoff contenders already. Michigan hasn’t played well yet, but it hasn’t had a scare against FBS competition like Georgia, Tennessee or even LSU.

Even Nebraska has been more impressive than Georgia, LSU and Tennessee. Make your Iowa jokes all you want, but there’s only one B1G team in the expected upper-half that hasn’t lived up to expectations so far.

Can the SEC say that? 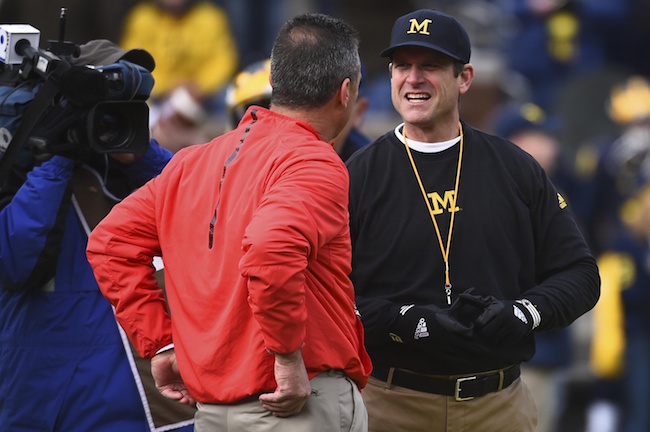 3. The coaching is better: B1G coaching is as good as its ever been. That’s no secret. Outside of Nick Saban, who in the SEC isn’t in their first season or on the hot seat? You can try and argue that “there’s more pressure in the SEC.”

For argument’s sake, lets say Urban Meyer and Nick Saban cancel each other out. Is there an SEC coach as good as Mark Dantonio? Jim Harbaugh? Definitely not.

Paul Chryst is in his second year at Wisconsin. He and Les Miles — the SEC’s “second-best coach” — had an entire offseason to draw up a game plan. Miles got out-coached by a guy who probably isn’t even considered a top-five coach in the conference. The B1G does way more with far less talent than the SEC. Why? Better coaching.

4. The quarterback play is better: Despite the fact that the SEC consistently gets the five-star quarterback recruits, it’s the B1G that has better quarterbacks right now. Chad Kelly is considered the SEC’s top quarterback. He’s been horrific against pressure and his ball security is dreadful.

J.T. Barrett, on the other hand, is No. 2 in the Heisman Trophy voting and he hasn’t turned the ball over since the first quarter of the season opener. I’ll take Barrett and C.J. Beathard — he had one bad game but is still 14-1 in the regular season — over any SEC quarterback.

Sure, the future might look nice with Luke Del Rio and Jacob Eason, but the present is still grim for SEC quarterbacks. The quarterback play is so bad that Purdue rejects are earning starting jobs. at top-tier SEC programs. Need I say more?

5. The damage is already done: Every year, the SEC makes its reputation during non-conference play and bowl season. Usually, the SEC handles itself well. That’s why when the SEC “starts beating up on each other,” the two and three-loss teams remain in the Top 25. This year is a different story.

So to recap, the B1G won nearly as many games against Top-25 opponents — only one was a true home game — as the SEC won against Power Five teams. That’s why four B1G teams are ranked in the top 11 compared to two for the SEC. The SEC can no longer make the argument that the B1G is only where it’s at because of a creampuff conference schedule. The B1G already did its damage. And until bowl season, the SEC will be playing catch-up.