It was the start of the conference slate for eight B1G teams.

For some, that was a good thing (Wisconsin). For others, that was a bad thing (Michigan State).

Here are the grades for every B1G team in action over the weekend:

The Bloomington Herald-Times’ Jim Gordillo said it best. Richard Lagow’s 496-yard, five-interception effort in Indiana’s loss was like throwing a no-hitter with 12 walks and losing 3-2. Lagow’s record-breaking yardage mark didn’t matter on a day in which he made far too many mistakes. Credit the IU defense for not completely crumbling when IU lost the turnover battle 5-0. Still, that was a game the Hoosiers should have been much cleaner coming off a bye.

A ‘C’ is meeting expectations and getting by. That’s exactly what Iowa did by winning a game everyone believed it should. The passing game still struggled and the Hawkeyes never got the distance they should’ve, but Josey Jewell and the Hawkeye defense did what was needed to pull out a road win. That could’ve been a much scarier second half for the Hawkeyes if Janarion Grant didn’t get hurt. 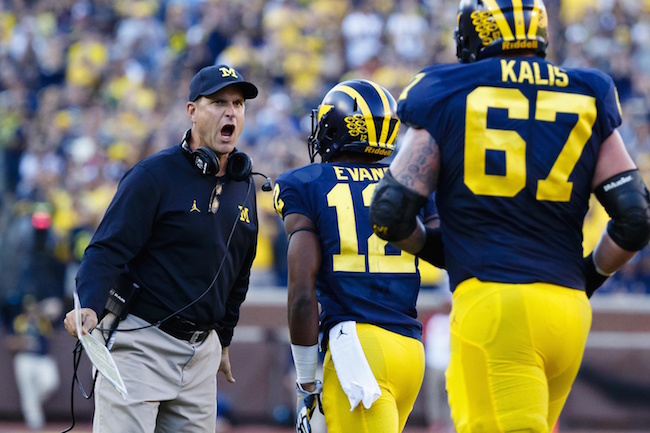 Remember all that talk about Michigan getting beat in the trenches? The Wolverines scored six rushing touchdowns while the defense racked up 13 tackles for loss. Penn State isn’t Penn State right now, but that’s still an impressive effort from a team that had its difficulties against UCF and Colorado.

It’s so rare to see Mark Dantonio’s team deliver an effort like that. Tyler O’Connor was pressured so often that by the second half, he wasn’t even going through his progressions anymore. The MSU offensive line was uncharacteristically overmatched and O’Connor didn’t help himself. And defensively, the Spartans let a redshirt freshman come into East Lansing and steal the show in his first career start. The only reason MSU didn’t get a failing grade was because it held the Badgers to three yards per carry to the No. 11 team without Riley Bullough. Other than that, there wasn’t much positive for the Spartans all afternoon.

The Gophers didn’t blow out Colorado State as the experts expected, but they were in control throughout the afternoon. That was thanks to a dominant ground game. With Shannon Brooks back, the Gophers ran for 243 yards and four touchdowns. CSU didn’t have an answer for the combination of Brooks and Rodney Smith. Mitch Leidner was accurate, but he didn’t stretch the field enough for Minnesota to run away with anything. Still, it’s a 3-0 start heading into a favorable B1G play schedule.

And here’s this one more time:

Running the ball for 310 yards against that Northwestern defense is no small feat. Tommy Armstrong accounted for a career-high 132 yards rushing and led Nebraska to a solid road win. Sure, the Wildcats lost to the likes of Western Michigan and Illinois State at home. But Pat Fitzgerald has always drawn up successful game plans against the Huskers in the past. This time, the Huskers didn’t have the back-breaking play in the fourth quarter. That’s becoming a positive trend for this team.

If Anthony Walker Jr. holds on to that interception, this could be a different conversation. But as it stands, the Wildcats still lacked offensive firepower and made too many costly mistakes at home. The Wildcats defense, which looked like one of the best in the country last year, allowed 556 yards. Regardless of the final score, that can’t happen. And can someone please find Northwestern a kicker?

Let me preface this by saying that it’s a shame how decimated the Penn State linebackers are right now. But that’s life. And life right now for the Lions is grim. The most telling stat was the fact that outside of Saquon Barkley, the Lions had -16 first-half yards. That’s tough to stomach. Joe Moorhead’s offense couldn’t get in any sort of rhythm with the pressure Michigan applied. Barkley looked like the only Penn State player who belonged on the same field as the Wolverines. Not good. 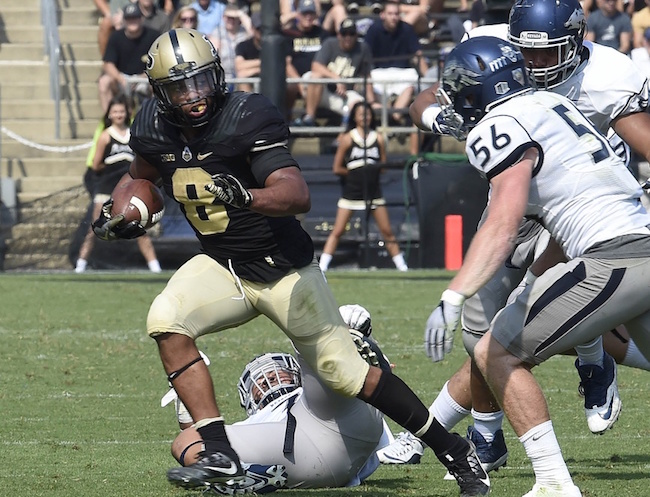 If Darrell Hazell lost to Nevada, nobody knows if he would’ve had another week. But thanks to what his team did on Saturday, Hazell didn’t have to even think about that possibility. David Blough shook off a rough start and delivered one of the best games of his young career. Markell Jones was healthy and dominant. That was also tied for the fewest points allowed by Purdue in the Hazell era. Evan Panfil and Eddy Wilson deserve plenty of credit for that. Even in the few games the Boilermakers have won in the Hazell era, the defense usually isn’t pulling its weight. It did on Saturday.

It’s not easy to carry on when your top weapon goes down with a season-ending injury. It was telling that Grant ripped off a 76-yard catch and run, got injured and had to watch Rutgers’ offense get stood up on the goal line. The offense struggled to sustain drives after Grant left, and as a result, the Knights couldn’t get over the hump to pick up a big home win. On the bright side, a defense that allowed 28 points to New Mexico two weeks ago contained an All-B1G quarterback and didn’t let Iowa take over in the ground game.

As a great person once said, “that’s how you draw it up.” Rarely do you see Mark Dantonio get out-coached. Paul Chryst did that. He drew up the right game plan to get Alex Hornibrook comfortable, and it paid off. Hornibrook’s first career start was impressive, to say the least. But even more impressive was the job the Wisconsin defense did. Per Pro Football Focus, the Badgers pressured Tyler O’Connor on 51 percent (!) of his dropbacks. No wonder he looked lost all afternoon. The Badger defense is going to cause all sorts of problems in the B1G this year. Look out, Michigan.