I’ve said before that I’m not big on massive power rankings shakeups on a week-to-week basis.

Often times, power rankings turn into which team played the best the week before. In my opinion, that’s not what they should be based on. I rank based on which teams I’d feel most comfortable betting on to win any given game on a neutral field.

Is that a perfect science? No, but it’s the best way to properly evaluate which teams look like the best right now. Did I ever think there’d be a scenario in which Iowa would be ranked six spots lower than Maryland? No, but I would bet on one right now, and I certainly wouldn’t bet on the other.

It’s hard to argue with the product on the field. I’m more worried about Iowa than Michigan State, neither of which have played like defending division champs. But MSU at least showed that it can beat a quality team on the road. Iowa can’t even win a home against North Dakota State or Northwestern.

With that in mind, here are the Week 6 B1G Power Rankings:

Purdue is allowing 40 points per game vs. Power Five teams since the start of 2015. Even if Darrell Hazell’s offensive plan does start working, the Boilers don’t stand much of a chance to ever get the wins to show for it. The fact that Purdue boasts the 112th-ranked run defense having only played one Power Five team (Maryland) is a bad, bad omen.

The Scarlet Knights are looking at a run-only offense for 2016. Ohio State was a harsh test for Rutgers in their first game without Janarion Grant, but still. Completing one pass in the final 58 minutes of a game shows that this team might be better off just trying to pound the rock or come up with some misdirection. There are ways Rutgers can get creative with it. This, however, was not one of them.

Illinois actually looked like it made some needed defensive adjustments during the bye week after a humbling home loss to Western Michigan. That final score didn’t tell the whole story. Credit the Illini for at least pushing a top-15 team on the road. The offense still lacks an identity, but a showdown against Purdue is usually the remedy for offensive woes.

Wow. Three weeks ago, Iowa was at No. 3. How can they already be down to No. 11? Well, if you were betting on Iowa to win a game on a neutral field — the basis for these rankings — who would you pick them to beat right now? You can’t say Northwestern because the Hawkeyes should’ve had every reason to shut down a weak offense, improve to 2-0 in B1G play and still be on track to compete for the B1G West title. This team has so many issues on both sides of the ball that it makes you wonder who they can beat. 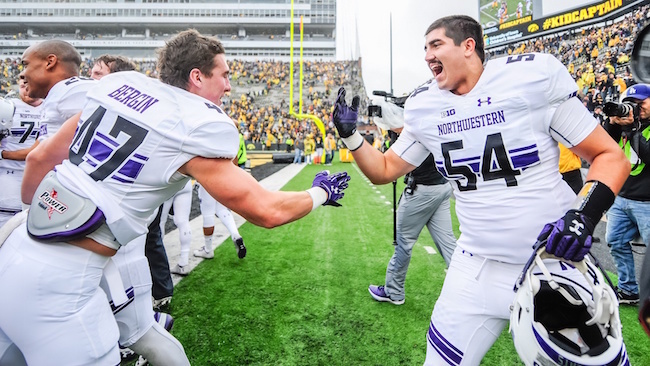 Northwestern has the worst loss of any B1G team this year and one of the B1G’s best wins. Fortunately for the Wildcats, the latter was last week. The Wildcats found their offensive mojo. Austin Carr lit up the Hawkeyes, as did Justin Jackson. And defensively, Northwestern delivered their fourth straight solid effort. The special teams woes made that game closer than it should’ve been. Still, the Cats have life.

The Gophers should’ve won that game. For the most part, they were the better team in State College. Still, the big plays did them in. All of the sudden, Minnesota could be in essentially a B1G West elimination game in its second conference game. This running game is for real, but the Gophers still need to show they can make winning plays and stay composed down the stretch against quality competition.

The Lions showed that they have a bit more moxie than last year’s group. That would’ve been an easy game for Penn State to mail it in and accept another humbling loss. Trace McSorley bounced back in a big way after the Michigan disaster. The sophomore has plenty of poise in the second half, which is not something you can teach. If PSU can get some linebackers back sometime soon, it would stand a much better chance against the B1G East powers.

If Richard Lagow doesn’t throw five interceptions against Wake Forest, Indiana is 4-0 with a win vs. a top-25 team. But that’s not how life works. Yes, the Hoosiers took down Michigan State. So why aren’t they ahead of MSU? I’m still taking MSU to win that game on a neutral field if they played next week. If IU’s defense somehow contains Ohio State’s offense in Columbus on Saturday — containing is allowing fewer than 40 points — then that’ll say a lot. 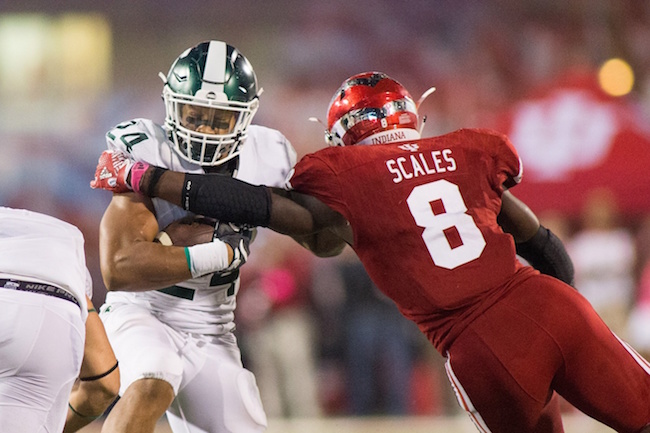 I know, I know. Michigan State is 0-2 in B1G play and losing to teams it hasn’t lost to in 10 years. The sky is falling in East Lansing and some are wondering if this team will even get to eight wins. Call me crazy, but I still believe the Spartans are better than most of the middle-of-the-pack B1G teams. MSU is well below the top three B1G teams right now, but the Spartans have too much talent and too good of coaching to continue this brutal start to B1G play.

Maryland hasn’t played anybody yet. I get that. But the Terps have outscored their opponents 173-58 this year and rank in the top 15 in FBS in both scoring offense and defense. And the Terps are one of five B1G teams that’s played at least two road games. Could they struggle against better competition? Perhaps. The B1G East isn’t kind to unproven teams. But if the Terps win in State College, they’ll be firmly in the top 25 with two home games against unranked teams to follow. Not to get ahead of ourselves, but DJ Durkin has this thing rolling in the right direction right now.

Nebraska enters the bye week with three things: A top-25 win, a conference road win and an undefeated record. Who’s the only other B1G team that can claim that? Ohio State. So why aren’t the Huskers higher? They simply haven’t been pushed like Wisconsin. The Badgers faced three better teams than the best team Nebraska played — all away from home — and came away 2-1 with the only loss being a 7-point defeat to No. 4 Michigan. Edge, Wisconsin. 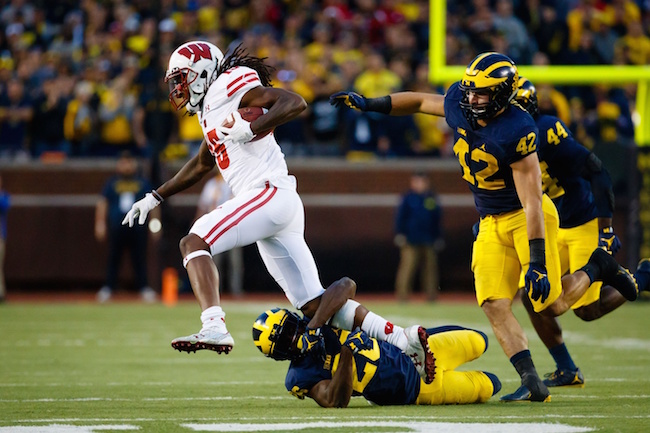 That’s three top-10 teams that the Badgers held to 14 points or less, none of which came at home. If that doesn’t prove that this team is legitimate, I don’t know what will. Alex Hornibrook is going to make some freshman mistakes like he did in Ann Arbor. He’s also going to make some throws like the ball he dropped into the arms of Dare Ogunbowale. As long as he makes a few more of the latter, this defense is going to give the Badgers a chance to beat anyone in the country.

Michigan got the quality win to legitimize its top-four ranking. The Wolverines did what the Spartans couldn’t do, which was make a freshman quarterback look like a freshman quarterback. This is a next-level defense that’s going to keep Michigan in the hunt for a B1G title. The offense, however, is still a work in progress. The running game still hasn’t proven it can take over against quality competition. Wilton Speight is still prone to first-year starter mistakes. The kicking game is still atrocious. So yes, the Wolverines did create more of a divide between them and the rest of the B1G by beating Wisconsin. But they still don’t have quite the firepower that Ohio State has.

Last year’s squad — with all of that NFL talent — rarely covered a massive spread. This year’s group makes 38-point spreads look like a joke by the start of the second half. How dominant has Ohio State been in the first part of the season? The Buckeyes surrendered just two offensive touchdowns. That’s best in the nation. They averaged a defensive touchdown per game, which is tied with Alabama for tops in FBS. The Buckeyes are first in the country in scoring defense (9.3 PPG) and third in scoring offense (57 PPG). How anyone will even hang around — much less win a game — against OSU is the new question. This team as scary as it gets in college football right now.