Wisconsin and Ohio State were the top two defenses in the country last season, allowing fewer points than any other FBS program. Michigan wasn’t far behind, coming in as the nation’s sixth-best defense in points allowed per game.

Overall, the conference landed six teams in the top 25 defensively, marking one of the more successful seasons on that side of the football.

Those standards will be hard to replicate in 2016, but several teams are capable of shutting down opposing offenses. Which teams will be big on the defensive side of the ball in 2016?

Here are the best defenses heading into the season:

The Wildcats do need to fill some pretty big holes heading into the season. A knee injury that will force cornerback Keith Watkins II to sit out this year doesn’t make Pat Fitzgerald’s job any easier.

Even with all the fluctuation and inexperience, Northwestern should field a formidable B1G defense.

Replacing defensive ends Dean Lowry and Deonte Gibson will be a challenge, but Fitzgerald is confident that Ifeadi Odenigbo and Xavier Washington can fill those voids.

Last year the Wildcats allowed 18.6 points per game. It was the lowest average a Northwestern defense has posted since the 1995 Rose Bowl team that held opponents to a 15.1 points per game average.

Northwestern may not be quite that good again in 2016 but offenses will struggle to find the end zone against this defense. 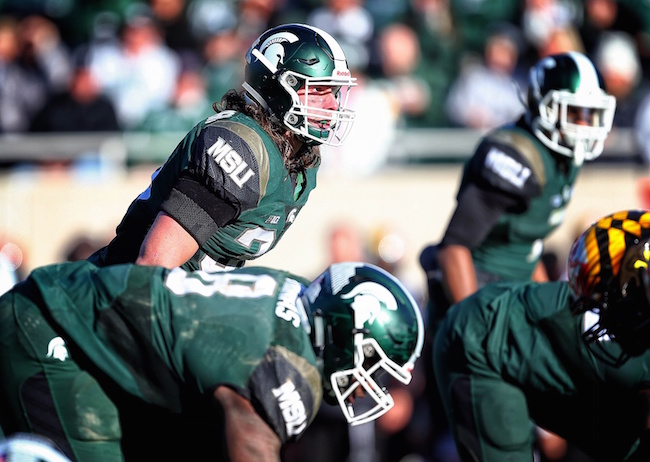 Michigan State endured a lull last fall, surrendering 349.9 yards and 21.7 points per game. Those were the highest totals the defense had allowed since 2010. Still, it founds itself as a top 25 defense in both categories.

Despite the slight decline last year– which could largely be attributed to the departure of former defensive coordinator Pat Narduzzi – Dantonio sees the potential in his 2016 bunch.

“I think we have the players in place to be as good or better than last year, I do,” he said. “We have some guys that are younger players that need to fill in.”

Riley Bullough, Jon Reschke and (presumably) Ed Davis will be the anchors to a deep and talented linebacker corps. Last year, Bullough led the team with 106 tackles. Two years ago, Davis tallied 12 tackles for loss.

The secondary should be solid, too. Vayante Copeland returns after suffering a neck injury that left him sidelined for much of the 2015 campaign. He’ll join Montae Nicholson and Demetrious Cox as part of that unit. Both recorded three interceptions in Michigan State’s B1G title run.

Defensive line will be the biggest question mark for the Spartans this season. Preseason All-American Malik McDowell is the only member of last year’s front line that will be back in East Lansing.

Under the direction of Dave Aranda, Wisconsin’s defense ascended to one of the best units in the country. Now, it’s up to polished veteran Justin Wilcox to sustain that success in Madison.

Wilcox will have an outstanding group entering his inaugural season in the B1G, as the Badgers bring back seven members from a unit that surrendered a nation-best 13.7 points per game.

The front seven will be Wisconsin’s greatest strength this fall. That group returns six starters including Vince Biegel, T.J. Edwards, Jack Cichy, and Chikwe Obasih. Thanks to their efforts, the Badgers were the country’s fourth-best team defending the run, allowing a paltry 95.4 yards per game.

A depleted secondary will be the biggest issue for Wilcox in his first year in Madison. Two-time All-Big Ten honorable mention and 37-game starter Sojourn Shelton will be a cornerstone for that unit. Fresh faces are going to be expected to step up quickly if the Badgers hope to maintain their status as one of the best all-around defenses in the college football.

Wisconsin does have high expectations for some of its unproven talent. T.J. Watt, Derrick Tindal and D’Cota Dixon all have potential to be household names by the end of the season.

If Wilcox irons out the uncertainties in the secondary, the Badgers have the ability to be one of the top defenses in the country again.

Desmond King’s decision to return for his senior season instantly gave the Hawkeye defense a boost as Iowa hopes to repeat as Big Ten West champs again this year.

There’s plenty to like about a defense that forced 27 turnovers last season (second in B1G) while holding opponents under a 21 points per game average.

Two key losses that Kirk Ferentz will attempt to replace come on the defensive line.

The Hawkeyes lost defensive ends Drew Ott and Nate Meier, the team’s top two pass-rushers last season. Those are gaping holes to fill. The coaching staff seems to be high on 6-foot-8, 270-pound sophomore Matt Nelson to pick up the slack.

Even with a few key pieces missing, Iowa has the experience to have a special season on the defensive side of the ball.

Expectations are high in the second year of the Jim Harbaugh era in Ann Arbor. Michigan has all the pieces to be the most intimidating defensive teams in the B1G and in the country.

The Wolverines only have six starters back but two of those may be some of the best defenders the conference has to offer.

Sophomore Jabrill Peppers and senior Jourdan Lewis are the two players that have received the most attention. The numbers for the two weren’t eye-popping, but they are often regarded as two of the most athletic players in the B1G.

After leading the team in sacks (6.5) and tackles for loss (14.5), defensive end Chris Wormley will be back in the trenches for the Wolverines this fall as well. The college football world will also catch a glimpse of the nation’s top overall prospect Rashan Gary on the defensive line, too.

Michigan was the fourth-best defense in the FBS statistically last season, holding teams to an average of 280.7 yards per game. It ranked third against the pass, giving up 158.5 yards through the air per contest.

Most impressively though, the Wolverines did an excellent job of keeping opponents off the scoreboard.

They posted three-consecutive shutouts, beating BYU, Maryland and Northwestern by a combined score of 97-0. Michigan held eight of its 13 opponents under the 20-point mark and surrendered an average of 16.4 points per game.

New defensive coordinator Don Brown will also be an asset to the Michigan staff, as well. His defenses at Boston College have been tenacious during his three seasons, peaking as a top five unit in the nation last fall.

From the returning talent to the incoming prospects and the coaching staff, the Wolverines have everything necessary to be the best defense in the B1G next fall.

Anything short of that could be a disappointment.