The best player every B1G team will see in Week 1

Believe it or not, we’re just one short week away from the start of the B1G football season. The long offseason will finally come to an end and we can all get back to talking about actual games.

So lets take a look at the player each B1G team has to find a way to shut down in Week 1:

The skinny: Yes, Murray State is an FCS team coming off a 3-8 season, but the Racers have a talented quarterback. A third-team preseason All-American, Humphries is the active leader in yards per game (262). The 6-3, 220-pound signal-caller threw for 3,778 yards and completed an FCS-best 30 passes per game. Get ready to hear Lovie Smith praise Humphries a TON in the coming days.

The skinny: The junior linebacker led the team in tackles last year. More importantly, he had a career-high 13 tackles in last year’s meeting with Indiana. He was actually a big reason that IU’s high-powered offense was held in check. First-year defensive coordinator Ron Cooper will have plenty of time to draw up a defensive game plan that revolves around Wint.

The skinny: Iowa’s offensive line might be the best in the B1G. Keeping Jones away from C.J. Beathard won’t be a walk in the park. The preseason first-team All-MAC selection had double digit sacks last year. He’s a speed guy off the edge, which will make Beathard’s mobility that much more important.

The skinny: Say what you want about Howard — last year’s 76-0 loss to Boston College said a lot — but they have a play-making secondary. Craig Johnson blows up plays in the backfield from the strong safety position and Hunt is a ballhawk at corner. What did Maryland do more than any team in the country last year? Throw interceptions. We’ll see if Walt Bell’s new offense can have a turnover free game against Hunt and Co. 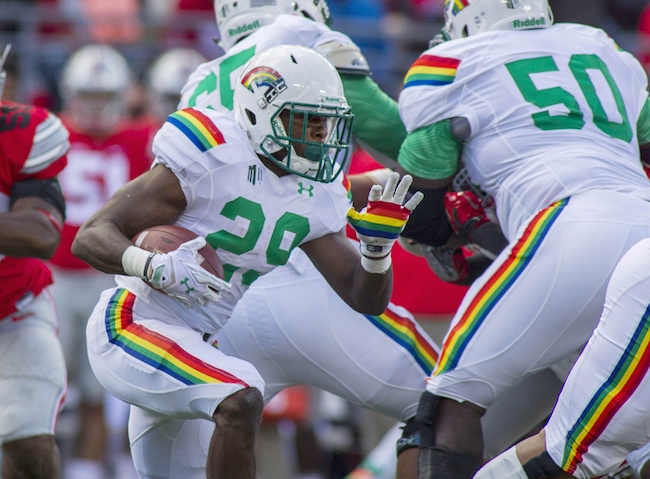 The skinny: This would’ve gone to defensive linemen Kennedy Tulimasealii, but he was kicked off the team after multiple offseason arrests. Instead, the Rainbow Warriors’ tailback gets the nod. Despite Hawaii’s struggles, Harris averaged 165 rushing yards per contest in the final four games of 2015. And just in case Michigan needed another reason to want to shut him down, he’s a Columbus, Ohio native.

The skinny: Fun fact: Furman had more interceptions (10) than sacks (8) in 2015. Four of those interceptions came from Robinson, who earned first-team All-Southern Conference honors last year. The 6-2, 220 pound safety can cover and make open-field tackles (he had 12 against Virginia Tech last year). Tyler O’Connor will have plenty on his mind in the opener, but he’ll have to keep an eye on Robinson.

The skinny: The most versatile and explosive player on Oregon State’s roster, Bolden is capable of making the game-changing play needed to pull off a road upset. The senior led the team in all-purpose yards and receptions, and he became to first player in school history to return a punt a kick for a touchdown in the same season. Special teams coverage can often be rusty in Week 1 games. If the Gophers are in that department, Bolden can make them pay.

The skinny: Nobody is picking Fresno State to put up much of a fight in Lincoln, but the Bulldogs do have a talented corner in Glass. The JUCO transfer picked off a team-best four passes last year and is an all-conference candidate as a senior. Tommy Armstrong’s turnover-prone ways will be tested if he chooses to pick on Glass.

The skinny: Forget the question about if Davis is best wide receiver in the MAC. Is Davis the best receiver in the country? He’s the FBS active leader in receiving yards after three seasons of at least 67 catches and 941 yards. He’s big (6-3, 213 pounds), fast, and plenty capable of dominating the big boys. He lit up Michigan State for 10 catches and 154 yards in last year’s season opener. Northwestern cornerback Matthew Harris will have his hands full, to say the least.

The skinny: Valdez is a tackling machine. He finished tied for second in the country with a whopping 144 tackles in 2015. No returning FBS player had more tackles than Valdez. The first-team All-MAC selection is going to be everywhere in Week 1. Ohio State’s new group of skill players will get to know Valdez quite well.

The skinny: If there’s anything that can derail Penn State against a MAC school, it’s a dominant pass-rusher. Waugh is one of 28 defensive ends on the Ted Hendricks Award Preseason Watch List. He had 12 tackles for loss and nine sacks in just 10 games last season. The 6-1, 262-pound senior is the first elite pass-rusher that Joe Moorhead’s new offense will face. How the Lions handle him will be a good early sign for how this unit will look in 2016. 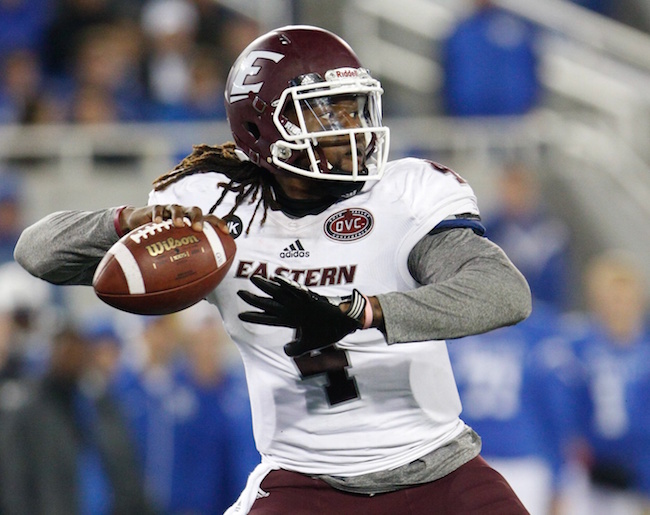 The skinny: Coney actually doesn’t have the starting job locked down yet. He’s competing with former Missouri quarterback Maty Mauk, who transferred to EKU after multiple off-the-field incidents. Assuming Coney takes the first snap, he’ll be a handful for Purdue defense that has struggled to stop the pass in the Darrell Hazell era. The Cincinnati transfer threw for 2,471 yards and 23 touchdown passes in 11 games for EKU as a junior. Whether its Coney or Mauk, Purdue’s defense won’t face a typical FCS offense in the opener.

The skinny: Easily the best defensive player on this list, Baker is as good as it gets in the secondary. The preseason first-team All-American can cover, tackle and make game-changing plays all over the field. He led the Pac-12’s top defense in 2015, and many expect him to do the same in 2016. Drew Mehringer’s offense will debut against one of the top DBs and one of the top secondaries in the country. Welcome to the big time.

The skinny: Last, but certainly not least, is someone who might be the best player in the country. Fournette could wind up winning the Heisman Trophy and getting drafted No. 1 overall in 2017. But before he does that, he’ll begin his encore season with hopes of dismantling the Wisconsin defense like Derrick Henry did in last year’s season opener. Vince Biegel said Fournette compared to great B1G backs like Melvin Gordon and Ezekiel Elliott. Fournette might be a different species altogether.