Betting Stuff: How you can win big during the Big Ten Tournament

Before you throw down a wager on the Big Ten Tournament, which starts Wednesday night, it pays to know your history and how these 14 teams are playing at the moment. Here’s a quick primer to get you started.

How did they perform against the spread in conference play?

Does it pay to be the favorite? 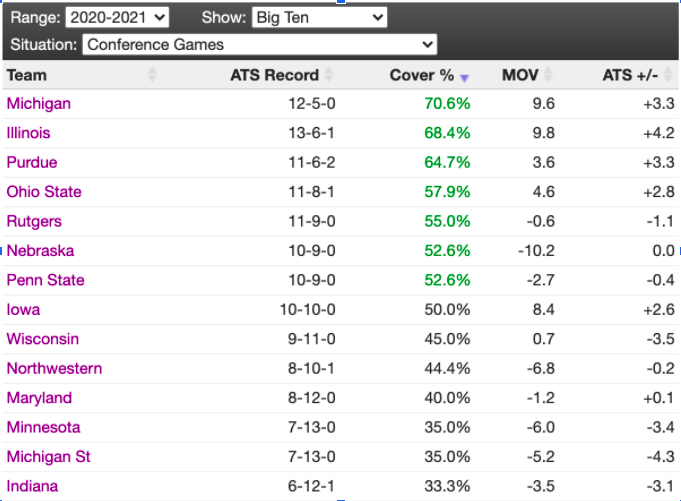 Since the Big Ten got into the postseason tournament business in 1998, this event has been more than friendly to chalk. Out of 22 attempts, the top seed has cut down the nets 9 times (41%). The only major conference tournament with more top-seeded champions since 1998 is the ACC with 10 in 22 years. Suffice to say, you could do a lot worse than blindly backing Michigan in Indy this week.

In fact, if you just bet the favorite to win the Big Ten Tournament every year since its inception, you would have a +35% ROI.

But Michigan has hit a skid in recent weeks. The Wolverines, once in the discussion for the No. 1 overall seed in the Big Dance, have now lost 2 of their last 3, including an embarrassing 6-point defeat to Michigan State, which entered the game 8-11 in Big Ten play.

The main issue for Juwan Howard’s squad has been their shooting stroke. The Wolverines spent the vast majority of the season inside the top 15 in shooting efficiency and remain lethal from long range (38.6%, 11th). But in their losses to Illinois and Michigan State, UM shot just 38% from the field and 31% from deep.

The Illinois game was shocking, in that the Fighting Illini completely clamped down on the Wolverines, holding Livers and Dickinson to 3-for-15 shooting from the floor. But after nearly three months of perfect basketball, an off-game can be forgiven. The Michigan State loss came after the Wolverines had clinched the Big Ten regular-season title and after their chance to nab the committee’s No. 1 overall seed in the NCAA Tournament had gone up in smoke.

At +175, I’m passing on Michigan and will instead be playing them in the first half of their first game ATS. I think they’ll come out motivated to get back on track. If they prove that the past week or so was an aberration in a quarterfinals blowout, I’ll consider a “rolling moneyline” strategy between the semis and championship game.

The Hawkeyes will continue to be on the most difficult teams to nail down from a predictive perspective. They have the offensive pop to beat any team in the country and can run away from average teams with ease. They also have the kind of defense that could get them bounced from the NCAA Tournament in the Round of 64. Just have a look at these stats:

Much like the Big Dance, I could see Iowa laying an egg against Wisconsin or Penn State in the quarterfinals or catching fire and winning shootouts over Illinois and Michigan en route to the program’s first Big Ten conference tournament title since 2006. So this comes down to the value presented at north of 4:1. Of the top 8 teams in the AP Top 25, only Iowa is above +400 (DraftKings) to win their conference tournament. For a team that has won 7 of its last 8 with a bonafide Wooden Award candidate as their centerpiece, that’s simply too much value to pass up.

The Buckeyes ran into a top-10 buzzsaw to end the year. Ohio State dropped 4 games to end its regular season campaign, with 3 coming against AP Top Ten opponents. But despite their recent skid, the bracket actually sets up nicely to get things rolling once again. They’ll face Northwestern or Minnesota in the second round before catching a Purdue team that has never been very good in this tournament. Under Matt Painter, the Boilermakers are 11-13 SU in the Big Ten Tournament and a dreadful 9-15 (37.5%) ATS. After that it could be a rematch with Michigan, who you would think, based on the media love, beat the Buckeyes going away last month, when in fact Ohio State actually put up 87 points and only lost by two possessions.

Given the lucrative odds and Ohio State’s proven ceiling, I’ll be playing the Buckeyes. But it bears mentioning that there is an elephant in the room when it comes to a potential run in Indianapolis. Chris Holtmann, for all of his wonderful coaching over the years, is an astonishing 1-5 in conference tournament games dating back to his time at Butler. Not a great look.

Penn State, the 11th seed in this year’s tournament, would need a miracle to make the final, but a trip to the semis isn’t as crazy as it sounds for Jim Ferry and company. Let’s start by analyzing the Nittany Lions’ road.

They open in the first round against Nebraska, a team they split with on the year. The Cornhuskers have lost seven of their last nine games straight up and are one of worst defensive teams in major college basketball. Should PSU best Nebraska, they’d draw a Wisconsin team it beat by 10 in Happy Valley.

While not quite as extreme as Nebraska, the Badgers are mired in a losing streak of their own, having dropped 6-of-8. Sensing a theme here? If you can score a win over Nebraska and an upset of Wisconsin, which the Nitts have proven capable of beating this season, you’re holding a valuable future at 100-1.

Hedging then becomes pretty straightforward against a Luka Garza-led Iowa squad. I won’t take this line of thinking much further and mention that Penn State was tied with Iowa with nine to play in Iowa City. That would be taking this dream too far, but you don’t have to squint to see a few of these Big Ten squads falling on their keys against a PSU team that has won three of its last four and has proven highly capable against Michigan, Wisconsin, Iowa and Ohio State this season.