Twenty bold predictions for the B1G in the 2016 NFL draft

That means we’ll finally get answers to all of the mock draft, big board, draft interview hoopla that’s been dominating headlines for the last three months.

I took my best stab at answering some of those B1G questions with bold (and a couple not-so-bold) predictions:

My thinking — There was once a thought that Collins would be a first-round pick. But after a less productive junior year his stock seems to be falling in a deep defensive tackle draft while Lewis’ stock is rising. After talking to NFL front offices, both Mel Kiper Jr. and Todd McShay believe Lewis could be one of the Day-2 surprises.

2. Joe Schobert is the second B1G linebacker off the board

My thinking — Speaking of risers, Schobert appears to be in that category. After Darron Lee, many expect fellow Buckeye Josh Perry to be the next linebacker off the board. But I think somebody goes after the former walk-on after his All-American senior season.

3. No conference has more players picked in the first three rounds than the B1G

My thinking — The more I think about it, I just think a ton of B1G players get picked in the first two days, especially in the third round. Connor Cook, Christian Hackenberg, Austin Johnson, Carl Nassib, Vonn Bell, Braxton Miller, Shilique Calhoun, Sean Davis, Jason Spriggs, Jihad Ward…the list is a long one. I don’t think the B1G has quite the first round that the SEC does, but I think that changes by the end of Day 2.

4. Mike Thomas gets picked by the Cincinnati Bengals in the first round

My thinking — I already wrote last week that I thought the Bengals were higher on Thomas than mock drafters realize. I’m sticking with that prediction.

5. The B1G’s top three QB prospects are off the board by the end of Day 2

My thinking — It would be surprising if Cook or Hackenberg wasn’t picked in the first three rounds. This is really about Cardale Jones. I think somebody takes a chance on him in the third round, which would be the best thing for him. Whether it’s Arizona or Pittsburgh, I think Jones ends up in an ideal situation and he doesn’t have to wait until Day 3. 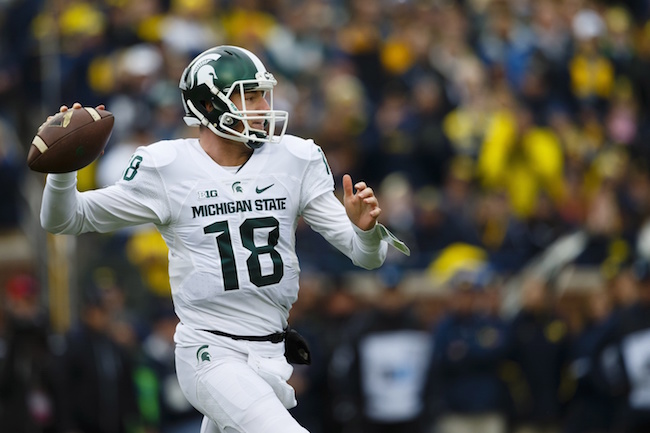 6. But none of them are taken in the first round

My thinking — The hope that either Cook or Hackenberg will end the B1G’s 21-year drought without a first-round quarterback. That could still happen, but I think quarterback-needing teams trade back instead of rolling the dice in the first round. I both think Cook and Hackenberg go off the board early in the second round, but unfortunately, the streak lives.

7. Jack Conklin doesn’t make it out of the top 10, making him highest pick of Mark Dantonio era

My thinking — Last year, Trae Waynes went No. 11 and became the highest selection ever in the Dantonio era. This year, I think Conklin tops that. Whether it’s San Francisco at No. 7, Tampa Bay at No. 9 or the New York Giants at No. 10, I think one of those teams takes a guy some feel is the safest pick in the entire draft.

8. Sean Davis gets picked late in the second round

My thinking — If there’s a guy worth taking a chance on, it’s a physical freak who can play multiple positions. That’s Davis. Even though he wasn’t as good at corner as he was at safety following his senior-year switch, Davis still was one of the most impressive DBs at the combine and the experts were impressed with his tape.

9. Ezekiel Elliott doesn’t get out of the top four

My thinking — Maybe this isn’t so bold anymore. Many have Elliott going No. 4 to the Cowboys and being this year’s version of Todd Gurley. But don’t rule out a possible trade from Miami, which sits at No. 13 and is high on Elliott. If this draft has shown us anything so far, it’s that top-flight skill players are at a premium and there are teams willing to sell the farm to get them. 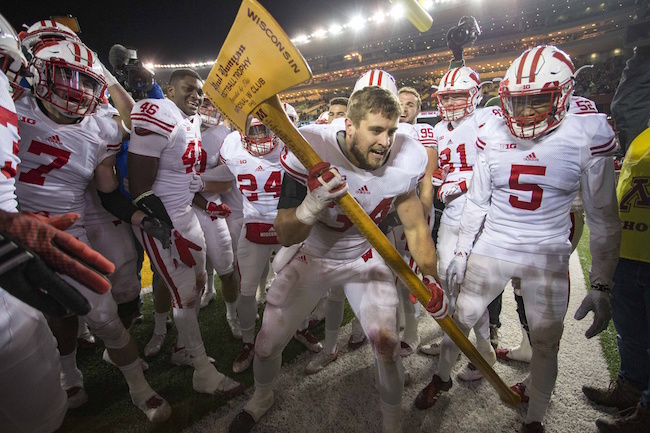 10. Fullbacks Dan Vitale and Derek Watt both get drafted

My thinking — I’ve been saying all along that Vitale, who led Northwestern in receiving yards, needs to be drafted. I think in today’s NFL, he’ll find a home on Saturday. I also think that Watt’s name will make him an intriguing late-round pick. That, coupled with the job he did with Wisconsin’s offensive line in constant flux in 2015, will cause one team to pull the trigger.

My thinking — Call it the “Harbaugh Effect” if you must, but there’s something to be said for having that guy in your corner. Rudock played his best football in the second half, he lit up Florida’s talented secondary and he was apparently impressive at his pro day. In a quarterback league, Rudock has too many things working in his favor not to get drafted.

12. Somehow, Joey Bosa falls out of the top six

My thinking — It amazes me that Bosa is no longer a consensus top-five player. People like to bring up his decline in sacks, yet a lot of those same people slot Jalen Ramsey and his three career interceptions ahead of Bosa. Someone will see an elite-level pass-rusher and realize that he can succeed in any scheme. But based on the market, I have a hunch that doesn’t happen in the first six picks.

13. Briean Boddy-Calhoun makes someone very happy in the seventh round

My thinking — The need for a 5-9 cornerback isn’t dire. But Boddy-Calhoun has the ball skills to warrant a late-round selection. When healthy, his few defensive backs put up the numbers he did. Perhaps a team that played just down the road scoops up the Gopher star on the final day.

My thinking — The freakish defensive lineman will appeal to someone in the second round. Amazingly, he’ll be the first Illini player selected since 2013. I think he gets picked ahead of the likes of Collins, Lewis and Schobert, none of whom are projected as first-rounders. Perhaps this isn’t bold at all.

15. Jason Spriggs isn’t picked until late in the second round

My thinking — If the draft was based on the combine and the pro day, Spriggs might be a top-five pick. He has that kind of athleticism. But there are questions about how well he can handle elite pass-rushers and whether or not he has the footwork of an NFL offensive lineman. Teams picking offensive linemen that high like plug-and-play guys, which Spriggs doesn’t appear to be quite yet. 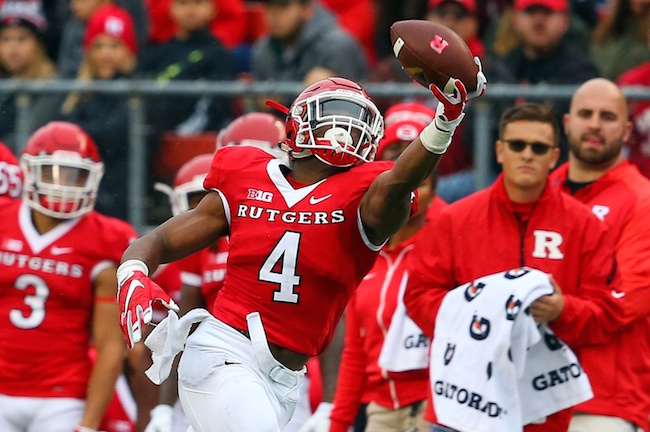 My thinking — Watching them this year, you’d think it was crazy to have both guys falling out of the first three rounds. Both were lethal, consistent threats who could catch passes all over the field. They might not have the size or top-end speed of receivers typically selected early, which is what will likely hurt them. But whoever winds up with one of these two guys is getting a bargain.

17. For the second time in 47 years, Nebraska doesn’t have three players drafted

My thinking — I already expressed my opinions on Collins and Lewis, both of whom figure to be off the board by the end of Day 2. But other than that, I don’t think a Husker comes off the board. Valentine is still viewed as raw and in an injury-riddled 2015 season, he doesn’t have much production to fall back on. Janovich, by the virtue of the position he plays and his late emergence, projects more as a free-agent signing. I do think both sign free-agent deals, along with cornerback Daniel Davie. Still, the Huskers’ NFL draft presence is a limited one.

My thinking — I wrote a while back about why Fejedelem’s pro-day showing proved why he was a combine snub. Couple that with the fact that he’s a sure-tackler and I can’t imagine someone finding a spot for him.

My thinking — I understand that the NFL isn’t a charity league, and nobody is going to cut any breaks for Ott. But I have a gut feeling that in spite of the fact that he was on the NCAA’s back burner for far too long, somebody picks up the Iowa defensive end. Don’t forget that Ott has the size, toughness and production that front offices covet. Somebody remembers that and Ott gets drafted after all.

20. Every B1G team has a player drafted and the B1G has most players picked since seven-round draft started in 1994

My thinking — Ok, that’s two things. Purdue, which has an 18-year draft streak intact, is the biggest threat to that happening. But the speedy Anthony Brown keeps the streak alive. He also helps the B1G best a mark that stood for the last 12 years. This year, the B1G tops the 44 players it had selected in 2004, which was the most since the draft was reduced to seven rounds in 1994. Based on what I’ve seen from seven-round mocks and my own digging, it wouldn’t be surprising to see 50 B1G players off the board. And who said the B1G lacked next-level talent?