Anybody can predict chalk.

I always question the people who fill out an NCAA Tournament bracket and pick a Final Four full of No. 1 seeds. What’s the fun in that?

It’s a little more fun to go out on a limb. At the root of every one these 20 bold predictions is an educated reason. I promise.

1. Trace McSorley accounts for 3,200 yards from scrimmage and 25 touchdowns

I’m sorry if you’re sick of reading this. I think McSorley is C.J. Beathard 2.0. He might operate in a different system, but I think after the snap, he bursts onto the scene showing a lot of the dual-threat ability that made Beathard great in 2015.

Lovie Smith repeatedly said that Vaughn will be the guy. He brought the true sophomore to B1G Media Days and told us about how confident he was in Vaughn to dominate the workload. Without the injured Dre Brown, he’ll have to. Predicting that an Illinois running back will finish with more carries than Justin Jackson qualifies as bold.

Speaking of running backs with injured backups, Jones stepped into an even more prominent role when DJ Knox went down with a season-ending knee injury. I hyped Jones a lot heading into his freshman year, and after seeing him rush for 5.2 yards per carry and 10 touchdowns, I’m doubling down.

4. Neither or Michigan or Iowa are undefeated when they meet

This isn’t my way of saying Michigan and Iowa will underachieve. Both could easily wind up playing in the B1G Championship. But I don’t buy that either team will get through their first nine games unblemished. Keep in mind that before their November showdown, Iowa hosts Wisconsin and travels to Penn State while Michigan travels to Michigan State. Sure they have talented teams with favorable schedules, but 9-0 is not an easy thing to do. 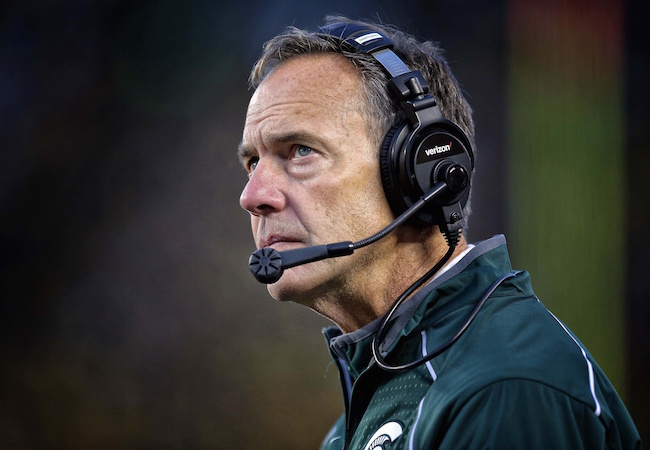 5. Michigan State DOESN’T get swept by Michigan and Ohio State

I’ve learned that betting against Mark Dantonio vs. Michigan and Ohio State is silly. He’s 5-1 against those two teams in the last three years and he gets both of them at home this year. Dantonio ain’t dropping both.

6. Bart Houston doesn’t start all 12 games, but he stays healthy all year

For the record, I think starting Houston was the right decision to make given Wisconsin’s early schedule. But I think Alex Hornibrook gets a shot to start a game if and when Houston struggles against a weaker B1G foe. I think Paul Chryst gets the itch to see what he has in his quarterback of the future and gives him more than just garbage time work.

7. Desmond King’s interceptions are cut in half, but he still earns All-America honors

Some quarterbacks will still throw at King. They shouldn’t, but they will. King will be at the top of every scouting report, and he could get the Vernon Hargreaves III treatment. His numbers might not be as good as other corners, but he’ll impact the game by shrinking the field for Iowa and be just as valuable as he was a season ago.

8. J.T. Barrett gets a trip to the Heisman Trophy ceremony

Regardless of whether or not Ohio State takes a step back, I see Barrett taking a step forward. Or a step back to his 2014 season that saw him score a B1G-record 45 touchdowns. He might not hit that total, but he reminds everyone that he’s still capable of being one of the top quarterbacks in the country. Who will he be joined by? I’ll take DeShaun Watson, Christian McCaffrey and Leonard Fournette. Ok, maybe that’s not bold.

9. Rutgers is the B1G’s most improved defensive team

Rugby. Style. Tackling. Learn it, love it, live it.

10. Wisconsin wins at least one game against either LSU, MSU, Michigan or OSU

Can you picture the Badgers starting off 2-5? Neither can I. Somehow, Wisconsin finds a way to go into the Iowa game with three wins. Corey Clement will go off for three touchdowns and 200-plus yards and Wisconsin’s defense will put together a performance that Dave Aranda would be proud of. That happens in one of those four games.

Nate Sudfeld’s replacement will follow in his footsteps. Lagow has three proven receivers in Simmie Cobbs, Ricky Jones and Mitchell Paige, he has tailbacks that can catch passes, and he has one of the better offensive lines in the country. Add that up and you get another 3,000-yard passer in Bloomington. 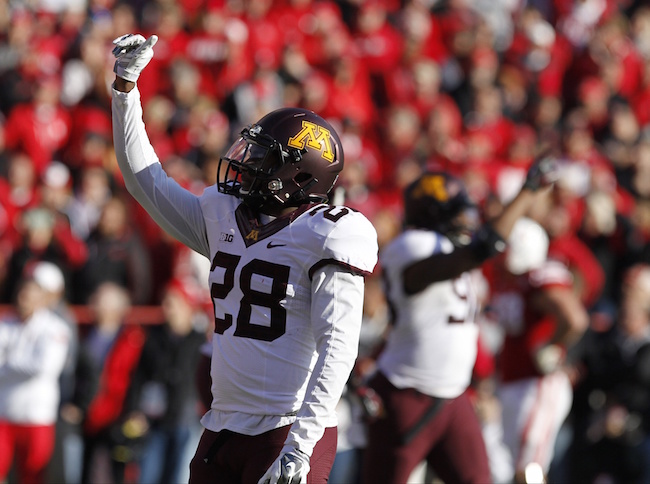 12. Jalen Myrick leads the B1G in interceptions and pick-sixes

I’m eager to see what Myrick can do in a full season as a starter. Without Briean Boddy-Calhoun and Eric Murray, Myrick will have a chance to shine in a Gopher secondary that quietly established itself as one of the nation’s best. He already has four interceptions and two pick-sixes two his credit. Both of those will grow significantly in 2016.

13. Freedom Akinmoladun and Kemoko Turay each finish with double-digit sacks

I feel like I’ve been waiting for both of these guys to break out for the last four years. It hasn’t been that long, but both are now veterans who aren’t raw pass-rushers. Akinmoladun had five sacks before getting hurt against Illinois in the B1G opener. I expect he and Turay to put it all together and become the pass-rushing menaces they were hyped up to be.

Sean Davis, Yannick Ngakoue and Quinton Jefferson are gone. Carter is not. I see Carter having a very Steve Longa-like season for the Terps. Riley Bullough and Raekwon McMillan are obvious candidates to lead the conference in tackles, but I think Carter has more responsibility on his plate as the leader of that defense. He’ll be everywhere.

15. Illinois, Northwestern, Rutgers and Purdue all fail to win a road game

Ok, that’s not that bold for Illinois, Rutgers and Purdue. But it is for Northwestern, which went 3-1 away from Evanston last year. This year, Northwestern has road games at Iowa, Michigan State, Ohio State, Purdue and Minnesota. Yes, I’m predicting Purdue will win a B1G game. We’re getting REAL bold. 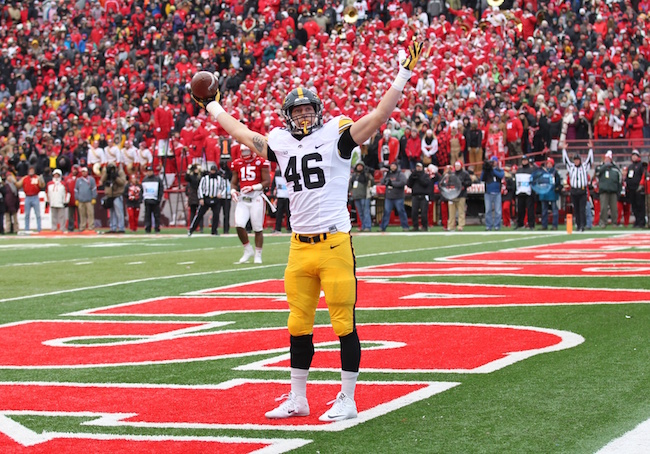 Dallas Clark had eight and Tony Moeaki had 11. Career touchdowns, that is. Kittle might not be quite as talented as them, but there’s a reason he’ll have a historic season. NOBODY COVERS GEORGE KITTLE.

17. Maryland cuts its turnovers in half

Nobody turned the ball over more than the Terps last year. A whopping 36 turnovers is an average of three per game (math). Walt Bell’s offense won’t put Perry Hills in as many positions to make poor decisions. Hopefully.

Hey, most publications have him finishing as a second-teamer. I’m taking the over. After all, he’s a superhero.

19. The only true freshman B1G tailback to run for 500 yards is Miles Sanders

Saying that Sanders will make an impact isn’t bold. The five-star true freshman was the top tailback recruit in the country. More bold is the prediction that only one B1G true freshman will hit 500 yards. Last year, LJ Scott, Shannon Brooks, Markell Jones, Saquon Barkley and Ke’Shawn Vaughn all did it. Ironically, I’m picking the guy who will back up the league’s top tailback. Just as Barkley did last year, Sanders is sure to make some jaw-dropping plays of his own.

Yes, saying “the nation’s winningest football team” will win a conference title is bold. I don’t, however, think the Wolverines run the table en route to the College Football Playoff. Either Iowa, MSU or OSU will trip up Michigan. There could still be a few off games here and there for whoever starts at quarterback. But this defense might wind up being the nation’s best. There are going to be plenty more moments that resemble the three-game shutout stretch from a year ago. Finally, the Wolverines get a conference crown and compete for a national title.

Connor O'Gara
Connor O'Gara is the senior national columnist for Saturday Tradition. He's a member of the Football Writers Association of America. After spending his entire life living in B1G country, he moved to the South in 2015.
RECENT ARTICLES
BIG TEN
NFL Draft: Which B1G first-rounder will have the best rookie season?
BIG TEN
Purdue's George Karlaftis first B1G player off the board, 4 Buckeyes projected as first-round picks in way-too-early mock draft from CBS Sports
BIG TEN
How the B1G 2022 recruiting rankings look at the beginning of May
BIG TEN
Latest odds released for 2022 college football national champion