Fans usually have a tendency to freak out when it comes to over-under regular season win totals.

They see that an oddsmaker has their team slotted for eight wins, and they play the disrespect card. What they often forget is that these odds are just for regular season wins. That obviously means conference championships and bowl games don’t count.

This week, Bovada came out with over-unders for nine B1G teams. For whatever reason, Illinois, Maryland, Minnesota, Purdue and Rutgers were not included.

But nine B1G teams were included, so I broke down where I’d put my money if I were a betting man.

First-year head coach, B1G East schedule, road non-conference game vs. a Power Five team…none of these things suggest IU will have its highest regular season win total in a decade. That’s what getting to seven wins would entail. The Hoosiers would have to not only win at Virginia, they’d have to pull off an upset or two. Six wins is a fair mark, but the odds of hitting the under seem far greater.

The Hawkeyes have a few things working in their favor. They have a favorable non-conference slate (but don’t sleep on that Wyoming game), six B1G West matchups and key pieces returning on both side of the ball. It’s always dangerous to bet the over on a team with a first-year starter at quarterback. Still, it’s hard not to like the thought of Akrum Wadley returning with virtually the entire offensive line. Seven wins should be the floor for this group. 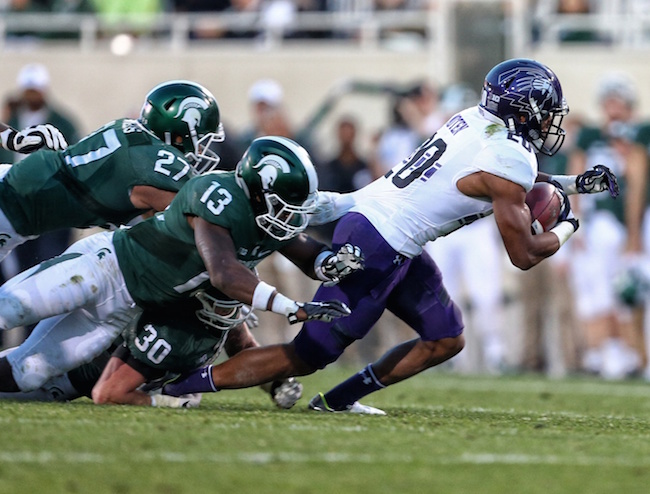 Call me crazy, but I think it’s ambitious to assume a three-win team will more than double its regular season win total after the offseason MSU has had so far. Keep in mind that the Spartans still could lose multiple key players depending on the outcome of the ongoing sexual assault investigation. This is also a team that lost the likes of Malik McDowell, Riley Bullough, Montae Nicholson, Demetrious Cox and Jon Reschke from that defense. Combine that with the fact that MSU has a non-conference game against Notre Dame and a loaded B1G East schedule, I’m not banking on seven wins.

For the record, I’d probably slot the Cats for seven wins. But the better bet is the over, and here’s why. Northwestern has the type of schedule that could easily yield nine wins without making a lot of noise. Besides not having a headliner non-conference game — the road matchup vs. Duke could be a toss-up — the Cats don’t have a second-half matchup against any teams that had double digit wins last year. The Cats’ two toughest games on the schedule — vs. Penn State and at Wisconsin — were actually both matchups that they won during that 10-win season in 2015. With Justin Jackson and Clayton Thorson back, eight wins for Northwestern is worth the gamble.

Don’t get me wrong. I think there’s a decent chance Nebraska wins nine games again, but I like the odds of the under better. Nebraska will likely be an underdog at Oregon, vs. Wisconsin, vs. Ohio State and at Penn State. That means best-case scenario, the Huskers are favored in eight games. Three of those would be at Minnesota, vs. Northwestern and vs. Iowa, all of which could prove to be challenging. With a new-look offense, I’m not assuming the Huskers cruise to eight wins. You can bet the oddsmakers are curious to catch a glimpse of Bob Diaco’s defense, though. 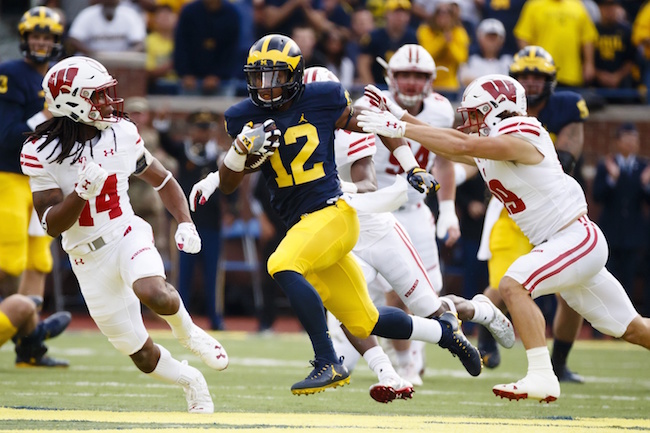 For what it’s worth, I’d be staying far away from this one. But these are about odds. Would you bet on the Wolverines to win eight games or 10? I’m going with the latter. Yes, there are question marks galore. Who will become Michigan’s pass-catchers? Can the offensive line, which has multiple holes to fill, improve after struggling mightily against quality opponents? How can that defense possibly play at the level it did last year having lost all but one starter? This is a gut call, but I think Jim Harbaugh and Don Brown find a way to answer those questions and stay in the ever-competitive B1G East race.

Remember Wisconsin’s loaded schedule that was supposed to yield six wins last year? It produced 10 regular-season wins. This year, the Badgers have a much more favorable slate. Wisconsin could wind up being favored in every single regular season game. Yes, that includes the home showdown vs. Michigan. Don’t get it twisted. That trip to BYU won’t be a picnic, and neither will the game in Lincoln. But the Badgers are loaded up front, they still have veterans galore on defense, Alex Hornibrook should take a big next step and they have two of the better weapons in the country in Jazz Peavy and Troy Fumagalli. Bank on another season of 10-plus regular season wins. 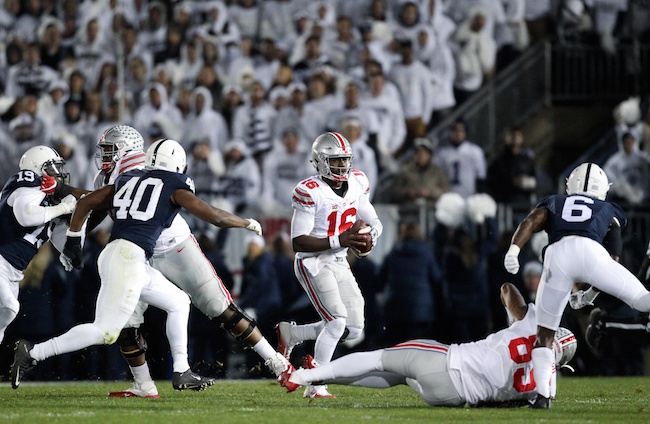 The Lions might be a scary bet for some who are still convinced they just played out of their minds for two months last year. There’s no guarantee Penn State repeats that type of offensive blitzkrieg, but 10 wins doesn’t seem far-fetched for a team that returns as much talent as the Lions. The early projections show that Penn State might only be the underdog in one game, which is the showdown in Columbus. Barring a major injury — Saquon Barkley and Trace McSorley actually have pretty talented backups — Penn State should be able to at least match last year’s regular-season win total.

You’re right. Allowing a team to only lose one regular season game seems like very little margin for error. It is But you know what Urban Meyer did in each of his first five seasons at Ohio State? He won at least 11 regular season games. That included when his team was banned from the postseason in 2012 and last year when he had the youngest team in America. This team isn’t facing an obstacle like that, and it looks plenty talented. Yes, the schedule is difficult. Ohio State would have to win at least two of three matchups — only if they win the other nine, of course — vs. Oklahoma, vs. Penn State and at Michigan. Daunting it is, but the Buckeyes don’t look like a team on the verge of their worst regular season under Meyer.