College Football Playoff picks are getting updated coming out of Week 11 with ESPN’s panel of college football experts revealing their latest projections. The list of true contenders is also starting to narrow with some would-be contenders falling by the wayside over the weekend.

The biggest loss of the weekend came from Oregon with the Ducks upset at home by Washington. Previously the No. 6 team in the country, Oregon was trending toward a potential Playoff birth as a one-loss team.

Ole Miss also fell out of the top 10 with a loss to Alabama while LSU made a jump as a 2-loss program.

Coming out of Week 11, ESPN’s group of experts included just 5 teams on their ballots for the Playoff. Georgia, Ohio State and TCU were all unanimous selections on all 15 ballots.

The fourth and final spot was split between Michigan and Tennessee, though the majority of ESPN personalities went with Michigan. The Wolverines received 14 of the 15 votes while the Vols landed on just one ballot.

It will be interesting to see how these projections hold up if these 5 teams run the table into the final weekend of the season. Then, Ohio State and Michigan will face off in The Game with one of the teams guaranteed to lose.

Here are the full ballots from ESPN: 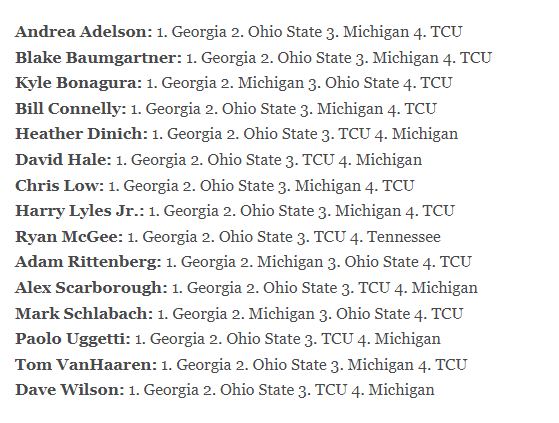