Everything you might've missed from Day 2 at B1G Media Days...and more

CHICAGO — B1G Media Days are officially in the books.

But not without some interesting nuggets from the final day. And yes, there was more to talk about than negative recruiting.

We got to hear about a variety of topics, from Jim Delany’s future retirement to Kirk Ferentz’s lone movie seen since the bowl game. There were plenty of takeaways from Tuesday in Chicago.

Here were some interesting nuggets you might’ve missed:

Many feel that the B1G is unbalanced. They would argue that the East is loaded and the West, well, isn’t.

The problem was that when the B1G decided to abolish the Legends and Leaders and switch to geographical divisions, it led to an imbalance. B1G Commissioner Jim Delany was asked about the possibility of making changes that would restore some competitive balance.

“I don’t expect that to change in the short term,” Delany said. “And could it change? The word ever is a long word and could it ever change? I guess there could be a discussion, but there’s no present discussion to make that change.”

In other words, the B1G warned that could happen when it made the decision to shift the divisions. Now, the problem they foresaw years ago is happening.

But if Michigan, Michigan State and Ohio State remain national powers, the conference might have no choice but to realign. Like the SEC West, which has the likes of Alabama, LSU and Ole Miss, some would argue there are three better programs in one division than the other.

-Michael Jordan will start in more places than Michigan

That’s a weird way of saying that Ohio State’s Michael Jordan is expected to start at tackle as a true freshman this year. Urban Meyer said he expects that to be the case, assuming he doesn’t have any setbacks in fall camp.

“Michael Jordan is probably going to be — a true freshman — will be in the starting lineup,” Meyer said. “What I’ve seen from, his development since he got here in January is outstanding.”

That’s been suspected for awhile. The 6-6, 305-pound freshman was the No. 14 tackle in the 2016 class. He’ll get a chance to block for fellow Michigan native and freshman Mike Weber. Meyer announced on Tuesday that he’ll likely be at the top of the depth chart on Day 1.

Though talented, that’s another sign of how young the Buckeyes are heading into 2016. 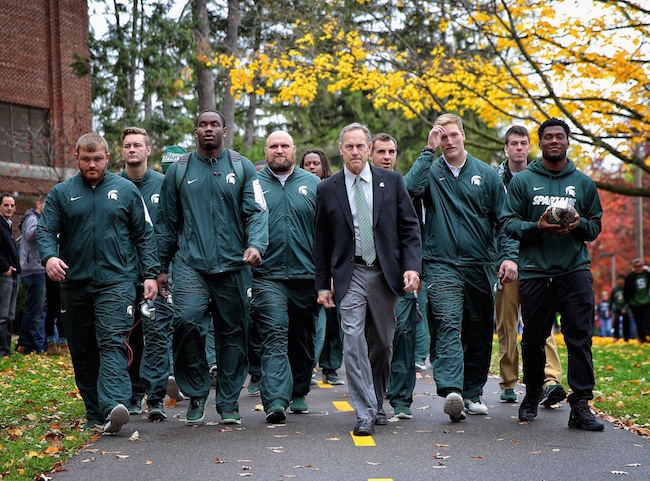 The B1G announced on Tuesday that it’ll have some new programming in the works in the start of the 2016 season. Last year, the network aired the highly successful Scarlet and Gray Days: Inside Ohio State Training Camp.

This year, the Hard Knocks-like show will travel to East Lansing for Green and White Days: Inside Michigan State Training Camp. Michigan State won’t be an overwhelming national title favorite like the Buckeyes were, but there should still be plenty of interest in the documentary-style mini series.

Also added to the Big Ten Network slate was a new pregame show that will resemble ESPN’s College GameDay. Big Ten Tailgate will travel to a new B1G school each week, and host a 90-minute pregame show.

For the first time, Big Ten Network will have a late-night program during the week. Sports Lite with Mike Hall will offer a coast-to-coast take on all things B1G. The show will debut on Wednesday, Sept. 14 at 11 p.m. ET.

Hall said he hopes it has a “Tonight Show with Jimmy Fallon” feel to it.

Get your Big Ten Network subscriptions back, cord-cutters. 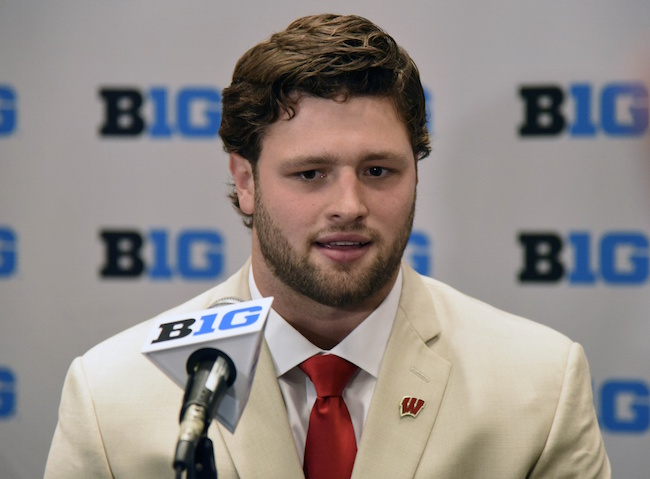 -Vince Biegel will be ready for Leonard Fournette, mullet and all

It’s easy to lose track of it. The Badgers are playing at Lambeau Field, they’re taking on their old coordinator and they’re playing a likely preseason top-10 team.

Vince Biegel and the Wisconsin defense hasn’t lost sight of that. In fact, the Badgers have already watched film on Fournette.

But they don’t consider it an unprecedented challenge.

“(Fournette)’s a big-time playmaker, just like Ezekiel Elliott, just like (Gordon),” Biegel said. “Those three guys are guys I found to be similar and they’re all big-time running backs playing at high levels.”

RELATED: Rafael Gaglianone to honor Sam Foltz by wearing his number in 2016

Biegel said there’s something else he’s working on being ready for the highly anticipated season opener. His mullet is in offseason form right now:

“As you can see, there’s no mullet in there right now,” Biegel said. “But the mullet will be in full flow come fall camp and as we progress to LSU.”

We can only hope.

-Maryland shares strong opinions about ridding of kickoffs in college

There might not be a better kick returner in the B1G than Will Likely. The explosive senior figures to return his fair share of kicks to the house in 2016.

So when he heard about the possibility of kickoffs being eliminated across college football, he wasn’t a fan.

“It would take the fun out of the game,” Likely said. “It’s not really football anymore. You might as well just play seven-on-seven.”

Maryland linebacker Jermaine Carter has played special teams his entire career, and even though he’s the team’s leading tackler, he plans on doing so again.

He also thought eliminating kickoffs would change the game significantly.

“My reaction is they’re crazy,” Carter said. “I think they’re cutting the hard-hitting out of football.”

Their coach wasn’t a fan of removing the physicality of the play, either.

“I’d rather not see that happen,” Maryland coach D.J. Durkin said. “I think it’s an exciting, fun part of that game. It’s a place where you can really gain an edge in a game.”

Durkin maintained that he’s all for player safety, but he feels players are as safe as they’ve ever been.

If there is a rule change, he wants to see legitimate evidence, not just a few loud voices in the room.

“Far too many times, the rule changes…where the come from, where the berth of these rule changes is initiated, I question that some times,” Durkin said. “Is there proper understanding or is it knee-jerk reaction?”

Luckily, no change will happen in 2016. So fear not, Maryland fans. This can still happen:

Lovie Smith has been asked about recruiting more times than he can probably count. Part of that task, he knows, is dominating Chicago and owning one of the nation’s biggest media markets.

So how did Smith close his opening statement at his first B1G Media Days?

“We feel like we’re Chicago’s team, and also we have a lot of alumni here so it’s good to be here,” Smith said.

Sure, he wants to dominate in his home state of Texas and he wants to capitalizes on the relatively untapped St. Louis market. But the former Chicago Bears coach knows how important the area is in sustaining success.

“In order for us to do well we need to do well in the Chicago area,” Smith said. “And why wouldn’t you want to do well? A lot of great athletes here.”

Wake up, #ILLINI! It's a beautiful and big day in OUR CITY! #WeWillWin pic.twitter.com/6y6n8MPg7Q

Pat Fitzgerald and the Northwestern marketing staff might have a thing or two to say about that.

Wilson was in his usual, shoot-from-the-hip-at-100-miles-per-hour-self mood on Tuesday. With that, Wilson admitted one of the major benefits of signing a deal that will keep him in Bloomington through 2021.

“So I think the one thing that’s helped our recruiting the most has been the contract extension because a year ago, I don’t know if we were getting that,” Wilson said. “I think a lot of kids, like, hey, what’s going to be the offense? Who’s going to be your coach?

“I think right now, with the six year extension, I think you got a lot of guys buying the fact that we got a chance to be successful.”

Wilson also admitted that he really wasn’t fired up about a lot of the early commitments in his 2016 class because relationships weren’t established yet, but that some of the more recent ones have been more rewarding. IU did just land a commitment from Juan Harris, who has decommitted from Iowa three different times.

IU still only has the 11th-ranked class in the B1G, but with Wilson building off more offseason momentum than he’s ever had, that number could easily rise. 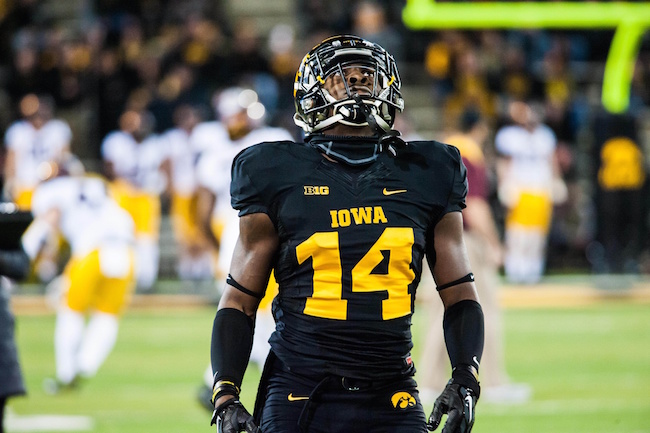 Iowa fans were on the edge of their seats waiting on a decision from Desmond King in January. Would the Jim Thorpe Award winner return to school for another year? Or would he leave for the NFL?

King obviously elected to come back to Iowa instead of being picked in the first couple rounds of the NFL draft. It seemed split down the middle until King finally announced his intentions.

But according to Ferentz, it wasn’t a back-and-forth decision.

“I personally don’t think it’s tough at all,” Ferentz said of King’s diliemma. “And I told Desmond basically the same thing I told Brandon Scherff. From my vantage point there are few times in life where you get to do what you want to do. Not that you have to do or feel like you have to do.”

RELATED: Don’t be surprised when Kirk Ferentz gets yet another wealthy extension

Ferentz added that King had plenty of family support to return to school one more year and double down on his historic 2015 season. King said it wasn’t one specific thing that led to his return.

But he apparently didn’t sweat it as much as some might’ve assumed.

“And the bottom line is you only get to be a senior twice in your life as an athlete and those are really enjoyable, fulfilling years. And I think Desmond really appreciated that,” Ferentz said. “I think he’s excited about being back and also embracing the challenge of being a leader and being a better player than he was last year.”