B1G Commissioner Jim Delany said something on Wednesday that he’s likely said before, albeit with some different people in the room.

“You can be sure that those with great, great content will always — relatively speaking — be treated very well.”

Delany is selling one of the more valuable assets in all of sports, and it sounds like it. That became perfectly clear when reports surfaced that Fox was closing in on a six-year deal for half of the B1G’s television rights for a whopping $250 million annually. Compared to the 10-year, $1 billion deal with ESPN — the B1G is about to enter the final year of that — it’s a significant raise.

As Delany spoke about the matter, he sent a clear message to ESPN: You’re not getting any discount, and don’t think we need you to survive.

Sports Business Journal, who broke the Fox story, reported that the “Worldwide Leader” lowballed the B1G. It was considered somewhat surprising that ESPN, which has television deals with every Power Five conference, wouldn’t be the first ones to lock down such a critical piece of the college sports television pie.

Does anyone remember another time when ESPN lowballed Delany?

To recall that story, you’d have to go back to 2004. Delany met with ESPN, including executive vice president of programming and production Mark Shapiro, and he wanted to discuss an extension for their television rights deal. As Delany told the Chicago Tribune, it didn’t go very well:

“(Shapiro) lowballed us and said: ‘Take it or leave it. If you don’t take our offer, you are rolling the dice.’ I said: ‘Consider them rolled.'”

So that brings us back to the present day, where oddly enough, history could be repeating itself. Delany wouldn’t confirm the Sports Business Journal report that the B1G and Fox agreed on a new deal. Naturally, he was also asked about the possibility of leaving ESPN out of its new rights deal.

“I wouldn’t comment on something like that in this stage of any negotiation, I wouldn’t talk about walking away from anybody or walking toward anybody,” Delany said. “We’re interested in having great partners with great platforms who are interested in marketing and promotion. The market will decide what happens. ESPN has been a great partner, as has CBS has, as BTN has, as Fox has.

“It’s a new day. We’ve approached it that way. We’ll see what we shall see. But I wouldn’t talk about walking away from anybody in any negotiation.”

RELATED: Why Week 3 is most important weekend for B1G in a long time

Delany knows what he’s doing. He’s playing poker right now, as he should be. Everybody knows the price that Fox paid. That will serve as a starting point for his negotiations with ESPN.

There are some other things to consider in this matter that could complicate things on both sides. ESPN’s ratings were down 10 percent in 2015. Fox Sports 1 and NBC Sports Network, on the other hand, saw prime-time ratings rise 14 and 25 percent, respectively (awfulannouncing.com).

But ESPN still commands the highest monthly rate from pay-TV services ($6.64). Despite the chord-cutting movement, the network also saw an increase in ratings, thanks in large part to the rise of the WatchESPN app, which grew by 38 percent in 2015. 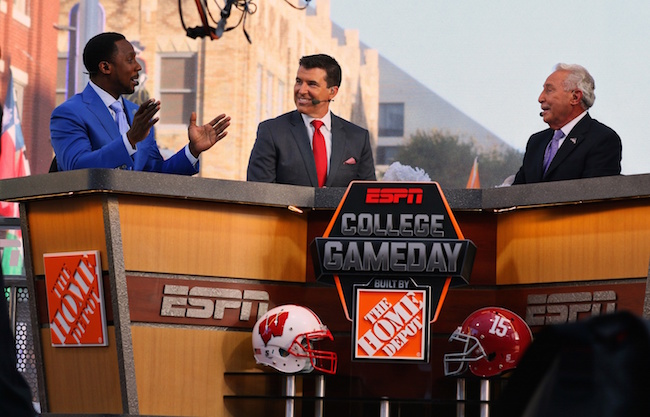 Another card in ESPN’s hand is College GameDay. What would happen if the B1G left ESPN out of its deal? Would that mean you wouldn’t see the ever-popular pregame show travel to B1G country?

That would be quite the roll of the dice for both ESPN and the B1G. Sure, Fox’s pregame show would be dominated by the B1G, but it doesn’t draw anywhere near the viewers that College GameDay does.

And what about the College Football Playoff? ESPN is in the beginning of a 12-year deal for those rights. As much as one would like to think that the powers that be would make all decisions with a fair, unbiased approach, the conspiracy theories would fly if a B1G team felt it was snubbed by the selection committee.

Parting ways with ESPN wouldn’t be without some major risk, even if the compensation from another network is too good to pass up.

“This isn’t pointing the finger at ESPN in any way, stating you have to or you don’t have to participate as a partner of the Big Ten,” Northwestern AD Jim Phillips said. “It’s more about ‘can the two groups come together?’ Not just ESPN, you have multiple other avenues that are really terrific potential possibilities for us in the Big Ten. … No one has amnesia about the relationship we’ve had with ESPN. John Skipper and that group is a great group, they’re terrific. They’ve been wonderful partners.

For things to get serious again, Delany wants ESPN to shell out the big bucks. The network didn’t do that 12 years ago, and it paid dearly for it. As a result, Delany became the most powerful man in college sports. Without going into any specifics, the B1G commissioner said exactly what he needed to say to ESPN on Wednesday.

He just wants to be treated very well.