Coming out of Championship Weekend, ESPN’s panel finally has a consensus across the board. Only four teams were featured on the 13 ballots with every analyst agreeing on the major items.

Across the board, defending national champion Georgia received 13 first-place votes with the Bulldogs widely expected to be the No. 1 seed on Sunday. Michigan — the only other 13-0 team in the country — is also the consensus No. 2 seed.

As for the 4th and final spot, the panel does not see any drama playing out on Sunday. All 13 ballots feature Ohio State as the No. 4 team in the country with Alabama left on the outside looking in for the Playoff. 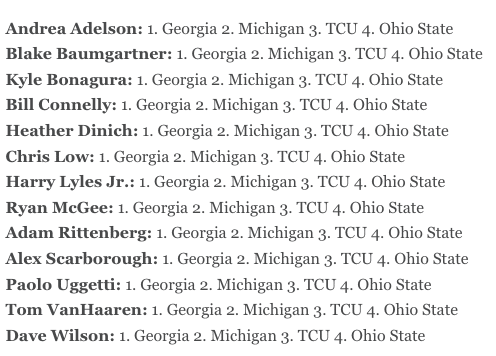 We’ll see if those projections hold true in just a little bit. Nick Saban has been campaigning hard for his Alabama team to make the Playoff — either over TCU or Ohio State — but it remains to be seen if Saban’s attempt has gained any traction within the Playoff committee.

ESPN will air the Playoff selection show Sunday at 12 pm ET. Stay tuned for the final Playoff field to be released.