ESPN’s panel of college football experts has updated their picks for the College Football Playoff field. After a crazy Week 7, the panel has a drastically different look heading toward Week 8.

Most notably, Alabama — previously a unanimous pick to make the CFP — has slid down the ballots. Tennessee upset the Tide on a last-second field goal Saturday, and the Vols now appear on all 13 ballots.

Georgia and Ohio State are also locked in as unanimous choices for the Playoff field. The Bulldogs cruised with a Week 7 matchup against Vanderbilt while the Buckeyes were idle for a bye week.

The No. 4 spot for the Playoff remains up in the air. The new leader for the No. 4 spot is Michigan, landing on 8 of the 13 ballots after a crushing win over Penn State. 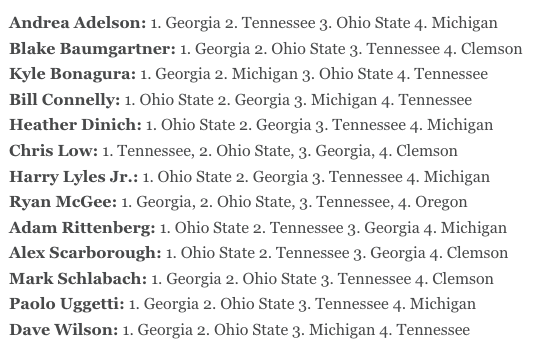 As things currently stand, Ohio State and Michigan appear on a collision course for The Game, and both teams stand a solid chance of making it to the regular-season finale undefeated.

As for the SEC, at least Georgia or Tennessee will take a blemish along the way. Those two teams have yet to face off in what will be a key matchup for the race to the Playoff.