At least two B1G teams will kick off the 2016 season in front of a national audience.

ESPN announced its schedule for a headliner-filled opening weekend of college football. Two of those games will feature B1G teams.

Michigan will begin its highly anticipated season against Hawaii on Saturday, Sept. 3 at noon ET on ESPN. Following that game on ABC at 3:30 p.m. ET will be the showdown between LSU and Wisconsin at Lambeau Field.

Here was the complete ESPN slate for the opening weekend, which is subject to change: 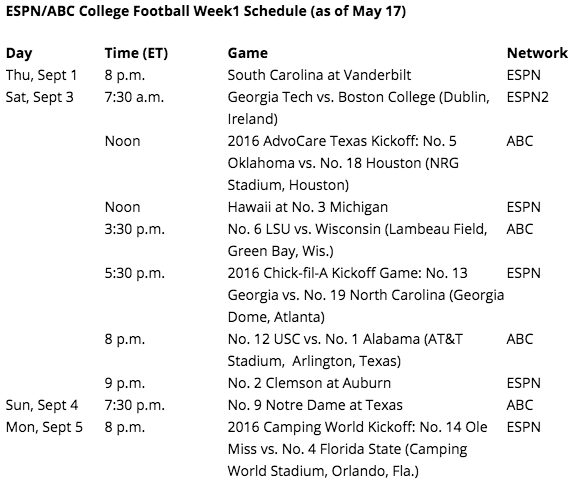 Additional ESPN games could be announced on a later date.

Connor O'Gara
Connor O'Gara is the senior national columnist for Saturday Tradition. He's a member of the Football Writers Association of America. After spending his entire life living in B1G country, he moved to the South in 2015.
RECENT ARTICLES
BIG TEN
NFL Draft: Which B1G first-rounder will have the best rookie season?
BIG TEN
Purdue's George Karlaftis first B1G player off the board, 4 Buckeyes projected as first-round picks in way-too-early mock draft from CBS Sports
BIG TEN
How the B1G 2022 recruiting rankings look at the beginning of May
BIG TEN
Latest odds released for 2022 college football national champion