To no one’s surprise, Alabama, Georgia and Ohio State remain the unanimous favorites. Alabama and Georgia were both tested on Saturday but came up with wins against their SEC opponents.

Alabama has a predicament at hand now, however, as quarterback Bryce Young left the game early with a shoulder injury.

As for the fourth team in, most experts had Clemson, who has won two straight games against tough ACC opponents.

There were some votes for other teams though. One expert had Oregon and another had Michigan.

The Ducks are 4-1 so far this season and handled business against Stanford on Saturday. Michigan has proved to be one of the best teams in the nation, starting out 5-0 and picking up a big win against Iowa on Saturday. 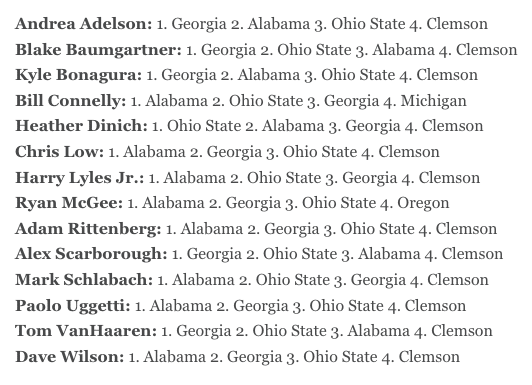