Just kidding. The nine-game conference schedule means that conference play is here quicker than ever before, which was news to some people.

With that said, here are five keys to the start to B1G play (and non-conference finales):

1. Iowa HAS to get off to a fast start

What’s the best way to get the bad taste out of Iowa’s mouth? Score a lot of touchdowns early. Seems simple, right?

Rutgers has been compliant with that game plan so far this season. The Scarlet Knights have allowed 59 (!) first-quarter points. That’s nearly 20 per game for all you math whizzes.

I’m not the first person to find a correlation with early scoring and winning. Last week, Iowa didn’t score in the first quarter against North Dakota State. For the entire afternoon, the Hawkeyes played like a team afraid to lose. The old saying is true. The longer you let an underdog hang around, the more confident they get.

Iowa will be the better team in Piscataway. The earlier the Hawkeyes show that, the better off they’ll be. 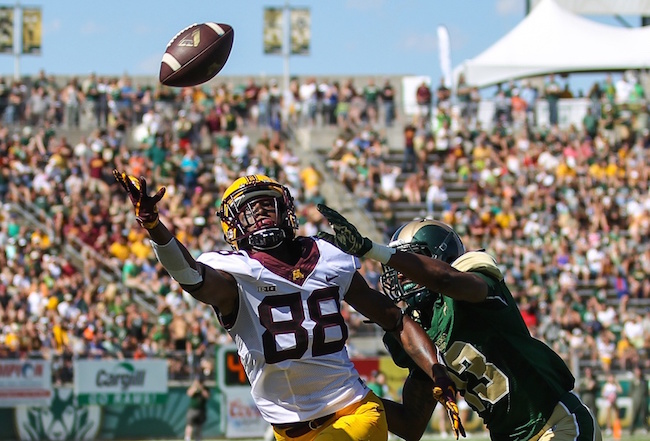 Last year, Minnesota made the trip out to CSU and pulled out a nail-biter. This year, that’d be a letdown if that happened.

The Gophers are two-touchdown favorites for a reason. CSU is 2-1 with wins against the likes of the University of Texas San Antonio and the University of Northern Colorado. What happened in their lone Power Five matchup against Colorado? The Rams lost 44-7.

If you watched the Buffs last week, they frustrated the vaunted Michigan defense with their ability to stretch the field. They did it horizontally and vertically.

Minnesota would be wise to take a page out of Colorado’s playbook. The Gophers have superior athletes. This isn’t one of those Jerry Kill-led, three-yards-and-a-cloud-of-dust-type games. Minnesota has to get some drag routes going. Take a few shots with Drew Wolitarsky. If Shannon Brooks is up for it, get him going on some end-arounds like the ones KJ Maye used to run.

Minnesota has this frustrating tendency to play down to its competition. This can’t be another one of those times.

3. Purdue needs to cut down on turnovers

What if I told you that Purdue was ranked first in the B1G in passing? You’d probably tell me that the Boilers were 2-0 and that Darrell Hazell’s plan was finally showing signs of life. Then I’d remind you that nobody in the B1G has thrown more interceptions than Purdue — despite playing just two games — and you’d come back down to earth.

Hazell and the Purdue offense had two weeks to correct those issues ahead of a home game against Nevada. If David Blough comes out throwing picks in this one, that says a lot about Hazell, too. And not in a good way.

RELATED: Purdue will likely be without two starting offensive tackles vs. Nevada

Regardless of what you think of Purdue’s talent level, this is not a game that the Boilers should be coughing the ball up. Nevada is 105th nationally with just two turnovers forced in three games. With or without Markell Jones, Purdue has to avoid big mistakes.

For what it’s worth, B1G teams usually do that against teams like Nevada. The B1G is 24-1 with an average margin of victory of 21.6 points in the last 25 meetings against the Mountain West.

Hazell’s job isn’t on the line Saturday, but if he can’t get a win against a mediocre Mountain West team with two weeks to prepare, the end is nearer than some might realize. 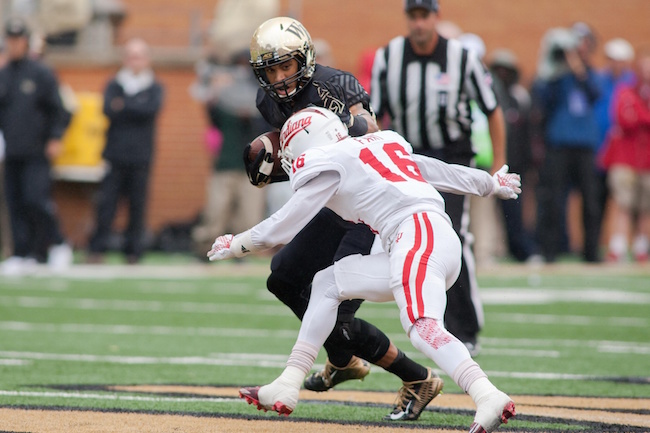 4. Indiana has to put 60 minutes together

Kevin Wilson hit the nail on the head. His team and fans need to put together a 60-minute effort. In the second half vs. FIU and the first half against Ball State, Indiana had a 43-3 advantage. In the other two halves? IU was outscored 30-22 by two teams it should beat comfortably.

Against Wake Forest, IU has to get a complete effort heading into B1G play.

Rarely is Indiana a touchdown favorite against a Power Five team. Expectations are that the Hoosiers control the pace and look like a team that had two weeks to prepare. There should be no excuses about a lack of fresh legs.

IU could need that against a Wake Forest team coming in with some rare momentum. This is the first time in the last nine years that the Demon Deacons are 3-0. But on the flip side, they’ll start backup quarterback John Wolford, who was benched in the season opener.

That’s all the more reason for Tom Allen’s defense to take another step and deliver a convincing performance.

5. Northwestern must open up the playbook for Clayton Thorson

With all the speed Oregon has, I couldn’t believe that the Ducks didn’t take more shots downfield against Nebraska. I get that the Ducks want to work an up-tempo offense and stretch the field, but why not try and expose the Huskers deep?

Northwestern, an offense not known for taking many risks, has to be willing to do that with Austin Carr. They don’t have to be five-step drops and 40 yards downfield, but he has to be given the chance to make a few 20-30-yard catches. Clayton Thorson is developing more trust in Carr, which is exactly what this team needs after an awful start.

Northwestern is still going to run the ball far more than it passes, regardless of how healthy Justin Jackson is. The Wildcats won in Lincoln last year with Jackson running for only 40 yards. Why? Northwestern opened up the playbook for Thorson. They had designed runs, he made high-percentage throws and he took some shots downfield.

Thorson is coming off his most prolific passing game of his career. It’d be wise to let him try and build on that against a defense that was among the worst in FBS against the pass in 2015.

But if the Wildcats play it safe, don’t be surprised when the road team wins this game for the third straight year.

This is what happened the last time the road team didn’t win: