It’s already the final weekend of spring football. That means we’ll have to wait another four and a half months for live action.

But before B1G teams up close up shop for the summer, here are a few questions that should be answered in the final week of spring football.

1. How concerning is Iowa’s secondary?

Brandon Snyder’s injury was as big of an offseason injury as an in college football so far. The loss of the Iowa safety put pressure on a group of defensive backs that was already dealing with the loss of All-American Desmond King.

You knew depth was a big concern when Kirk Ferentz announced that tailback Noah Clayberg would be switching to safety. Outside of returning strong safety Miles Taylor, who hasn’t had to be a playmaker in his career, Iowa lacks experience in the secondary. Manny Rugamba showed promise as a true freshman in 2016, though he’ll be in a much more prominent role without King.

Michael Ojemudia and Joshua Jackson could make a case to win the other starting cornerback job. Perhaps an underclassman like Cedric Boswell will step up. The other safety spot remains the biggest mystery without Snyder. Will Jake Gervase or Amani Hooker make a few big plays in the spring game and separate themselves?

Certainly anyone looking like an every-down player on the back end would put Iowa fans’ minds at ease. 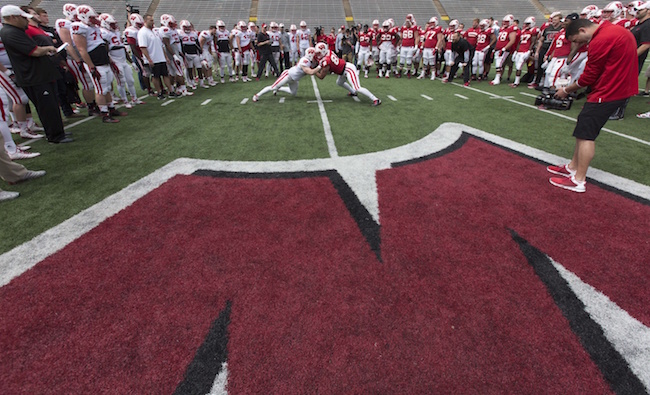 It might not be a bad idea to keep the roster handy for Wisconsin’s spring game. It’s not that the Badgers have a ton of turnover. They actually have 15 starters returning. How many of them we’ll see in live action, however, is the bigger question.

Seven of Wisconsin’s potential starters missed significant time this spring with injuries. The good news is that according to the Milwaukee Journal Sentinel, all of them are expected to be cleared by June. The other good news is that forced Wisconsin to give increased reps to underclassmen during spring ball.

Freshmen offensive linemen Tyler Biadasz and Patrick Kasl should see plenty of work on Friday with starters Jon Dietzen and Jacob Maxwell banged up. We should also get to see former U.S. Army All-American Cole Van Lanen get a long look.

There will likely be even more fresh faces at linebacker. Jack Cichy and Chris Orr are still working their way back to full strength while Ryan Connelly and T.J. Edwards were both out this spring. Wisconsin’s top linebackers will watch the likes of Zack Baun, JUCO transfer Andrew Van Ginkel and former walk-on Mike Maskalunas get work alongside veterans Garret Dooley and Leon Jacobs.

Two of Wisconsin’s most steady position groups might look as young as ever on Friday. Fortunately for the Badgers, that won’t be the case come September.

3. Will Caleb Henderson sieze control of the starting job?

There’s a prime opportunity sitting there for Henderson. Maryland fans are anxious to see what the UNC transfer looks like after reuniting with Walt Bell. After sitting out a season, Henderson will get a chance to get some separation or possibly even win the quarterback battle.

Yes, Maryland has much more talent at the quarterback position than in recent memory. Tyrrell Pigrome and Max Bortenschlager both played as freshmen and showed flashes of being starter-worthy. Some believe that true freshman Kasim Hill can make a legitimate push for the gig when he arrives in the summer.

But Henderson can earn a strong vote of confidence with a good showing on Saturday. Does he look like another Mitchell Trubisky? Is he the polished passer Maryland’s been searching for?

If Henderson carves up the Terps’ secondary, he’ll be the clear favorite heading into the summer.

4. What flow will Jerry Kill’s offense have?

Yes, Rutgers is likely going to play two-hand touch during its spring game on Saturday. Injuries and a lack of depth will likely keep the Scarlet Knights from playing real football.

Having said that, we should still get an idea for what Kill’s offense will look like. We know that he plans on running some sort of spread look. The spring game should also provide a better feel for the tempo Kill wants the offense to operate with.

It’ll be interesting to see if either Giovanni Rescigno or Zach Allen can get into a throwing rhythm. Even without Jawuan Harris (baseball), Ahmir Mitchell (torn ACL) and likely Janarion Grant (recovering from 2016 ACL injury) the playing conditions should be perfect for both to shine.

It’s hard to look too deep into a game of two-hand touch, but you get the feeling that Kill wants to lay down some important ground work heading into the summer.

5. Who will be the playmakers on Penn State’s defensive line?

Penn State did return nearly all of its 2016 B1G Championship squad, which has been well-documented. But the Lions lost some big-time defensive line production each of the last two years. Austin Johnson, Carl Nassib, Evan Schwan, Garrett Sickels and Anthony Zettel accounted for 72 tackles for loss and 41 sacks the past two seasons.

With Sickels leaving school early and Schwan graduating, all five of those guys are now gone. Saturday should provide some insight as to who will fill those big shoes.

There’s been buzz about sophomore Shareef Miller, who could take over one of the defensive end spots after posting 5.5 tackles for loss as a redshirt freshman.

Torrence Brown flashed his playmaking ability as a sophomore and he could lock down one of the end spots with a big spring game. Ryan Buchholz will also have an opportunity to make his case on Saturday.

But the leader in the clubhouse to become Penn State’s next playmaking defensive lineman isn’t at one of the end spots. Sophomore defensive tackle Kevin Givens has been “unblockable,” according to PSU offensive line coach Matt Limegrover. With praise like that — coupled with an impressive freshman season — Givens likely already has a starting tackle job in hand.

Givens’ stock will continue to rise if he can plant a couple of pretend sacks on Trace McSorley.