In fact, many former B1G players went from undrafted free agents to NFL stars. What’s to say a few more won’t be added to the list in 2017?

Here are five former B1G players that could emerge as undrafted NFL rookies:

“We had (Shelton) up there pretty high, and that’s why we went after him, really, right after the draft,” Cardinals coach Bruce Arians said via ArizonaSports.com. “We really liked him. It really came down — we had Rudy (Ford) way up there and we traded up — or we’d probably have drafted him in the seventh round.”

The first-team All-B1G selection might not have been drafted because of his 5-9 frame, but he’s going to get a prime opportunity to succeed in Arizona. The Cardinals are in desperate need of filling their No. 2 corner to play alongside Patrick Peterson, and they don’t have any other established starters in camp. Early reports out of camp suggest that Shelton can become that guy.

Arians said that Shelton “knows how to play the position,” which is usually a good sign for a guy trying to make a living doing just that. Shelton isn’t a lock to make the 53-man roster — no undrafted free agent is — but his road to a starting spot is clearer than a whole lot of the 253 draftees.

It’s easy to pick the son of a former NFL star, but Nickerson is more than a name. He showed that in his one year at Illinois, where he played for his dad and led the team in tackles. Like his dad, Nickerson will also get a chance to play for Marvin Lewis.

Lewis said that the younger Nickerson has a lot of the same qualities his dad had that made him great as a player when he coached him in the early 1990s. Nickerson is certainly well-coached and technically sound. And even better for him, the Bengals also have a history of maximizing potential of undrafted linebackers like Vincent Rey and Vontaze Burfict.

Bengals.com editor Geoff Hobson had some high praise for Nickerson early in camp.

The word from last weekend’s rookie minicamp is that Nickerson’s command of the huddle was staggeringly good and had long time Bengalites trying to remember the last time somebody did it like that so decisively with so little fanfare. He apparently stepped in there like a 10-year vet and smoothly ran the defense.

The question will be whether or not the 6-0, 230-pound linebacker can take on blocks at the position. The preseason will be big for the high-motor Nickerson. The Bengals do have a crowded linebacker situation, but it wouldn’t be surprising if Nickerson’s tackling ability made him a special teams weapon before he got a shot at his natural position. 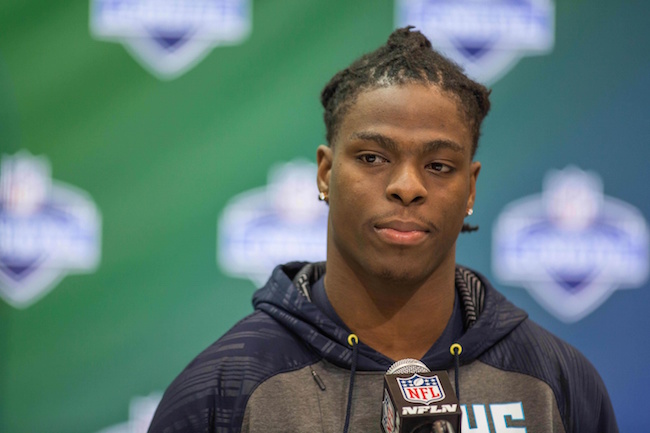 An undrafted free agent can’t walk into a situation with a closed door and succeed. The door just has to be cracked. Fortunately for Stribling, the door is wide open for him to emerge in Cleveland. The Browns’ fourth-round pick, Houston cornerback Howard Wilson, fractured his kneecap and will likely miss 2017.

Cleveland’s signing of the former Michigan cornerback, who allowed the lowest completion percentage among all FBS cornerbacks in 2016 (Pro Football Focus), could pay off. The fact that Stribling tested poorly at the combine undoubtedly hurt his draft stock, but that’s not going to determine his future with the Browns.

With Wilson sidelined, Stribling will battle in a group that includes former Minnesota star Briean Boddy-Calhoun and former Rutgers star Devin McCourty. Joe Haden and Jamar Taylor are slotted as the starters, but none of the Browns cornerbacks have Stribling’s length. That, plus his outstanding cover skills, could earn him a rotational role in the secondary.

It’s a good sign for an undrafted free agent when he gets a signing bonus. That was the case for the former Purdue offensive lineman. He caught the attention of Seahawks coach Pete Carroll in the pre-draft process with his 41 bench press reps at Purdue’s pro day. The undrafted free agent made a “great” early impression on his new coach.

“Yeah, I really liked Jordan Roos,” Carroll said during rookie minicamp via Seahawks Wire. “I thought he looked really good. That was a really important signing for us, we had targeted him through the draft, and we weren’t able to get him, but he looks like he fits right in.”

The left guard didn’t get a combine invite, nor did he hear his name on draft day, but that’s of little concern to the Seahawks. They need all the help they can get to protect Russell Wilson, and they don’t care where it comes from.

The fact that Carroll said that Roos “looks like a player who can compete for playing time immediately, not just a backup job” leads one to believe that he looks like a good bet to do more than just make the 53-man roster.

Ok, so I’ve already hammered this point home. But can we remember just how good the former Northwestern walk-on was in 2016?

The New England Patriots reportedly signed Northwestern UDFA WR Austin Carr. At 89.5, he had the best overall grade in the draft class. pic.twitter.com/2LUdVPJ5b0

The Patriots, with their ability to turn overlooked receivers into stars, were an obvious fit for Carr after he somehow went undrafted. So how has this match made in heaven gone so far?

Well, the 2016 B1G Receiver of the Year said all of the right things in his first media session. He’s learning from Danny Amendola and Julian Edelman all while trying to absorb the Patriots offense. Carr doesn’t look like the Patriots’ typical slot receivers. He’s taller and lacks quickness, but like the ones who came before him, Carr is an extremely talented route-runner.

Carr signed with New England despite the fact that the team is loaded with talented veteran receivers. With many of those guys taking limited snaps in the preseason, he’s going to get a chance to shine.

It shouldn’t be long before Bill Belichick is getting praised for Carr’s success.