Why hasn't College GameDay traveled to a B1G school yet, and when will it?

Everyone wants them to come to their city.

Does it make a difference in who wins or loses the game? Not necessarily, but when College GameDay is in the house, the atmosphere is second to none. Every school in America would open up their doors to host the GameDay crew.

Usually, GameDay hits B1G country a couple times during the regular season. That hasn’t happened yet. Yes, GameDay began the season at LSU-Wisconsin at Lambeau Field, but that technically wasn’t a B1G school.

Since that game, however, it’s been all ACC and SEC so far. After this week, Tennessee will have been a part of its third College GameDay game. That’s more appearances than every other Power Five conference besides the ACC:

Why has that been the case so far? Well, the SEC has had a lot of top-flight games. Florida-Tennessee was a rivalry game with two top-20 teams in a raucous atmosphere. This week’s GameDay site — Tennessee at Texas A&M — features two top-10 teams in front of 100,000 people.

GameDay kicked off the season with two neutral site games, which means that the crew has been to two SEC schools, two ACC schools and two neutral venues.

As much as that might frustrate B1G fans, it was hard to argue with any of those calls. 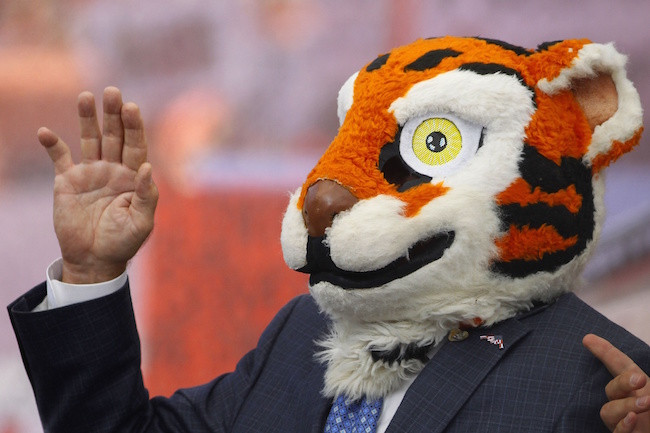 Why couldn’t GameDay have made the trip to Ohio State-Oklahoma? That was FS1’s headliner game of the year. GameDay wasn’t touching that. What about Michigan State-Notre Dame? GameDay hasn’t been to South Bend in four years despite some big games for the Irish. You never know with Notre Dame’s NBC relationship.

But for whatever reason, GameDay is more than willing to travel to an SEC school even if CBS has the broadcast that day. That was the case for the Florida-Tennessee game and the same is true for the Tennessee-Texas A&M game this Saturday.

Outside of the aforementioned B1G showdowns, the B1G has only had two games that featured top-25 teams. As you’ll recall, that’s a major prerequisite for a GameDay site. Two weeks ago was Wisconsin-Michigan State. That was actually a top-10 matchup. But with Big Ten Network already set to host its first “BTN Tailgate” in East Lansing, that could’ve come into play. It was also a noon game, which GameDay rarely does.

Usually, that’s a deal breaker. But it wasn’t when GameDay traveled to Florida State-Louisville in Week 3 to see Lamar Jackson.

Maybe it won’t be when Michigan and Ohio State — two teams that almost always play at noon— face off in the regular-season finale.

@KirkHerbstreit @CollegeGameDay Barring a catastrophic meltdown, GameDay will be at Michigan vs. Ohio State for #TheGame this year right?

The other top-10 B1G game was Michigan-Wisconsin last week. That was a 3:30 p.m. ET kick with two top-10 teams in one of college football’s best atmospheres. Why didn’t GameDay come to Ann Arbor?

It wasn’t a battle of top-five teams with two Heisman candidates at quarterback. That was at Clemson. GameDay would’ve been foolish not to make the trip for Lamar Jackson vs. Deshaun Watson.

So how long will it take for GameDay to come to B1G country? Well, it might not be long. It’s actually shaping up well to happen a week from Saturday in Madison.

No. 11 Wisconsin, which is on bye this week, will be a borderline top-10 team for its showdown vs. No. 2 Ohio State. As long as the Buckeyes don’t suffer the upset of the year at home against Indiana on Saturday, it would make perfect sense. The game is already set for an 8 p.m. ET kick on ABC.

Here’s the competition for Week 7:

If GameDay goes to a Tennessee game for the fourth time this year, it’ll never hear the end of it. Ole Miss-Arkansas is a good game, but in all likelihood, Arkansas will be coming off a loss after facing Alabama this Saturday. And UNC-Miami would be nice, but GameDay hasn’t been to Miami for a regular-season game since 2001 because of how weak the local fan support is.

Ergo, Ohio State-Wisconsin makes perfect sense. Camp Randall will be rocking for that one with how good both teams looked to start the season.

There could be a few other options for GameDay to venture to the Midwest. That Nebraska-Wisconsin game on Oct. 29 could be a possible B1G West championship.

Michigan-Michigan State that day might’ve originally been a top GameDay target, but the Spartans would have to dominate their next three games and get back into the top 25. Clemson-Florida State and Washington-Utah would be the only legitimate competition for those games.

Best-case scenario for the B1G is likely next week in Madison, one of those two games and then Michigan-Ohio State to end the season. Who knows if that’ll happen. With how many good B1G games are on tap, it’d be surprising if GameDay stayed away from B1G schools.

Sooner or later, though, GameDay will stop going to Tennessee games.