Nearly everyone is familiar with the Associated Press Poll, but likely far fewer people know about the Las Vegas Power Ratings.

Compiled by Phil Steele, he released the Week 8 edition of these ratings on his eponymous website on Wednesday.

According to Steele, the idea behind these ratings is to give you an idea of how much teams would be favored over another if they met on a neutral field. 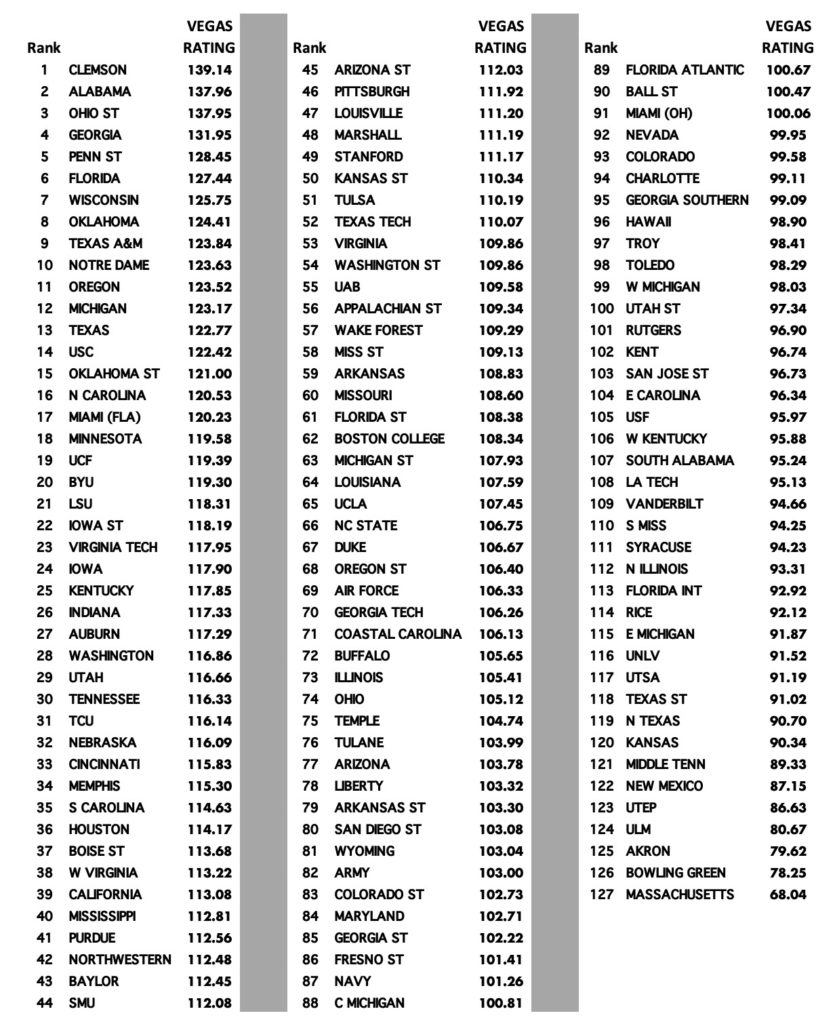 Behind the No. 1 Clemson Tigers and No. 2 Alabama Crimson Tide, the No. 3 Ohio State Buckeyes were the first Big Ten Conference program to appear.

After the Buckeyes, James Franklin’s Penn State Nittany Lions checked in at No. 5, followed by Paul Chryst’s Wisconsin Badgers at No. 7 and Jim Harbaugh’s Michigan Wolverines at No. 12.

P.J. Fleck’s Minnesota Golden Gophers occupied No. 18, Kirk Ferentz’ Iowa Hawkeyes slotted in at No. 24, and Tom Allen’s Indiana Hoosiers and Scott Frost’s Nebraska Cornhuskers reside at No. 26 and 32, respectively.

Greg Schiano’s Rutgers Scarlet Knights were the lowest-rated B1G program, placed at No. 101.

The 2020 B1G season will begin at 8 p.m. ET on Friday when Lovie Smith’s Illinois Fighting Illini travel to Madison to battle Wisconsin on the Big Ten Network (BTN).

The first slate of games will conclude at 7:30 p.m. ET on Saturday when Minnesota hosts Michigan on ABC and Mike Locksley’s Maryland Terrapins make the trip to Evanston to clash with Pat Fitzgerald’s Northwestern Wildcats on BTN.

Teddy Rydquist
A graduate of Bowling Green State University, Rydquist has been contributing to Saturday Down South and Saturday Tradition since 2019. He can be found on Twitter @TeddyRydquist.