Controversy and criticism was thrown the way of the College Football Playoff selection committee again on Tuesday night. It’s not so much for the teams ranked inside the Top 4, but those left on the outside looking in.

Cincinnati dropped, despite owning an 8-0 record. A two-loss Iowa State team moved up to No. 6 while a one-loss Indiana still sits outside the Top 10. Texas A&M, Florida and Georgia all still reside inside the Top 10, as well.

The committee was under harsh scrutiny Tuesday night for grading some teams on one set of criteria and grading others using a completely different method. So, that calls into question what the rankings might look like using the old BCS formula.

Here’s what those rankings would look like, according to BCSKnowHow.com 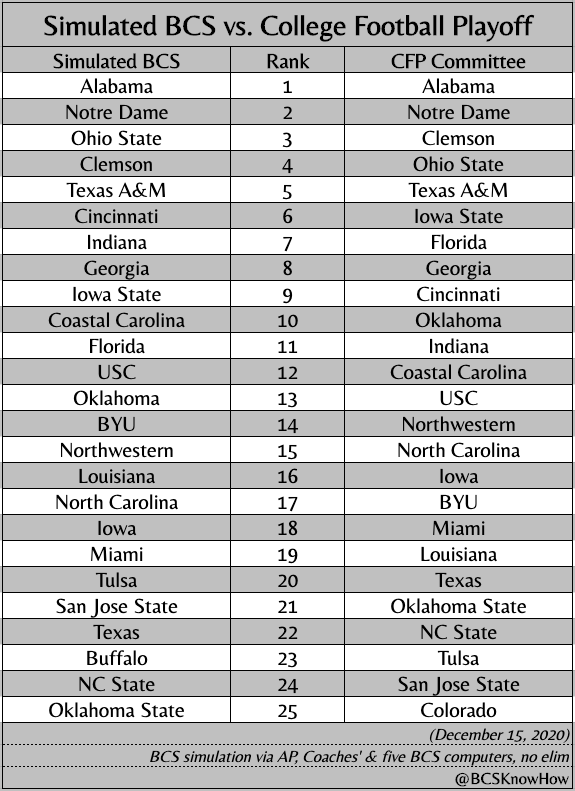 Perhaps the biggest takeaway from this is that Indiana — which is 6-1 with its only loss to Ohio State — jumps all the way up to No. 7 with an outside shot at cracking the Top 4. The Buckeyes are also listed at No. 3, one spot ahead of Clemson.

There are plenty of other noticeable differences in the rankings, but those are the two with B1G implications. What are your thoughts?

A side-by-side comparison of tonight’s penultimate @CFBPlayoff rankings and what this week's #BCS would've looked like: pic.twitter.com/cqTN8tw1j5