How did Iowa's shocking win vs. Michigan shake up B1G picture? A lot

We were waiting on November madness. Holy cow, did we get it.

Saturday night’s stunner in Iowa City put an exclamation point on the craziest Saturday of the year in college football. In fact, the last time three top-four teams lost on the same day, it was 1985.

What else happened that day? Michigan quarterback Jim Harbaugh lost at No. 1 Iowa on a game-winning field goal.

Nobody saw an Iowa team that was embarrassed coming out and punishing Michigan at the line of scrimmage. When C.J. Beathard threw that game-sealing interception, nobody thought the Hawkeyes would come back and win on a walk-off field goal.

But hey, it’s November. It was bound to get weird at some point. Unfortunately for Michigan, it was on the wrong end of weird.

On any other Saturday, Michigan is probably the laughing stock of the college football world. The Wolverines are probably bounced significantly from their No. 2 spot. But given the fact that Washington and Clemson both lost home games for their first losses, Michigan might not be impacted very much at all, other than it now can only get into the playoff field as a one-loss team.

The B1G picture, however, is a different story. 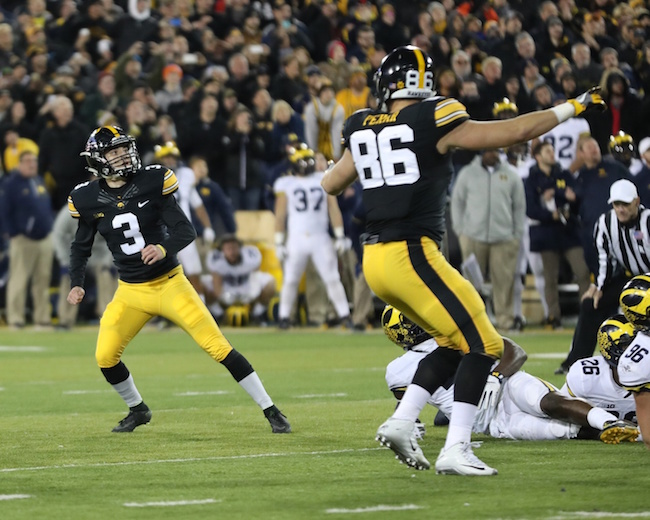 Ohio State fans might not have realized it, but Saturday night was an awful ending for them. Sure, the Buckeyes will likely move up to No. 2 in the College Football Playoff rankings, but they don’t control their own divisional destiny.

Everybody kept saying that OSU controlled its own destiny and that it would all come down to the Michigan game to end the season.

What did Saturday night do? It took away that assumption.

Yes, Michigan can still win out, make the B1G Championship and make the final four. The Wolverines are still in control of their own playoff destiny, especially with Alabama being the only remaining unbeaten. Saturday will sting temporarily because Michigan’s first loss will drop it behind Ohio State and Louisville.

RELATED: Ohio State got a boring blowout win, but that’s not bad on crazy Saturday

But the focus for Michigan is simple. Run the table, get into the playoff.

Michigan is the only B1G team with a clear path to a College Football Playoff berth. Yes, even you, Wisconsin.

Why? Well, Penn State is now in great shape to possibly make it to the B1G Championship. Yes, you read that correctly. The Lions need to beat Rutgers and Michigan State and then have OSU beat Michigan. If that happens, the Lions go to Indianapolis and both Michigan and Ohio State are at home for the second straight year. 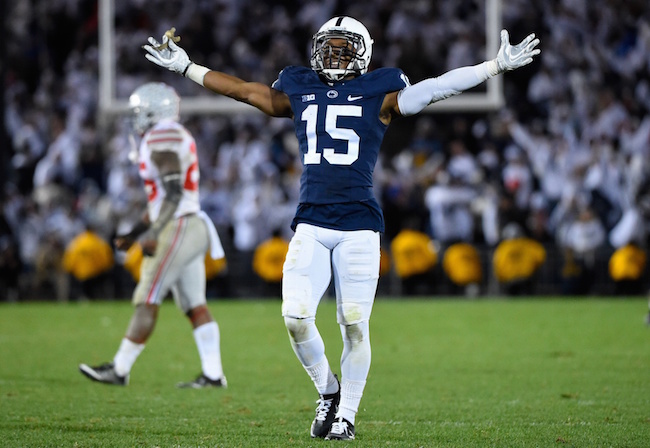 But has a non-conference champ ever made the playoff? No. And if Alabama, Clemson/Louisville and Washington run the table, they’ll be either undefeated or one-loss conference champs.

This is uncharted territory for the committee. Who knows how they’re going to sort this out. How far does Michigan fall for losing to an unranked team that was just waxed? Does Penn State move up to No. 8 and suddenly have a sliver of a chance to make the field after the Pitt loss got a lot better?

We do know that OSU is likely up to No. 2 on Tuesday and the B1G likely has four teams in the top eight. What happens after that is anybody’s guess now.

Meanwhile, Wisconsin is sitting there with two losses and it’s fresh off a blowout win. There’s a chance that the Badgers don’t even move up from No. 7 or that they don’t get past No. 6. With two losses, their upside is still limited.

But what the Iowa win did for Wisconsin was open the door for Penn State. Everyone was assuming that if the Badgers won out, it would include a neutral site win against Michigan or Ohio State. What if the Badgers drew Penn State in the B1G Championship? Would that be a better matchup?

Players won’t think that. But let’s be honest. The selection committee values wins over Michigan and Ohio State more than they do over Penn State. Wisconsin could theoretically win the B1G Championship and get passed up by a one-loss OSU team that didn’t make the conference title game. Why? Well, they have one more loss and they don’t own the head-to-head battle.

We forecasted this situation weeks ago after PSU knocked off OSU. Countless pundits got so caught up in one-loss OSU vs. undefeated Michigan.

Maybe we’re getting ahead of ourselves by assuming OSU will have one loss or that Penn State will beat Rutgers and Michigan State.

As we were reminded on Saturday, just when you think you have college football figured out, it gives you a swift kick in the noggin.