The last time each B1G team suffered a shutout

Offenses in the B1G haven’t quite encountered the profound scoring totals that have populated the West and Southwestern regions of the college football world. Still, in an era where scoring 50 or more points has become a common occurrence, failing to find the end zone seems like an impossibility.

At some point though, every team has done it. Each squad has encountered a bad week – in some cases multiple bad weeks – and hasn’t been able to remove the bagel from the scoreboard.

Wondering when the last time each team in the B1G was held scoreless?  We’ve got the answers.

Illinois suffered its most lopsided loss of the season in a cross-division game against Penn State. A middling Nittany Lions offense had no trouble finding the end zone and outscored the Illini 39-0. It was the team’s third-consecutive loss.

The Hoosiers haven’t been hard to beat but they have been tough to keep off the scoreboard. They currently have the fourth-longest streak without a shutout loss among the Big Ten. The Wolverines pummeled Indiana 16 years ago, winning 58-0.

Four turnovers hindered Iowa against the Fighting Illini, falling 31-0 in the conference clash. Quarterback Kurt Kittner threw for 248 yards and three touchdowns for Illinois. This marked the second time in three seasons the Hawkeyes had been shut out by a B1G foe.

The Terrapins were completely stymied by Michigan on the first weekend in October last year. Maryland converted 1-of-18 third down attempts and rushed for 29 total yards on 26 attempts. The Maize and Blue had no trouble in this 28-0 victory.

Michigan’s FBS record of 365-consecutive games without a shutout loss ended two seasons ago in South Bend. Notre Dame won 31-0 in the final game of what was an annual rivalry between the two programs. It was the first time the Wolverines had been scoreless in a contest since 1984. 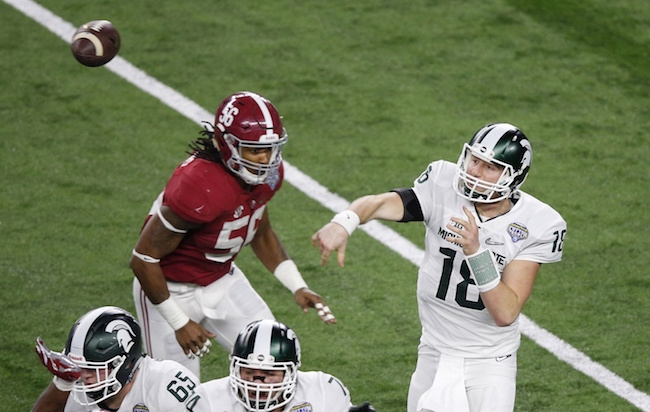 Any hopes of winning a national title for Michigan State were quickly crushed by Alabama in last year’s Cotton Bowl. The Crimson Tide handled the B1G champs with ease, winning 38-0 in the College Football Semifinal. It was a disappointing way to end a 12-2 season.

Minnesota surrendered a field goal in the first quarter and that’s all the Wildcats needed. Two turnovers helped Northwestern to win 27-0. It was the second time the Gophers went scoreless under Jerry Kill.

Many regard the 1995 Huskers as the best team ever to take a college field. Following that incredible title run, Nebraska suffered a disappointing 19-0 loss against Arizona State in Tempe, thanks in large part to three lost fumbles.

Since then, the Huskers have completed 19 seasons without another scoreless outing.

A week after shutting out Minnesota, the Wildcats had a taste of their own medicine. Michigan posted its third-straight shutout of the season, beating Northwestern 38-0. The three previous contests between the two teams were decided by one possession, with two of those games going to overtime.

Fifth-ranked Ohio State suffered its only loss of the year to its bitter rival in the season finale. Michigan posted its fifth win in six seasons over Ohio State, this time by a 28-0 score. The loss ended the Scarlet and Gray’s hopes to compete in the Rose Bowl that year.

The Buckeyes have scored in 283 consecutive games since that day.

Three turnovers and an inept rushing attack cost Penn State an opportunity at an upset bid over No. 15 Michigan in 2001. The Nittany Lions fell to 0-4 to start the season after the 20-0 loss.

In that game, Penn State ran the ball 26 times but only gained 25 yards.

In the midst of a 1-11 season, Purdue suffered a brutal 56-0 loss at the hands of a Buckeyes team that finished undefeated. It was the second-straight shutout for the Boilermakers after enduring a 14-0 loss against Michigan State two weeks earlier.

Running backs Melvin Gordon and Corey Clement combined for 259 yards and four touchdowns in the 37-0 romp over the Scarlet Knights. Rutgers couldn’t get anything going offensively and amassed just 139 total yards and eight first downs in the game.

The Badgers were a 4.5 point favorite to beat the Buckeyes and take home the B1G trophy. What they took instead was a 59-0 lump. It was the first time Wisconsin had been shutout since 1997 and was the most lopsided defeat in over three decades.

Dustin Schutte
Dustin grew up in the heart of Big Ten country and has been in sports media since 2010. He has been covering Big Ten football since 2014. You can follow him on Twitter: @SchutteCFB
RECENT ARTICLES
BIG TEN
NCAA reportedly approves plan to end recruiting dead period
BIG TEN
Report: NCAA expected to approve one-time transfer rule soon
BIG TEN
Mel Kiper Jr. predicts 7 B1G players will go in 1st round of 2021 NFL draft
BIG TEN
B1G teams with the best chance to reach the College Football Playoff, per ESPN's FPI