They say it’s better to be lucky than good. In a perfect world, every B1G team would be both of those things.

Unfortunately, that’s not how it works. Sometimes, a little luck can go a long way.

Need any proof of that? How about Penn State’s blocked field goal return for a touchdown to beat Ohio State? Sure, it wasn’t entirely luck, but the ball literally bounced the Lions’ way and it resulted in one of the biggest plays in school history.

It’s impossible to predict any of those plays this far and advance. But here’s one lucky bounce for every B1G team in 2017.

What it would do — Crazy concept, right? Wes Lunt could’ve used some luck like that throughout his career. Fittingly, Chayce Crouch is still working his way back from shoulder surgery. He’s expected to be the guy in 2017. With a proven offensive coordinator in Garrick McGee, he just needs reps. The Illini offense would show significant improvement of Year II of the Lovie Smith era if that happened.

Lucky bounce — IU holds on vs. a legitimate top-25 team at home

What it would do — Wait, didn’t that happen last year against Michigan State? Well, the Spartans crumbled and what appeared like a get-over-the-hump IU victory turned out to be a win against a three-win team. It seems like the Hoosiers have more close home thrillers vs. top-25 teams than anyone, yet they almost always come up short. Winning just one of those games would be huge in legitimizing Tom Allen’s atypical hiring.

What it would do — Iowa wouldn’t lose any B1G home games.

What it would do — Maryland has matchups against five teams ranked in ESPN’s way-too-early top 25. That’s more than anybody else in the B1G. In other words, that schedule looks daunting. Getting to six wins won’t be easy. Maryland wouldn’t mind if a couple (like Michigan State last year) opponents didn’t quite live up to the hype.

What it would do — Michigan State in 2015, Ohio State in 2016, Florida State in the Orange Bowl last season…you get the picture. Think about how close Michigan was to winning those three huge games. All of them were decided in the final minute by a back-breaking play. Michigan won close games in the Jim Harbaugh era — don’t forget about Indiana and Minnesota in 2015 — but with the exception of the Wisconsin game, it doesn’t work out against the top-10 teams. Michigan fans wouldn’t know what to do if they got lucky late against an elite team.

What it would do — A lot of MSU’s problems last year were rooted in the fact that it had countless defensive injuries. The Spartans lacked depth, and when the likes of Malik McDowell, Jon Reschke and Riley Bullough went down, it showed. MSU only has four starters returning on defense, which means the margin for injury is again small. If MSU’s underclassmen defenders actually get a chance to stay on the field and develop, the Spartans can get back to B1G East relevance. 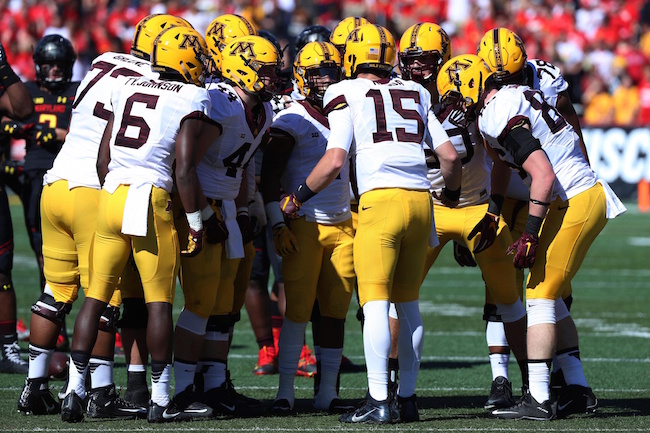 Lucky bounce — A quarterback separates himself in spring camp

What it would do — It would give P.J. Fleck’s new offense a clear vision heading into the fall. There are five guys competing to become Minnesota’s starter, all of whom bring something to the table. Conor Rhoda was talked out of transferring, which might make him the presumed favorite. True freshman Tanner Morgan will have a steep learning curve even as an early enrollee, but he could be the fit Fleck and new offensive coordinator Kirk Ciarrocca are looking for. Whoever gets the job, the quicker the position is settled, the quicker Fleck can begin his offensive revival.

What it would do — We’ve seen defensive coordinators like Dave Aranda and Don Brown come into the B1G and become overnight sensations. If Diaco can become the next coordinator to do that, Nebraska will compete for a B1G West crown. Husker fans are hoping that Diaco can dial up some of the magic the fueled Notre Dame’s run to the National Championship back in 2012. His ability to disguise pressure and confuse offenses — in Year 1 — would be a major blessing.

What it would do — That’s a weird lucky bounce to ask for, I know. But Northwestern’s new lakefront facility is supposed to be finished by Jan. 2018. If that happens, Pat Fitzgerald can get 2018 recruits to Evanston right before National Signing Day to see the new digs. In case you haven’t seen it, it’s incredible. And yes, that will make a significant difference in the recruiting world.

What would it do — It would make Ohio State’s path to its first B1G Championship in three years — and possibly a College Football Playoff berth — much clearer. The Buckeyes lost control of their own destiny at Penn State last year. Now, the Lions might have more returning talent than Ohio State. But this group has never had to handle the rigors of preseason hype. If they didn’t look like the elite team that finished 2016, OSU would stand to benefit the most.

Lucky bounce — Saquon Barkley breaks ankles (not literally), but not his own

What would it do — Barkley’s ankle injuries have made Penn State fans’ hearts skip a beat on multiple occasions. People forget that Barkley wasn’t at 100 percent for several games in his monster 2016 season. Barkley’s health is obviously of the utmost importance for Penn State reaching its sky-high preseason expectations. His ability to stay on the field and continue to devastate defenders could be the difference in PSU’s first playoff berth.

Lucky bounce — Missouri still hasn’t figured out how to defend

What it would do — That seems random, right? Well, picture this scenario. If Purdue can get to the Missouri game at 1-1 — loss vs. Louisville and a win vs. Ohio — the Boilermakers will test out Jeff Brohm’s high-flying offense against a defense that ranked 118th in 2016. Hypothetically, let’s say the Boilermakers light up the scoreboard at Mizzou and even pull out a win. Brohm’s B1G debut would be a home game against Michigan the following week. At the very least, a 2-1 team that scores would put plenty of people in the seats at Ross-Ade.

Lucky bounce — The NCAA takes it easy on Rutgers

What it would do — On the field, Rutgers can’t get much worse than what it was in 2017. Off the field, it can still get worse. The Level II violations from the Kyle Flood era mean that Rutgers’ NCAA punishment still looms. As long as it’s not a significant reduction in scholarships or a bowl ban, the Scarlet Knights should be able to roll with the punches. But with NCAA punishments, you just never know.

Lucky bounce — B1G West offenses are a work in progress

What it would do — In case you forgot, there are some offensive overhauls in the B1G West. Illinois, Iowa, Minnesota and Nebraska all lost multi-year starters at quarterback. And frankly, no B1G West offense really lit up the scoreboard last year. Wisconsin, which has another new defensive coordinator, would benefit greatly from having the division’s only unit that can truly impose its will week in, week out. The Badger defense allowed 12 points per game against B1G West teams last year. If that number stays the same, they’ll be going back to Indianapolis.