Selecting an all-time team for an entire conference is an insanely difficult task. FOX college football analyst R.J. Young accepted the challenge over the summer and shared his results with one B1G head coach.

Young produced his All-Time B1G Team, including some of the greatest players on both sides of the ball. At B1G Media Days, Young was confident enough to hand his selections over to Northwestern head coach and former linebacker Pat Fitzgerald.

The Northwestern head coach said he would make a few tweaks to the roster.

Noticeably absent from the offensive side were former Ohio State running backs Eddie George and Archie Griffin. Defensively, Fitzgerald thought he should have been included. Well, at least he believed that’s the case since Young has former Wisconsin defensive back and current defensive coordinator Jim Leonhard on the list.

Here’s the clip of Fitzgerald providing his feedback:

Northwestern coach Pat Fitzgerald told me he should be on the All-Time Big Ten Defense. What say you?pic.twitter.com/rZwHZy09hC

Below are the selections Young made earlier in the summer. What changes would you make to these rosters? 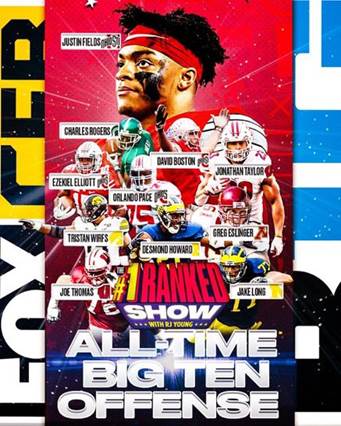 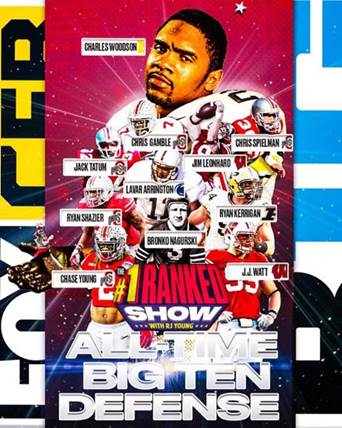 TRENDING
35,010 READS
B1G 10: PJ Fleck can win big. But will it be at Minnesota? The clock is ticking ...
17,699 READS
Jestin Jacobs, Iowa LB, to miss remainder of 2022 season
10,646 READS
Michigan DT Kris Jenkins addresses matchup with Iowa: 'They're going to give us violence'
LATEST NEWS
View All
2 hours ago
Tim Brando shares top 10 teams after Week 4 action
3 hours ago
ESPN's FPI predicts the outcome of Indiana at Nebraska
3 hours ago
Taulia Tagovailoa practicing ahead of Maryland's Week 5 game against Michigan State
4 hours ago
College football rankings: 3 B1G teams featured in Super 16 after Week 4
4 hours ago
PFF’s highest-graded defenders in 2022 include 2 from B1G
5 hours ago
Nebraska AD announces changes to Huskers mascot for 2023
VIEW MORE