Every conference laughed at the SEC after an awful Week-1 showing.

It was all good fun bashing the almighty SEC after several embarrassing season-opening performances. And while the LSUs, Mississippi States and Tennessees were the punchline of many jokes, SEC apologists pointed to the fact that the conference was 3-2 against top-25 teams.

It was a gauntlet opening week for the SEC. Now, it’s a gauntlet Week 3 for the B1G. Given the strength of opponents the B1G has, this week has potential for embarrassment. But it also has potential to solidify a playoff spot for the conference.

With all due respect to BYU, Colorado State, Nevada and Wake Forest, this is the last weekend for the B1G to pick up a quality non-conference win. We know how entrenched people become with conference strength once conference play starts.

The B1G could have five top-10 worthy teams by the end of the weekend. That obviously bodes well for the B1G’s playoff chances. Even if one of those teams wins the B1G Championship and finishes with one loss — two is the unofficial eliminator until proven otherwise — it would be awfully tough for the conference to get left out.

But let’s reel this back into this weekend. 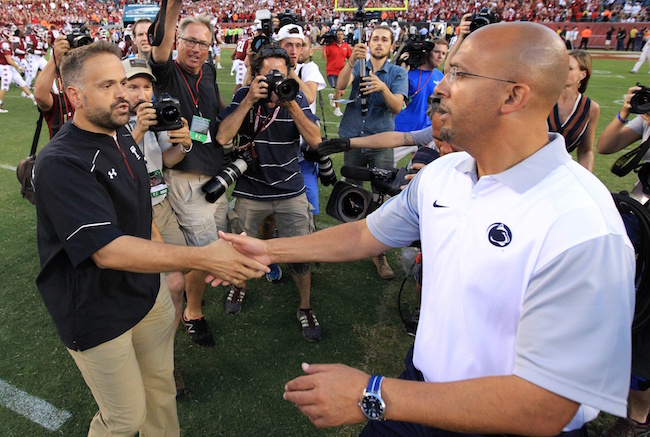 Iowa and Penn State fall into this category because of what their opponents have done in recent memory.

Everyone knows that North Dakota State won five straight FCS national titles. Obviously everyone in that Iowa locker room is aware of that. And for what it’s worth, I think the Hawkeyes should win this game by a few touchdowns even though someone will inevitably pick NDSU to pull off the upset.

RELATED: Why Week 3 is the B1G’s most important regular-season weekend in a long time

But for B1G West teams hoping to sneak into the playoff conversation — looking at you Nebraska and Wisconsin — Iowa needs to be in the top 15 throughout conference play for anyone to pick up a quality win. Losing to an FCS team, even a dominant one, would certainly hurt that.

Then there’s Penn State, which faces seemingly every B1G contender except for Wisconsin. The Lions’ loss at Pitt halted any chance at a top-25 spot heading into the Michigan game. But PSU is part of the middle-of-the-pack group of the B1G that nobody is sold on yet. One of the conference’s well-known programs obviously needs to avoid a repeat of last year’s Temple game.

I already wrote about the importance of Saturday’s game for Mike Riley’s life in Lincoln. It has a few other implications. Nebraska can put itself into the top 25 with a win against Oregon. On the flip side, a loss could keep the Huskers out of the top-25 conversation and without a quality win until they travel to Wisconsin on Oct. 29.

We all know how that went last time:

The more B1G teams in the top 25, of course, the better that conference-strength argument becomes. There could also come a point in time when the Pac-12 and B1G are being compared by the CFP Selection Committee. The Rutgers-Washington game wasn’t a fair fight. The Oregon-Nebraska game is.

One game won’t dictate whether or not one conference is stronger than the other, but it certainly won’t hurt the B1G if that discussion becomes relevant to the committee. 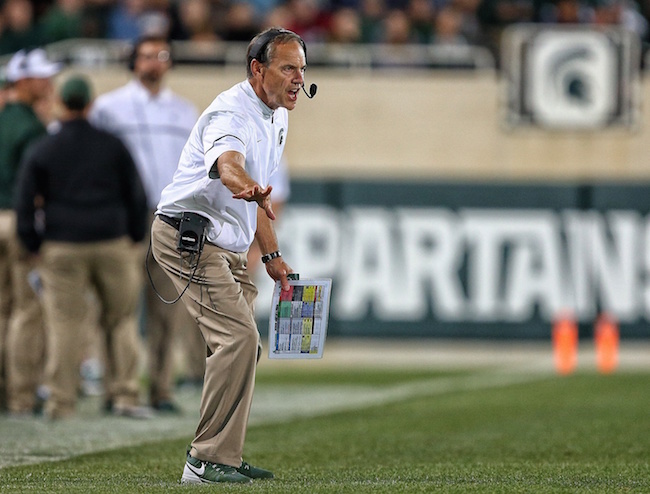 That’s what Michigan State and Ohio State have in front of them. Quality wins in the playoff system seem to be worth more out of conference. It’s no secret that the committee likes to reward teams that actually schedule a challenging non-conference game.

Michigan State and Ohio State can obviously get that reward and do something the B1G didn’t do all of last season. That is, win a top-25 road game in non-conference play. In fact, the only B1G team to do that in the playoff era was Indiana when it took down eventual SEC East champ Missouri.

So yes, this is rare territory that the B1G finds itself in. A win this weekend and MSU and OSU could still theoretically lose a B1G game and make it to the playoff. That much we know.

RELATED: With a win at Oklahoma, does J.T. Barrett become the Heisman favorite?

Let’s say the B1G stubs its toe this weekend and drops all three headliner games. That would mean Wisconsin would be the only B1G team with a quality non-conference win heading into conference play. Assuming Iowa, Michigan and Wisconsin all win this weekend, the B1G would still likely have four teams in the top 13. That would likely still be more than any conference.

But it would be a slippery slope.

Theoretically, an undefeated B1G team would have no issues getting into the playoff. If MSU and OSU lost this weekend while someone like Iowa, Michigan, Nebraska or Wisconsin ran the table, the aforementioned point is moot. The B1G would make it 3-for-3 getting one team into the playoff and life goes on.

This weekend is key for the one-loss scenario. Clemson was unbeaten, but Alabama, MSU and Oklahoma all made the playoff last year with one conference loss, two of which came at the hands of unranked teams. Why? Each one of them won a non-conference game against a top-25 team.

How many Power Five teams have gone undefeated under the nine-game conference schedule? Zero. Odds are, no B1G team will run the table. That’s when conference strength becomes huge.

This weekend, the B1G has a prime opportunity to flex its muscles. The selection committee will definitely checking out how strong the B1G really is.