Ranking the top five careers of B1G offensive linemen since 2000

The heart and soul of the B1G rests in the trenches.

It’s how the conference earned and maintained that rough-and-tough image. And it’s why the smash-mouth style of play still remains a prominent fixture in one of the top conferences in college football.

So, needless to say, the conference that places such heavy emphasis on strong line play has housed a plethora of offensive line talent. In fact, the B1G has had five players bring home the Outland Trophy (best interior lineman) and six win the Rimington Award (best center) since 2000.

Only the SEC has more.

This was a tough category to break down and separate the top five from the rest. So before we take a look at our top players, here’s the offensive lineman that received an honorable mention:

And here are the five players that enjoyed the best careers on the offensive line in the B1G since 2000:

A three-time All-B1G selection, Elflein was a key contributor on Ohio State’s offensive line for several seasons. Because of his leadership, the Buckeyes led the conference in rushing yardage in 2015 (245.2 ypg) and 2016 (245.2).

Elflein has paved the way for running backs Ezekiel Elliott and Mike Weber and was a starter for Ohio State’s 2014 national title team. The Buckeyes have accumulated a 37-4 record with Elflein starting on the front line.

In his final season in Columbus, Elflein won the Rimington Award, was named the B1G’s Offensive Lineman of the Year and was a first-team All-American selection. He also earned second-team All-American honors as a junior  in 2015.

Had a shoulder injury in 2005 not hampered his sophomore campaign, Long might be higher on this list.

Long had an immediate impact for Michigan when he arrived in 2004, starting 10 games in his first season and earning Freshman All-American honors as the Wolverines captured a conference title. And after an abbreviated year in 2005, Long wreaked havoc on defensive lines in the B1G in 2006 and 2007.

In those two seasons, Long allowed just three sacks and had only one penalty in 1,743 snaps. He also maintained an 87.4 percent blocking consistency rating and had 33 blocks resulting in touchdowns during that time.

Long receive plenty of recognition for his final seasons as the Michigan lineman was an All-B1G and All-American selection in 2006 and 2007 and was a two-time B1G Offensive Lineman of the Year.

Allen had one of the most successful careers for an offensive lineman in Michigan State’s history with 47 starts in 48 appearances for the Spartans over his four-year career.

During his four years, Allen was only charged with allowing three sacks. In 2012 he earned Freshman All-American honors, and was named an All-American in 2014 and 2015, as well. He was also an All-B1G selection every year in East Lansing, earning first-team honors twice.

From 2013 to 2015, the Spartans went 36-5 and claimed a pair of conference crowns and a berth in the College Football Playoff. There’s no question Allen was a major contributor to Michigan State’s overwhelming success during that stretch.

Wisconsin is notorious for producing quality offensive linemen. Thomas might be the best of the bunch, at least recently.

Thomas was a two-time All-B1G and All-American selection in his junior and senior years and was the winner of the Outland Trophy as the nation’s top interior lineman in 2006. He was the first Wisconsin lineman to take home that honor.

Every year during Thomas’ career in Madison the Badgers averaged more than 160 yards per game on the ground and ranked in the top 30 in scoring in 2005 and 2006. Thomas was responsible for 69 blocks that led to touchdowns.

He also graded 87.4 percent for blocking consistency over the course of his college career. 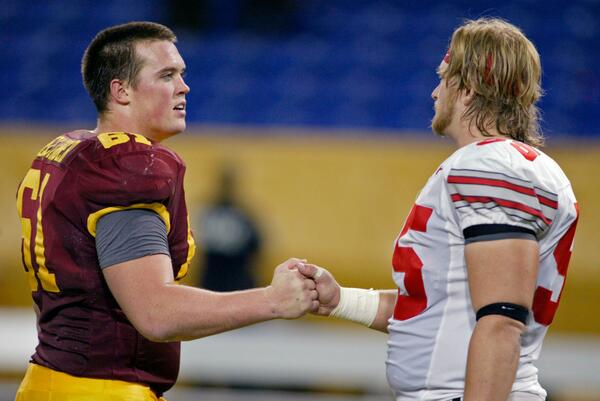 There wasn’t a single game of Eslinger’s college career that he didn’t start. And because of that, he’s remembered of one of the best offensive linemen in Minnesota’s history.

Eslinger started all 50 games with the Gophers and earned All-American honors in some capacity every single year. He was a freshman All-American in 2002 and a third-team selection in 2003. In 2004 and 2005, he was named a first-team All-American after Minnesota led the B1G in rushing both seasons.

After a stellar senior season, Eslinger was awarded with the Outland Trophy and the Rimington Award in 2005.

He also finished his senior season with a blocking consistency grading of 84.8 percent.

Eslinger was a member of an offensive line that only allowed 46 sacks in four seasons, the lowest total of any B1G line during that stretch. Eslinger was penalized very little for a lineman who saw as much playing time as he did.

But maybe the biggest accomplishment for the Gopher was that his team never once had a losing record in those four years, posting a 32-18 mark. The best year came in 2003 when Minnesota went 10-3, the program’s highest win total of the modern era.

Starting all four years on the offensive line in the B1G is quite an accomplishment by itself. But considering the amount of success he had every year at Minnesota, Eslinger’s career with the Gophers is one that would be tough to beat.

Dustin Schutte
Dustin grew up in the heart of Big Ten country and has been in sports media since 2010. He has been covering Big Ten football since 2014. You can follow him on Twitter: @SchutteCFB
RECENT ARTICLES
BIG TEN
Tough road: All 14 B1G teams rank in the Top 20 in schedule strength, per KenPom
BIG TEN
NCAA reveals contingency plans for replacing teams during Mach Madness tournament
BIG TEN
Mel Kiper Jr.'s latest mock draft features trade-heavy start to 2021 NFL Draft
BIG TEN
5-star DB, top player out of Michigan for 2022, sets date and time for commitment